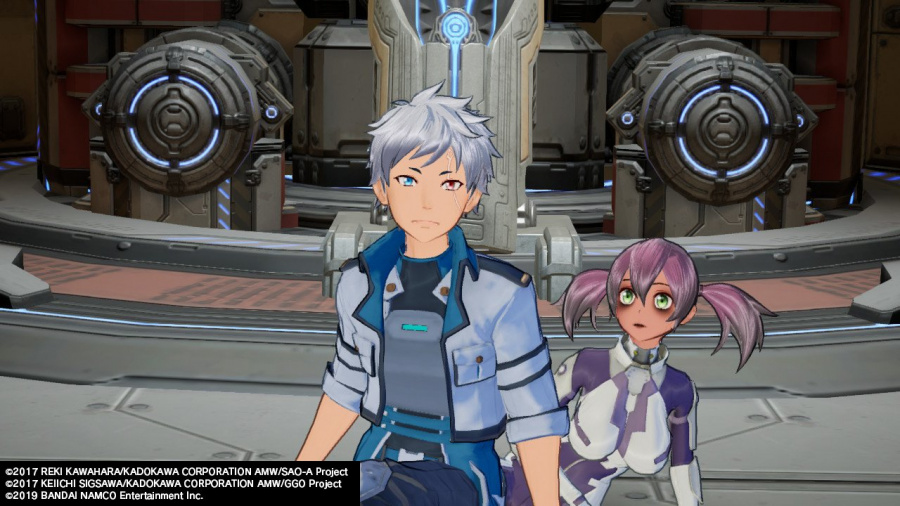 Sword Art Online has been around in some form or another since all the way back in the prehistoric times commonly referred to as 2002. Originally a series of light novels, it’s been praised for its exploration of themes relating to the intertwining of real and virtual worlds and the effect this has on the psyche and physicality of those who experience it in a long-term capacity. Set in the near future, it sees protagonist Kuzuto “Kirito” Kirigaya and his friends locked in a VR tournament in which death means actual death; their real-world bodies withering away in hospital beds, they have no choice but to ascend the 100 levels of Aincrad in order to be set free.

After this initial incident is resolved the heroes go on to duke it out with evil forces, laugh, love and form relationships together as they take part in various virtual reality massively multiplayer online games, or VRMMOs, across the several series that make up Sword Art Online as a whole. These VR tournaments and battles have changed themes over the course of Sword Art’s life and it’s the world of Gun Gale Online, a VRMMO based entirely around shooting ruddy great big guns, that’s the focus of this videogame adaptation. 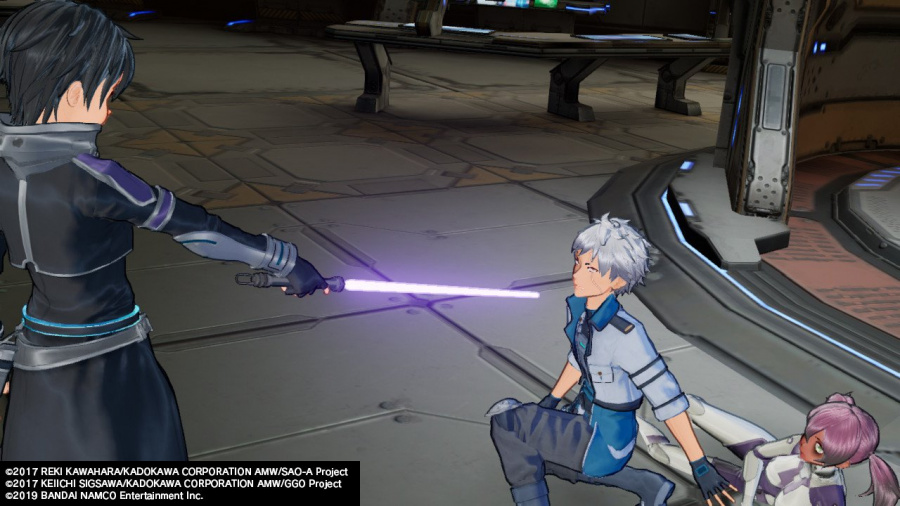 In terms of exploring issues such as the nature of love, life and death in a VR realm or the effect of sustained exposure to VR on the human psyche, Sword Art Online: Fatal Bullet does away with most of the series’ more cerebral flourishes in favour of giving you as many guns as you can possibly handle and letting you shoot massive robots in their faces repeatedly in a variety of offline and online modes whilst keeping the melodrama – and there’s a lot of very slow-moving melodrama here – firmly grounded in oddly misogynistic conversations, teen relationships and subservient robot ladies territory.

Indeed, Sword Art Online has also often been criticised for its attitudes to women, who tend to exist or survive in order to placate men. For the most part, it seems women’s futures are controlled and often roundly cut short because of the “heroic” decisions of the male characters, and it doesn’t take long for misogyny to raise its head in this game in the form of a new character, Basalt Joe, who’s introduced early on in the plot and is, for all intents and purposes, a grubby middle-aged man with a worrying fixation on young girls, their bodies and the idea of owning them completely.

In something of a departure for the series, rather than assuming the role of a Sword Art Online character, here you create your very own avatar with which to engage the world, planting you right in the middle of the action as a blank slate for the first time. There is an unlockable Kirito mode available as you progress through the story – complete with its very own ending – but to begin with, you have an all-new identity. 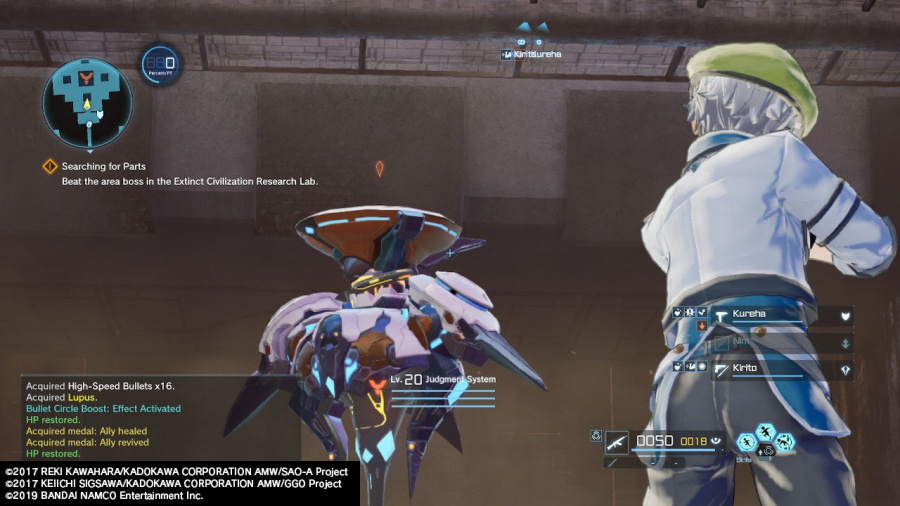 The story begins with your carefully created character (there’s a robust creation suite on offer here, especially if you like to spend time making sure your boobs are just the right size) winning a rare item in their very first game of Gun Gale Online, which turns out to be an ArFA-SYS robot, or Type X, which takes you as its master as soon as it clocks you for the first time. The Type X will be your fighting companion in Gun Gale Online; the most advanced robot of its kind, everyone wants a piece of it but it’s all yours and you’re almost immediately whisked back to the character creation suite to give it a name and make sure it’s proportioned to your tastes. You can even give it pocket money if you like, so it can buy things. No, really.

From here, Sword Art Online: Fatal Bullet proceeds to spend in the region of around an hour slowly explaining its various systems to you whilst introducing a cast of characters no doubt familiar to fans of the series. It’s glacial stuff and isn’t helped by the fact that in the aftermath of such a long tutorial we still didn’t know how to equip new weapons or have the gear we found in our first match evaluated without having to resort to looking it up. There are lots of menus and access points to get your head around here, points to assign, gadgets and skills to unlock and level-up and XP to spend. There’s crafting, customisation and clothing galore, and you can even make your own outfits. The wealth of guns at your disposal can all be upgraded and fitted with as many different boons and traits as you could possibly imagine and at the end of every match you play you’ll be hammered with stuff to sift through in your inventory, walking off the battlefield with all-sorts falling out of your pockets. It really is all quite overwhelming. 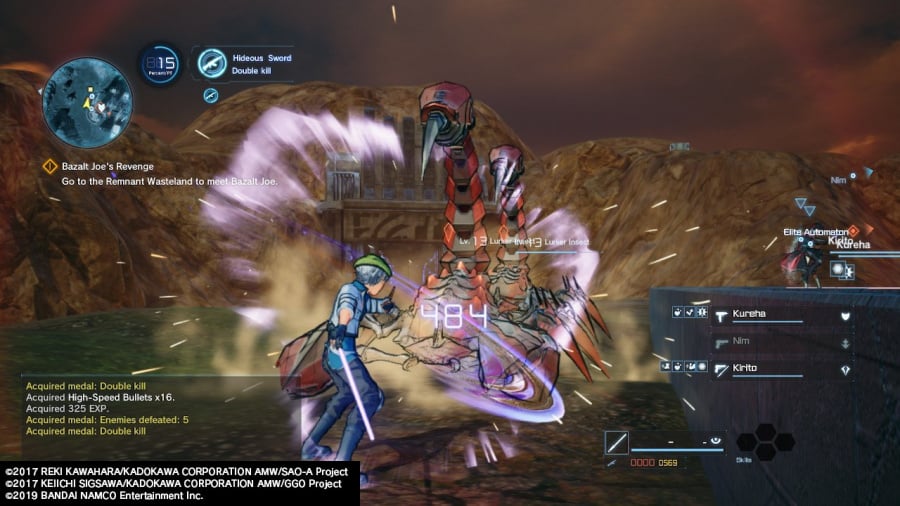 Most of this would be fine of course if it wasn’t for the fact that the actual gameplay in Sword Art Online: Fatal Bullet, the famous Gun Gale itself, is actually rather boring, bland and repetitive stuff. Arenas tend to vary between the tiled corridors of an industrial complex – grey room following grey corridor, following grey room – or endless featureless tundra filled with identikit enemies who may occasionally vary in colour but generally always stick to the same combat pattern of standing about in exposed areas shooting at you until you kill them. To be fair, they do occasionally do stunt rolls, but rarely to anywhere that gets them out of harm’s way.

Alongside the wealth of traditional weaponry at your disposal – machineguns, sniper rifles, pistols and rocket launchers – you’re also equipped with the Ultimate Fibers Gun (or UFG for short), which you can use to fire at a location and then transport yourself there via a magical laser tether. As a means of traversal, it’s certainly got potential, but it’s never utilised in any meaningful way and it’s actually its secondary function – knocking airborne enemies out of the sky then nicking bits off their bodies for equipment – that you’ll find yourself using for the most part.

The arena combat in Sword Art Online: Fatal Bullet reminds us of nothing more than when you decide to “go loud” in any Metal Gear Solid game pre-V. There’s that very same feeling of unease. You’ve got all the latest equipment, you’re armed to the absolute teeth, you’ve got a gadget for every occasion stuffed into your trousers, but you still can’t shake the feeling that the controls are going to let you down when the heat gets turned up. 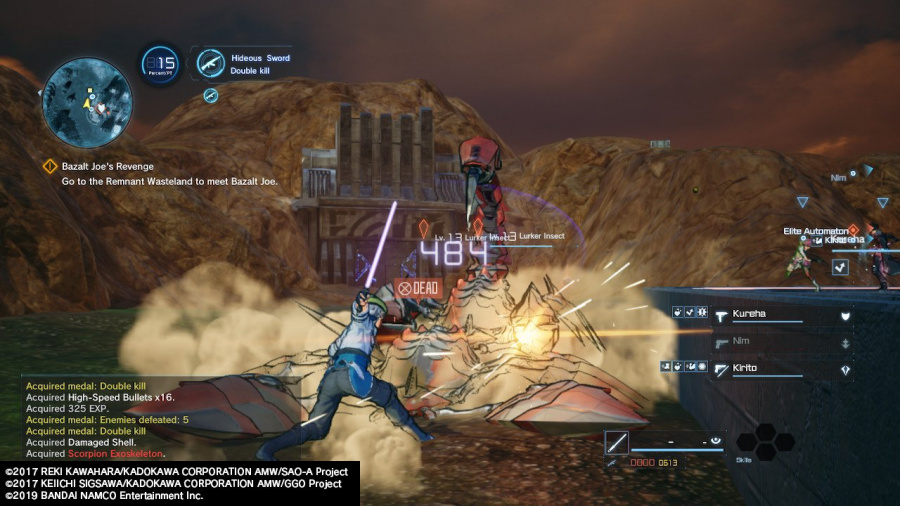 Everything is slightly more awkward than it needs to be here; even throwing a grenade – which requires you to tap the right shoulder button to get to gadgets, then hold it in, press whichever face button you’ve assigned to grenades and aim in roughly the area you want it to go, which it usually won’t – is painful. You can dodge out of the way and do a little forward roll, but neither of these manoeuvres is 100% guaranteed to get you out of harm’s way. You can also crouch behind things, which is, we understand, universally regarded as a good thing to do if you’re being shot at, but you can’t shoot over barriers, so when you want to return fire you’ll need to get back out there, fully exposed, take a shot and move again.

The shooting also feels rather imprecise with no tangible feedback, even with the ‘assisted’ mode engaged, and this is partially down to the fact that enemies don’t react to being shot beyond the obligatory damage numbers floating out of their bodies. The guns also tend to feel light and don’t have any real bite or satisfying noise to them, which is a real shame because a lot of time and effort has obviously been spent modelling them and providing as much information as you could ever want as you purchase them from the game’s store.

Nevertheless, if you’re willing to forgive Sword Art Online: Fatal Bullet its long and drawn out melodramatic sequences, bland level and enemy design and slightly clunky combat systems, there is plenty for you to sink your very forgiving teeth into here. The aforementioned customisation options are deep and you can gear and spec your avatar up in an impressive number of ways. XP earned by defeating enemies can be spent on levelling-up the skills required to handle better guns and accessories that grant you special tactical effects. CP can be poured into six different areas of growth – the usual strength, vitality, intelligence, etc – and the weapon and outfit customisation really is almost endless. 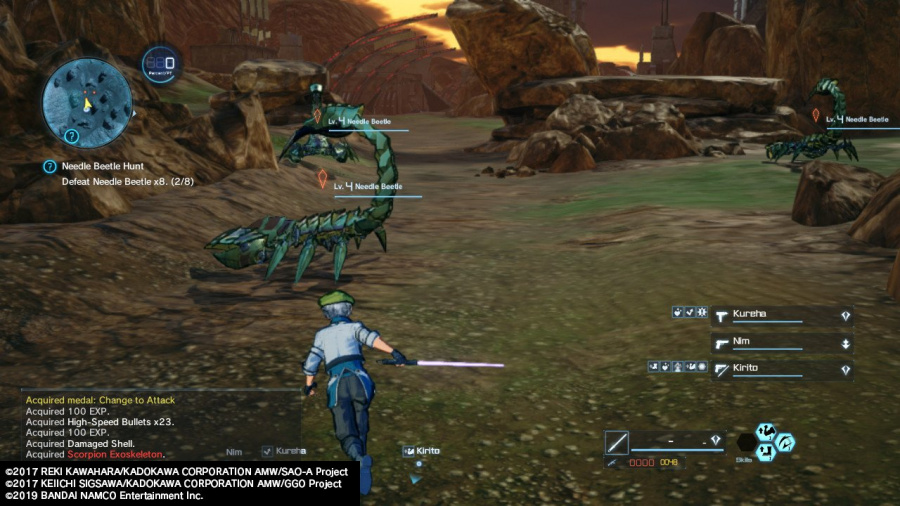 Returning to SBC GLocken, the VR world in which you live outside of the VR tournament in which you partake, you’ll always have a ton of merchandise to sell for credits to use for endless tinkering. Your Type X is also fully customisable and levels-up alongside you, and you’ll certainly be kept busy organising both it and yourself for the next quest or battle.

In terms of modes there’s an impressive number of things to do, from solo story missions, side quests and bug or treasure hunts, to co-op battles with up to 3 other human players (and their Type-X companions) and a PvP Mark mode, which sees one specific human player with a bounty placed on their head being hunted by other players for a big prize. One unfortunate thing we did also notice over the course of this review is that currently the online modes seem pretty sparsely populated and getting into a game or joining up with other human players was a real hit or miss affair, at least in our experience. 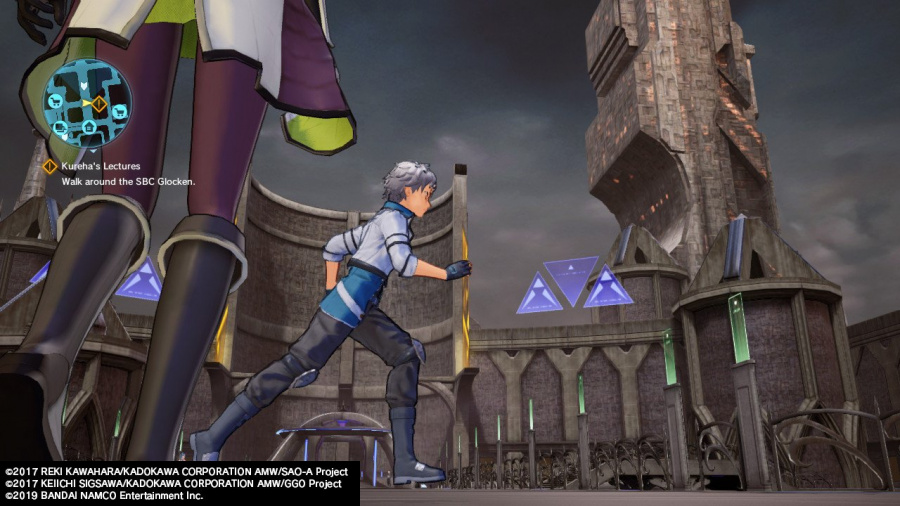 Fans of the series are, obviously, guaranteed to get much more out of what’s on offer here as they’ll likely be much more engaged in the drama that’s wrapped around the gameplay, and with that aforementioned unlockable Kirito mode and multiple endings to see there’s certainly plenty of story here for those who’re into it. For everyone else, if you can somehow ignore the often troubling attitudes to female characters, there’s still an okay experience to be had if you’re really, really into shooting stuff and hoovering up collectables in between long breaks for interminable chatter between Sword Art Online’s cast of characters.

In terms of the port itself, in both portable and docked modes, Sword Art Online: Fatal Bullet runs pretty much flawlessly on Switch. There’s a very definite blurring of the image in handheld but with a huge game that looks as good as this often can it’s not really a big surprise to see the resolution dropped for portable play, and, although the image is much sharper docked, it still looks good in both modes. Furthermore, we didn’t notice any framerate problems or bugs in our time in SBC Glocken.

THE Nvidia GeForce Now service has gotten off to a strong start and while it may lose some games alo [...]

ZELDA Breath of the Wild 2 is set to be another big seller for Nintendo, whose Switch console will b [...]

XBOX ONE fans have seen a selection of new free Xbox Live games announced ahead of the Games with Go [...]

PS4 games list has taken a blow with an exclusive heading to the Xbox One soon, but the PlayStation [...]

PS Plus March 2020: Great PS4 news ahead of PlayStation Plus free games reveal

PLAYSTATION PLUS fans have been delivered great PS4 news ahead of the PS Plus March 2020 free games [...]

First Run Of Legendary T-Shirts Are Being Added To Travis Strikes...