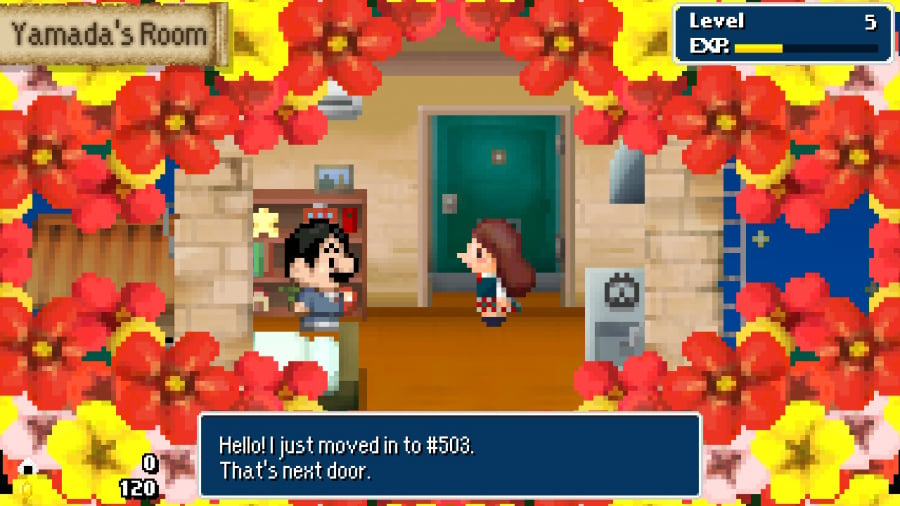 Video games have been knocking around for so long now that they’ve even started making games about making games. From project management of Game Dev Tycoon to the silly Flash-based antics of Game Corp, the finer points of software development has already received the meta treatment. By that thinking, Dandy Dungeon – Legend of Brave Yamada should be nothing to shout about – especially when you learn it’s a flippin’ roguelite as well – but then you spend a little time with the titular Yamada and you discover just how well its pleasantly odd elements gel together.

Originally designed for smartphones back in 2017, Dandy Dungeon uses its ‘pick-up-and-play’ origins to create something that’s engrossing in short bursts and during extended play. You’re not just playing a game here; you’re playing someone else’s game in a game. That someone is Yamada, an unhappy 36-year-old software developer working for a shady publisher who keeps himself sane by programming his own project on the side. His game is a Bomberman-styled roguelite about a brave knight who battles monsters with nary a glimpse of fear in his eyes. Naturally, he’s everything the reclusive and awkward Yamada is not. 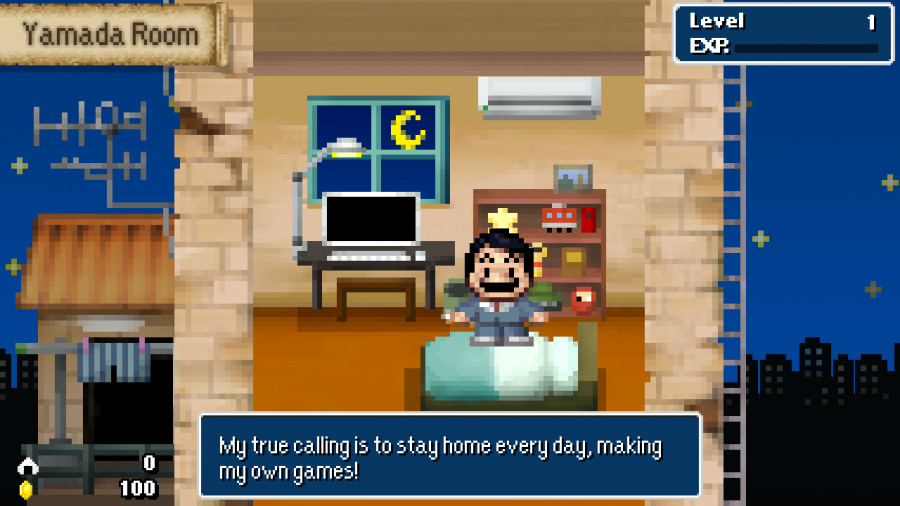 With the fourth-wall almost instantly broken, you’re recruited to help play the game as Yamada adds new features. Completing runs successfully will upgrade Yamada, enabling him to improve his project over time. For the first hour or so, this serves as a neat tutorial, with everything from permadeath to online leaderboards introduced via this cute little meta concept. Our odd little protagonist never really leaves his room (or wears much more than his underwear); he’s a clichéd hermit Otaku who falls in love with an 18-year-old atypical Japanese schoolgirl next door.

Upgrading Yamada will also improve his romantic confidence, thus progressing his ever-so-slightly creepy interest in his new neighbour. The game itself is very self-referential and has an irreverent humour that laughs at Yamada’s sad little life while still managing to make him likeable and relatable. With his boss having discovered his continued absence at work and his secret project, Yamada’s game is subsequently hacked, forcing him to face three sub-bosses before throwing down with the big bad himself in virtual form. The fact Dandy Dungeon manages to laugh a gaming’s biggest tropes while still using them to its advantage is a feat all by itself. 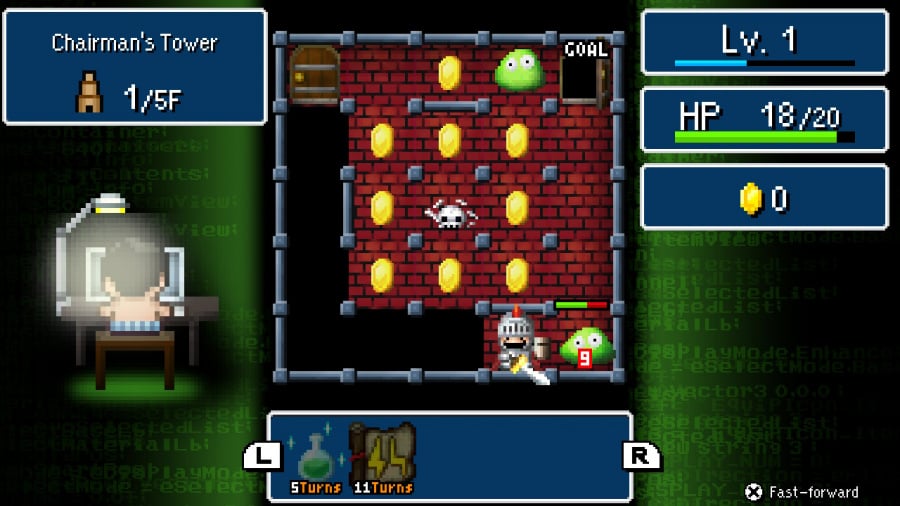 The other half of Dandy Dungeon is the game within, and it’s here that the classic roguelike formula is given a bit of cheeky twist. Each dungeon is broken into floors with each floor existing as a top-down, single-screen map. You don’t control the Hero in real-time; instead, you draw a path for him around the map from the start point to the exit. On the way you’ll meet enemies, collect treasures and pick up consumable items. Once the path is complete, the Hero will begin moving and battling automatically. What’s brilliant about the whole concept is how you’re having to think on your feet.

As soon as you start moving the cursor around the screen (you can do this with the analogue stick or via the touchscreen) a timer will start counting down, so you’ll need to work out the optimal path through the map before the clock hits zero and you die. If you fail to walk across any tiles, they’ll turn to flames and attack you when you reach the exit, so the quickest route can often be the most punishing. As the Hero progresses, you can support him with health potions, antidotes and special scrolls that enshroud him in a magical barrier or send out a shockwave of thunder.

The latter is a tempting power to use as soon as you encounter a tasty looking room full of enemies, but it’s often better to hold back on using it until you reach a Danger Room. These are floors that usually filled with enemies and destructive objects such as pillars, so it pays to keep this trump card ready for the right moment. Fallen enemies and broken obstacles also drop resources, which can then be used with gold to upgrade weapons and armour in-between runs. 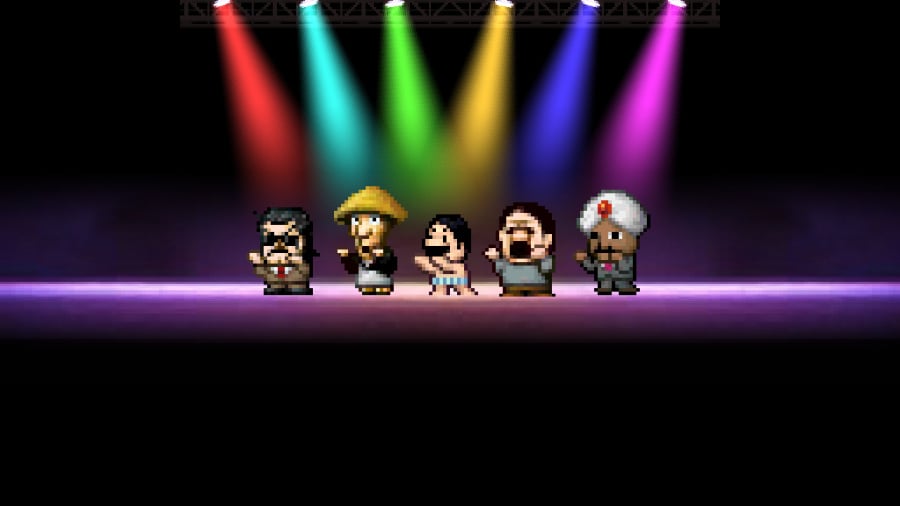 The Hero’s level resets after every run, so his stats periodically rise and fall as you start and finish each dungeon. Any gear you collect is yours to carry over to the next run, so even if you die you won’t restart without any treasures to your name. The key is to use gold while you have it and get your gear suitably upgraded. New weapons and armour can be unlocked by clearing certain dungeons. Story dungeons have set layouts, but there’s also a randomised dungeon that’s effectively an endless stream of floors for those that like to tick even more modern RPG boxes in one package.

Having shaken off the free-to-play nature of its origins – Yamada had a set amount of stamina on mobile, meaning he could only code his game for a certain amount of time each day – Dandy Dungeon embraces all of the brilliant little quirks that make it a great game in its own right. The light-hearted take on one man’s inability to separate reality from fantasy really works as a great conceit for the overall game, while the puzzle-like approach to combat and exploration makes the now rather tired world of roguelites feel instantly more refreshing. Don’t let this little gem pass you by.