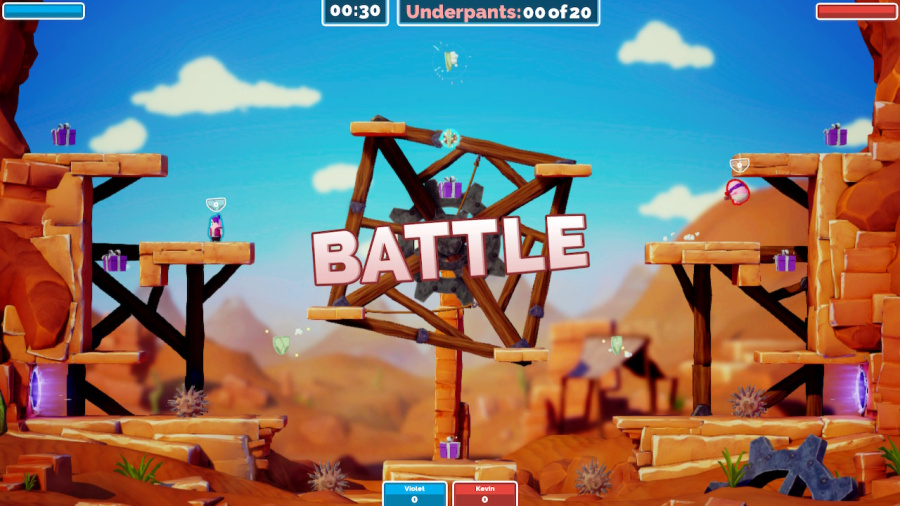 Juicy Cupcakes’ Brief Battles sees you and up to three pals go head to head in a variety of butt-based competitive and co-op duels using powers gleaned from magical pairs of pants. You’ll bound around its arenas, clinging to walls and ceilings, jumping through portals, fending off all manner of weird alien beasties and avoiding environmental obstacles as you attempt to flatten your foes by smashing down into them with your signature super-powered ass smash manoeuvre.

Designed to be enjoyed by up to four players in local multiplayer only, Brief Battles sees its anarchic brand of action take place over fifty arenas set across five different biomes in four main competitive modes. You’ve got your classic free-for-all deathmatch action, last man standing, a manic underpants collection dash and Hold the Gold where you… well, you run around in a pair of gold pants for as long as possible without one of your mates nicking them, first person to wear them for twenty seconds wins. It’s all terribly serious, you see. 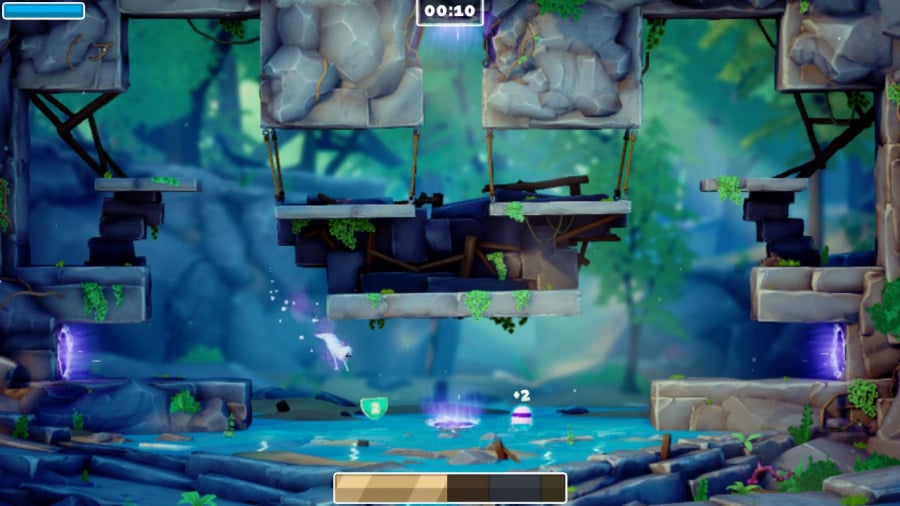 These central modes are further bolstered by a bunch of single-player oriented offerings that see lone (under)pant-lovers collect nether-garments from across a variety of increasingly hostile stages or shooting little wooden targets with the various offensive powers bestowed on them by the selection of powered-up panties the game offers. Indeed, you’ve got quite a few offensive options as you blast around stages here including toxic green slime shooting pants, flamethrowers, ice shooters, shields, healing briefs and, let’s not forget, those fetching Leopard-skin underlinens that enable you to attack your opponents in a blast of orange fury. There are also a few trick pairs of pants that’ll see you cause yourself some mischief, so beware what pair you choose to wear. Rounding out the modes on offer here are Butt-em-up Battles and Endless Butt-Em-Up, arena wave and endless horde modes which let you play in either single or two-player co-operatively.

The whole pants thing may seem as though it’s the star of the show on initial inspection, however it’s really the random assortment of powers bestowed on you via the briefs combined with the game’s pretty unique method of traversal that gives it staying power and opens the whole thing up to a deeper level of tactical play. Bounding around arenas as any one of the six blobbly little characters you can select you have two different jumps available to you, a normal jump and a big daft slow jump that enables you to get quite a bit more air. Combining these enables you to deftly shift direction as you propel yourself around and, more importantly, stick to any surface you can touch. The walls, ceiling, undersides and edges of platforms are all fully traversable here, you see. It takes some getting used to for sure, using your small jump to let go off edges, moving around and attaching yourself someplace else, but once you get the hang of it multiple tactical options begin to open themselves up. 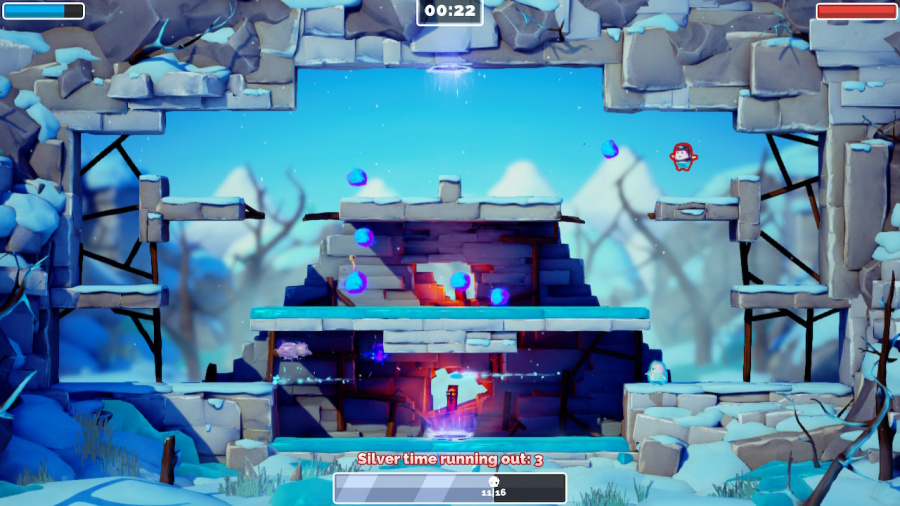 You’ll soon find yourself using the sides of stages to line up a shot at alien enemies and friends or perhaps positioning yourself on a surface above a foe to unleash a vicious pant pound via the ZR button. It’s also impossible to shoot your brief-based weapons directly up or down, a small detail but an important one, with the weapons on offer each coming with their own projectile range and varying arcs, you’ll need to quickly think about where you’re at, how far you can fire and what’s around you at all times if you’re to fulfil your destiny and emerge as the one true knicker king.

It’s when all the various elements of Brief Battles combine that it truly beings to shine, with the various ballbriggan-based power-ups, numerous environmental obstacles, anarchic traversal methods and uniformly well-designed stages coming together to ensure that things get pleasingly out of hand with a full compliment of players. At its best it has that manic Smash Bros. energy, that Towerfall magic that keeps you coming back for more but this is absolutely dependant on you managing to round up as many pals as you can. We found that modes tended to suffer somewhat with only two people playing – both Knockout and Hold the Gold especially feeling rather empty when the numbers of combatants were reduced. 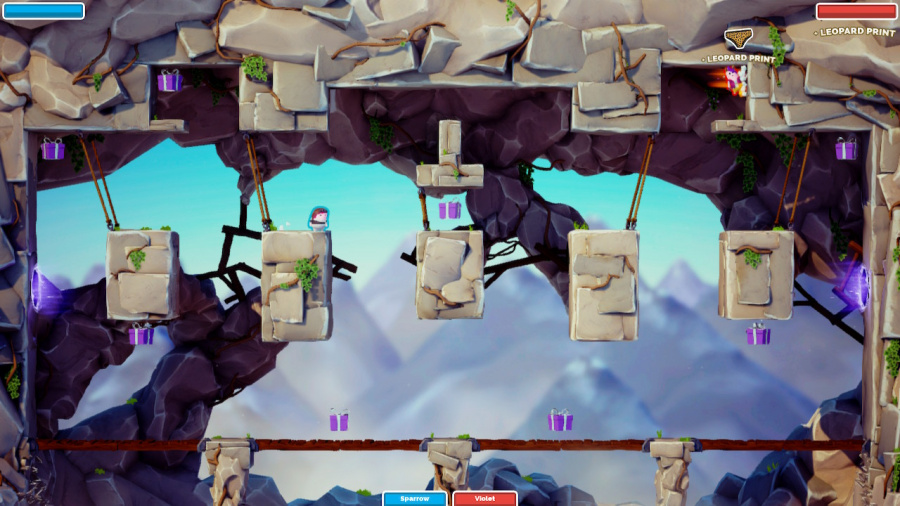 The single player options too, although perfectly reasonable and providing a decent amount of challenge, can grow old pretty quickly. They’re excellent for honing your skills but we found ourselves growing tired of them during the handful of hours it took us to finish them all. It’s a shame that Juicy Cupcakes weren’t able to implement an online component to ensure you can always max out the number of players on a stage, or at least have the option of filling those human spots with AI as, when you do manage to get a full squad together the action here really does become impressively raucous.

There are a few other niggling problems we had during our time playing the game, there are perhaps a few too many loading screens as you zip around menus and between bouts and we also couldn’t find any option to allow us to switch from one controller to separate joy cons in-game – having to jump out to the homescreen and change up our grip order in the consoles settings is a bit of a pain.

Overall, however, this is a fun little local multiplayer effort that absolutely achieves what it sets out to when you manage to get a big bunch of pals together. It’s got a nice cutesy graphical style, decent music across its various stages and is priced reasonably enough that anyone looking for a new couch party effort won’t be taking too big of a risk in giving this one a go. It also runs perfectly in both docked and handheld modes and we didn’t encounter any framerate issues or bugs as we blasted through its various modes and stages. 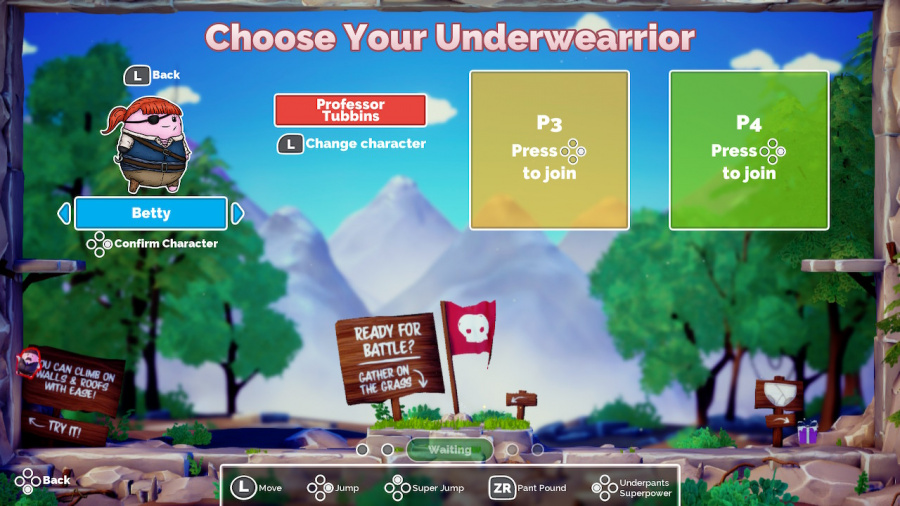 We should also mention the impressive number of accessibility tweaks you’ll find in the settings menu of Brief Battles, with player outlines, reduced game speed, easy mode and a high contrast setting all available to help folk having trouble with the default difficulty. It’s nice to see the extra effort being made to make the game inclusive for players of all abilities here.

Brief Battles is a raucous little game that provides another option for Switch players looking for some decent four player, local multiplayer party times. It’s easy to pick up and – owing to that clever mix of pant-powers, environmental obstacles and unique style of traversal – has a level of depth that introduces a pleasing amount of tactics for dedicated players. It’s also priced really reasonably so is well worth taking a punt on if you’re regularly inundated with friends wanting to get some couch co-op action on the go.

CALL of Duty Modern Warfare season 3 release date has been revealed, with new content for COD MW and [...]

RESIDENT Evil 2 Remake makes you hold your breath, while Resident Evil 3 Remake leaves you out of br [...]

CALL of Duty Modern Warfare and Warzone are due some major updates, as Infinity Ward gets ready to m [...]

THE Valorant closed beta begins next week and gamers can get the chance to join in by earning keys v [...]

What Remaining Wii U Games Do You Want Ported To Switch?