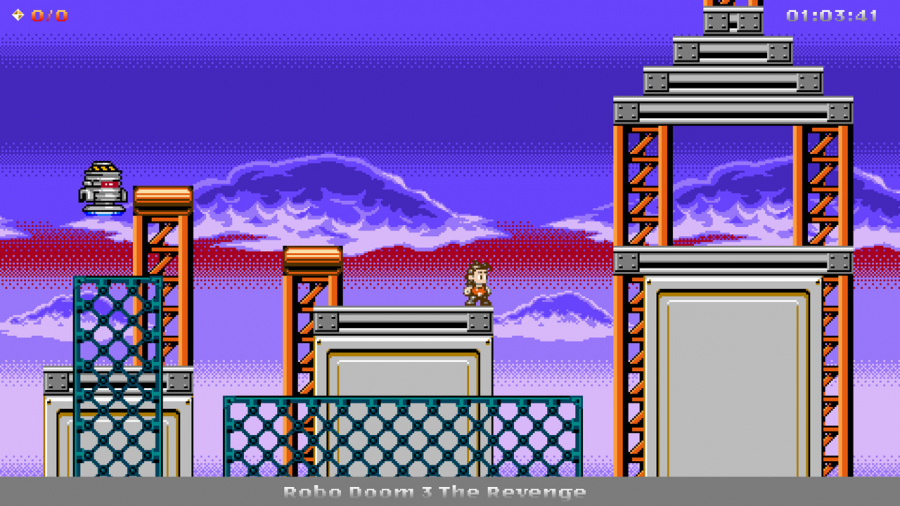 The definition of karma is giving a reviewer who has handed out their share of 4s and 6s in the last month a review copy of a platform game creator and effectively saying ‘you do better’. While PlataGo! presents an ample feature set that leaves mean critical types with few excuses for their terrible creations, a combination of interface frustrations and generic audio and visual building blocks unfortunately put a cap on the fun, and another middling mark in the score dropdown.

Hewing close to the Super Mario Maker template, PlataGo! sees you placing terrain, platforms, pickups, enemies and obstacles on a grid to create your own platforming challenges to be shared online. PlataGo! ships with a feature-set that is in some ways richer than the Wii U edition of the Nintendo plumber’s toolkit – the availability of slopes, auto-scroll/locked cameras and decorative background and foreground layer editing bring it more in line with the imminent sequel. Similarly, individual levels can have different ‘regions’ with different gameplay rules, and levels can be strung together to make rudimentary campaigns. 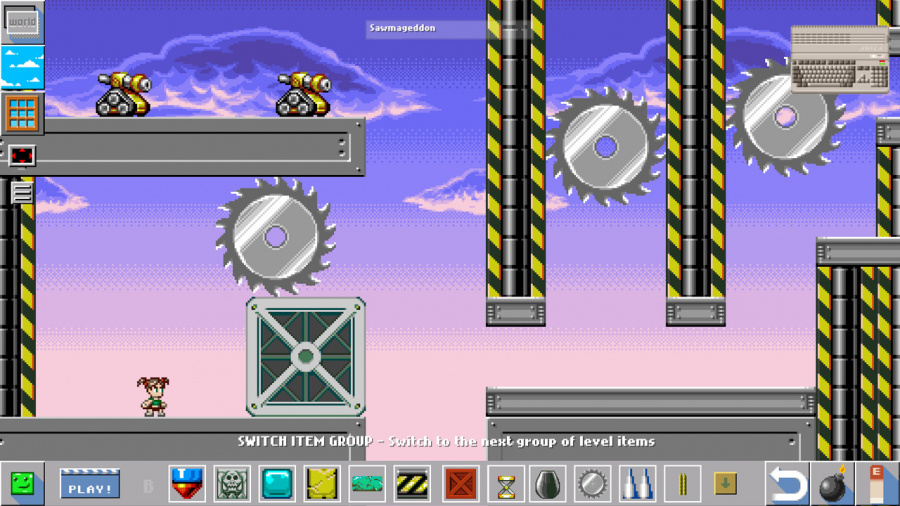 A few options allow you to take the platforming into less ‘core Mario’-like territory – the availability of jetpacks, pushable blocks, gravity flippers, bombs and weapons, for instance. The toolset is definitely quite strong in terms of platforming obstacles – blocks can move, drop, get blown up and launch the player, and there are switches and keycards to hide, and buzzsaws, spikes, flames, hazardous liquids and turrets to deviously set-up. However, the selection of enemies (sorted in the UI as flying, walking, bouncing and shooting) is visually and functionally dull.

Docked, you’ll be using a joystick-controlled cursor to drop each item into place – using ‘a’ to place items in the world, while pressing ‘b’ in menus allows you to tweak attributes of each tool (defining how far a moving platform should travel with a slider, for instance). A few handy shortcuts (undo/redo on the shoulders, camera movement on the lower directions) keep this control mode from being too frustrating, but it can be fatiguing to wrestle with the cursor.

Unfortunately, the touchscreen implementation doesn’t necessarily make handheld play any more comfortable. The most obvious issue is that the UI hasn’t been rethought around the 6.2-inch screen – the icons are too small and there are too many functions per menu level. More subtly, response time seems imperfect, undermining overall fluidity – this can be seen in how the free-painting of blocks the interface defaults to won’t result in an uninterrupted line if you drag your finger across the screen. These performance hiccups are mirrored by the unsettling loading pause that appears to accompany the player respawning on larger, more complex levels in play mode. 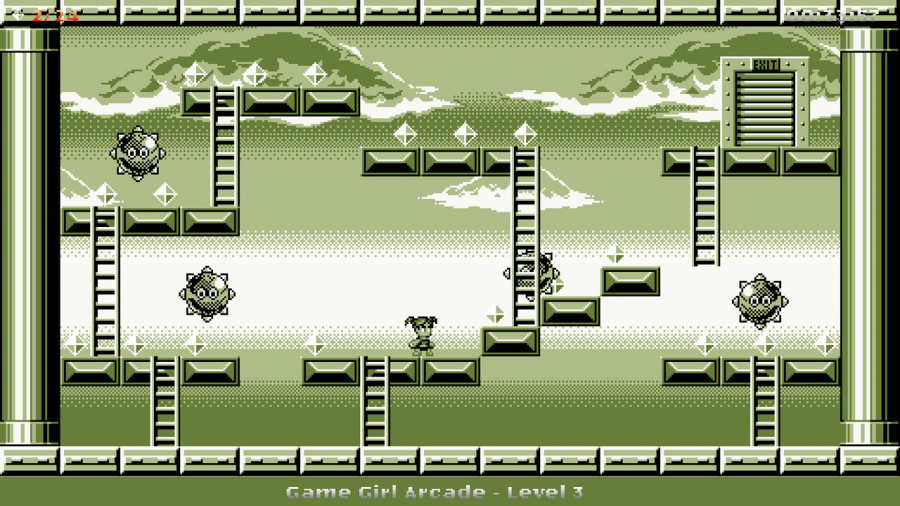 These control factors provide a troubled starting point for any creation that is more ambitious in gameplay or visual terms, but the bigger problem for these kinds of levels is how the tool currently handles those tweakable attributes on the ‘b’ button. You cannot simply edit the attributes of anything you place – you must define those attributes when you place, and start from scratch each time you want to edit.

Considering that the available tools skew towards precision platforming gauntlets (as do the relatively decent, but irritatingly un-editable example levels provided), this choice makes tweaking obstacle placement and timing almost prohibitively time-consuming. Even placing the player spawn closer to the section of the level you want to playtest is subject to the same issue (the ‘b’ button allows you to tweak the height of your jump, add double/triple/wall jumps, run speed and more – but write it all down, because you’ll have to re-enter it all the next time you place it). A related problem – a lack of a way to select and move anything you place – compounds the issue, and can result in you building yourself into a corner. 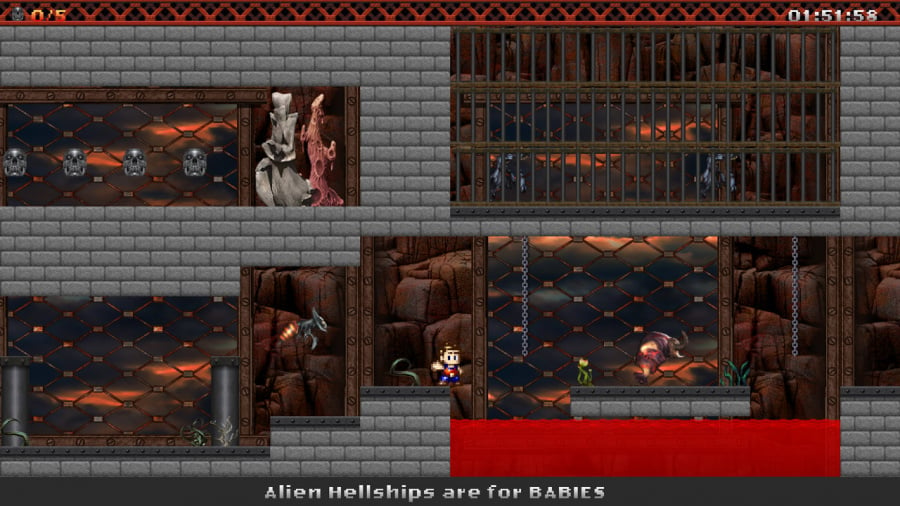 Even supposing that these UI shortcomings can be patched out, there’s ultimately an underlying problem with its appeal that will probably never be corrected. PlataGo! offers a lot of visual styles that are confident approximations of several 8 and 16-bit feature sets (Apple II, ZX Spectrum, Commodore 64, NES, Amiga, Gameboy, SNES), with a functional selection of background and tile theming within that. However, with its faceless kid protagonists and archetypical enemy and tile designs, there’s nothing specific being referenced other than some kind of theoretical, lowest-common-denominator platform game.

In this way, there’s no getting past the fact that the fantasy PlataGo! sells you is so many magnitudes less exciting than its competition, even if the features available put a brave face on keeping pace. You haven’t been given the building blocks to create the next instalment of a decades-old gaming classic – you’ve been given the tools to create an obscure bootleg platformer on an AliExpress Famiclone, or the free game on the cover disk of the March 1992 edition of ‘Amiga Conquest’.

As a result, you’ll always be labouring in PlataGo! knowing there is a low ceiling on the interest that your creation will attract because of the generic and often ugly presentation available to you. Sure, tomorrow’s great creators need spaces to make today’s iffy early drafts, and you may get a kick from the challenge of creating something intricate within the limitations. But when other solutions already exist to help you create things other people may actually want to play, maybe the Switch version of PlataGo! is a solution in search of a problem.

PlataGo! has some value as a learning tool for would-be designers of all ages, and it offers a surprising depth of tweakable options to help you put an individual stamp on your levels (and campaigns). However, if the low quality, generic feel of the graphical and audio assets don’t quickly sap your enthusiasm, the frustration of wrestling with the interface to fine-tune more complex creations will.