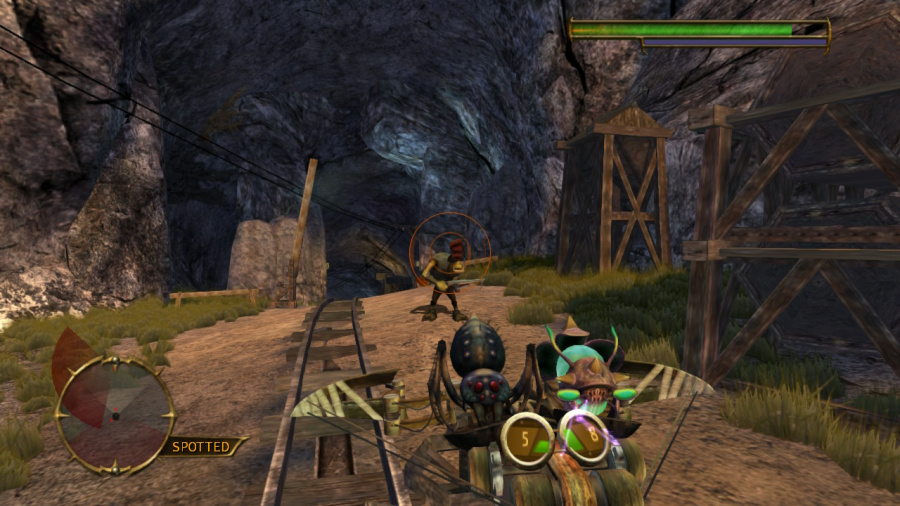 Oddworld: Stranger’s Wrath originally released for the Xbox in January 2005. Fifteen years on, we now have a Nintendo Switch version that feels like a fresh and interesting look at the Oddworld franchise, and one that’s aged extremely well. Not only has the game ported nicely to the console, the story and gameplay feel like they could have been ripped out of a game released for the first time in 2020.

In Oddworld: Stranger’s Wrath, players take on the role of the Stranger, a scary bounty hunter-type looking to make enough cash to pay for a mysterious surgery that he desperately needs. The story takes a little while to get going – and it doesn’t immediately feel like it fits within the Oddworld franchise – but once it does take flight, it’s easy to see that this is definitely an Oddworld game.

Oddworld: Stranger’s Wrath subverts expectations once again with its gameplay. This isn’t a platformer; it’s a first-person shooter with third-person action. Players can choose between the third-person camera, best for exploring the environment and getting between key areas, and first-person, which is ideal for shooting outlaws with the crossbow. Once again, this definitely doesn’t sound like an Oddworld game on paper, but it’s the ‘Oddworld’ take on these elements that make it part of the universe. 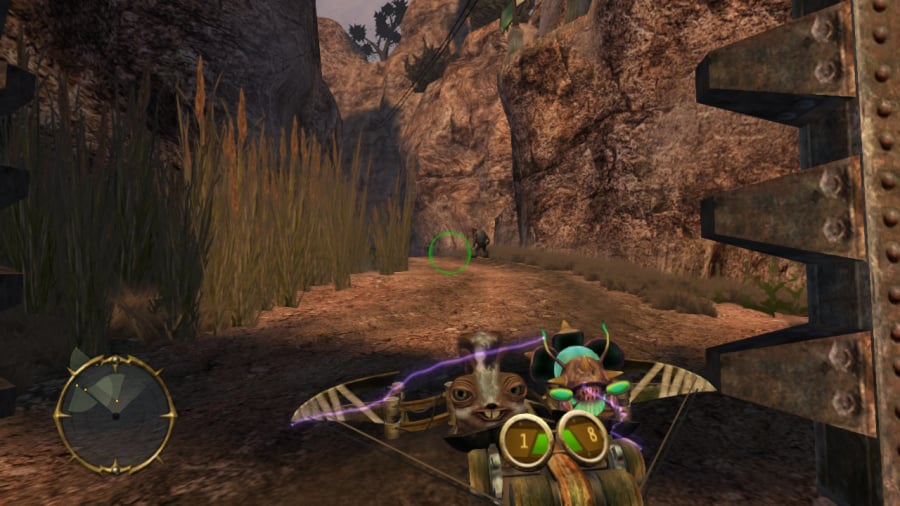 It’s possible to play through most of Oddworld: Stranger’s Wrath as a stealth game, but ironically, this proves to be something of a hindrance in the long run. It’s possible to sneak up on enemies by hiding in long grass or on rocky outcrops, using the different ammo types to lure them closer and take them down silently, but it almost never works as well as it should. More often than not, enemies easily spot you lurking in the grass and, once your cover is blown, every outlaw in the region seems to suddenly become aware of your present location and proceeds to run there and fill you with bullet holes.

It almost feels as if the game would play better if the stealth elements were completely removed, making it far more action-oriented. We had more success charging into battle when outlaws weren’t paying attention, pinning a few of them while we worked on stunning the rest, making them ready for capture. Most of the boss fights start with the Stranger revealing himself with a somewhat dramatic flair anyway, which sort of spoils the hard work you can put into sneaking up on enemies all the way there.

Still, moving about the world in third-person feels natural. The Stranger can run quickly between areas – essential given how surprisingly large the game’s world is – and slick melee attacks mean that moment-to-moment gameplay is quick and simple. The only criticism we have is for landing from heights; there’s no fall damage in Oddworld: Stranger’s Wrath, but when the Stranger drops too far, he will fall flat on his face. There are moments in the game where the developers have added deliberately high drops as part of the story, but any tension is quickly lost when the Stranger falls flat (like a pancake) with an accompanying splat noise. 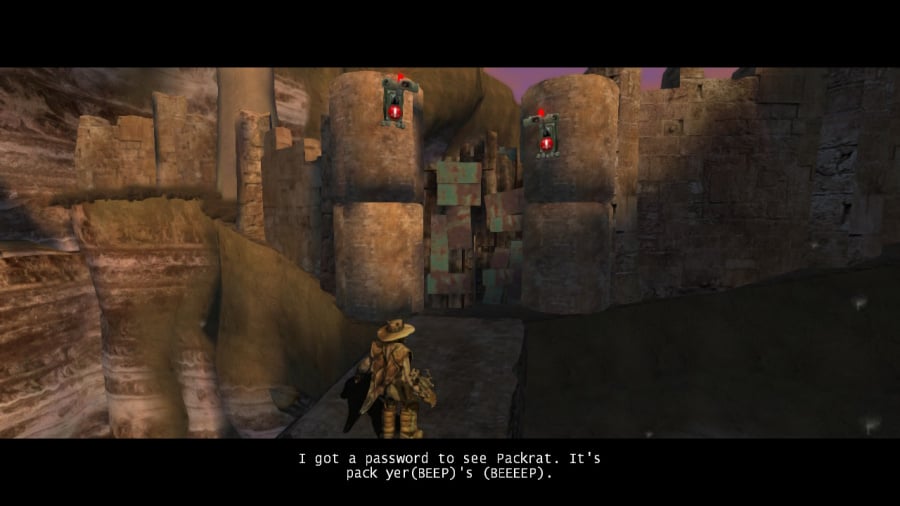 It’s impossible to fight effectively in the game without going into first-person, but switching between the first and third-person views can be a nuisance. The default perspective is third-person, but when enemies are nearby it’s far better to click the left joystick and aim through the Stranger’s eyes. The trouble is that this process feels clunky, and when you consider that Oddworld: Stranger’s Wrath can be played as a stealth game, it’s not as smooth as we’d like.

The Stranger uses a single weapon, his crossbow, but the ammo in its two barrels can be used for a number of things. Each ammo type is a living creature – a very ‘Oddworld’ touch – which players need to collect from nests dotted throughout the game in order to replenish their stocks. Running out of ammo in the middle of a fight is never a good thing, but luckily players have infinite Zappflys (the basic ammo) which can be used to capture more ammo or shock outlaws into submission.

Ammo types mimic the weapons you’d expect to see in a shooter game. The Fuzzle, for example, is a nasty little furry animal that will actively wait for an outlaw to approach it; it then bites them and distracts them, opening up a window of opportunity to take down said enemy. The Bolamite, on the other hand, captures foes in a sticky web, holding them down so that you can capture them – or, alternatively, you can use it to buy yourself some space and time in a heated battle. 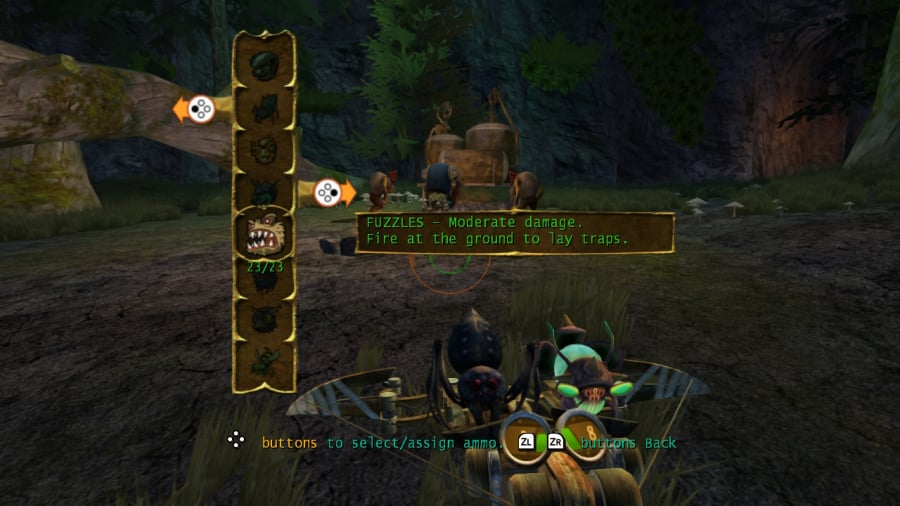 There are lethal and non-lethal ammo types, playing into the game’s bounty system. It’s easier to kill an enemy, but you’ll be awarded less cash. Pinning an enemy down or stunning them will only last for a short while – and they’ll take longer to capture – but you’ll get a lot more cash for your efforts. This system is also true of the boss outlaws that form the core missions of Oddworld: Stranger’s Wrath.

Most bounties feel unique. Yes, they’re all outlaw bosses that are holed up somewhere remote, but their appearance – and the final battle with them – add a flavour that makes each encounter much more fleshed-out and memorable.

One outlaw boss needs to have their stamina fully depleted multiple times before they fall down onto the same level as the player, keeping you on your toes the entire time. Another hides away in a cage on tracks, which players need to redirect down to their level by powering a series of switches before they can even fight them. One final example is an armour-encased outlaw boss. This boss can’t be shot at normally and is too fast to even get the space to aim at. Instead, players need to work out how to get the outlaw to turn around, exposing their only weakness: their back. Capturing rather than killing every outlaw boss in the game makes it much more challenging and fun. 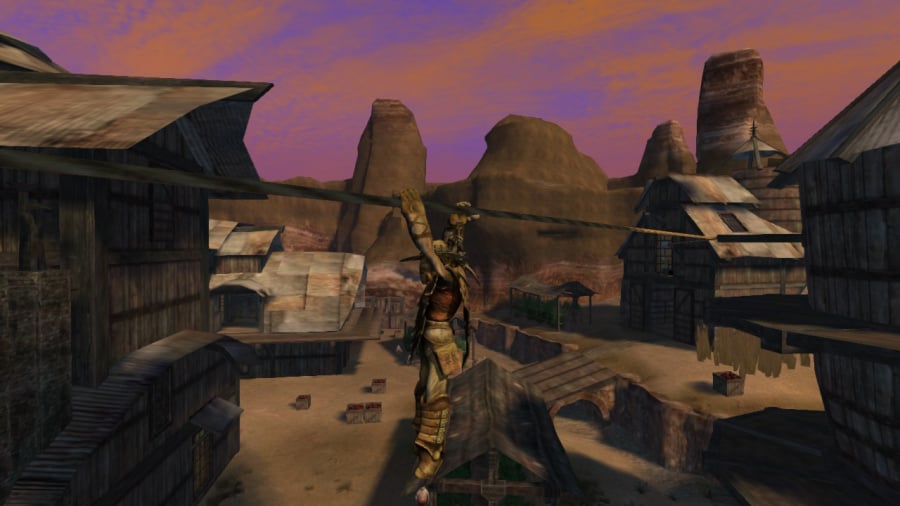 Each bounty will see players travel to a new area in the game, all of which link back around to the game’s main towns. This makes exploration a joy in Oddworld: Stranger’s Wrath because backtracking is kept to a minimum. Some bounties have certain prerequisites, and though the game has no on-screen prompt or market for this, the Stranger will talk about it, acting as a reminder for the task at hand. It sounds like a small touch, but it adds a lot to the world. Where other games would walk players through each step, Oddworld: Stranger’s Wrath gives you the room to figure things out for yourself.

There were only a few moments when we felt that some further direction was necessary in Oddworld: Stranger’s Wrath, but they were few and far between, and almost all towards the end of the game. This is the only area in the game that we could see being a barrier to progress for some players today, with most games now giving more clues and directions as to what players need to do next.

It’s worth spending a little longer praising the setting of this game, because it’s almost a character in its own right. While Oddworld: Abe’s Odyssey showed players a gritty industrial side to the universe, Oddworld: Stranger’s Wrath takes them somewhere entirely different. The setting is a series of backwater towns that personify Oddworld’s version of the wild west, though there are hints of the industrial environments lurking beneath the surface. It’s within these towns that players can collect bounties on notorious outlaws situated in the surrounding areas and bring them back, dead or alive. 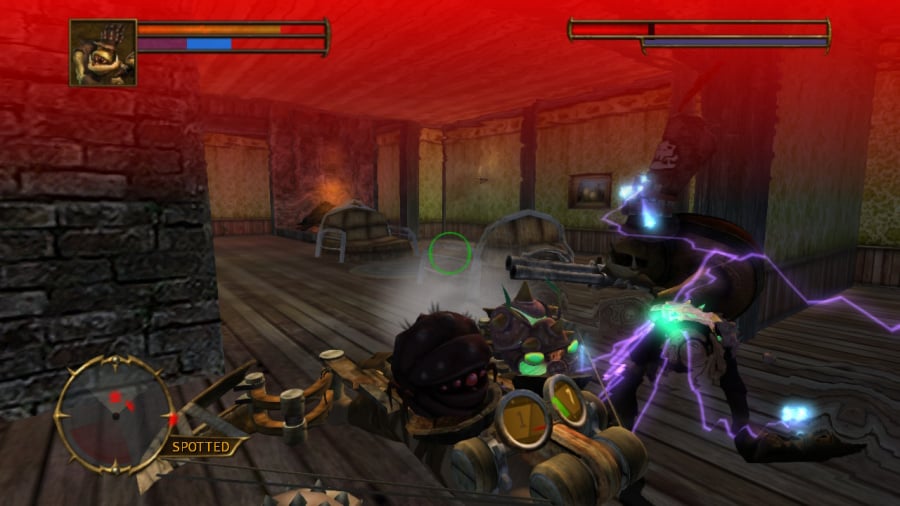 The sounds of Oddworld: Stranger’s Wrath play into this unique setting, bringing it to life. The soundtrack is filled with Oddworld versions of tracks that would feel at home in Red Dead Redemption. Even the sound of gunfire pings with the iconic notes of spaghetti westerns, giving the whole game the identity of a turn-of-the-century Oddworld epic.

Players looking for a classic ‘Oddworld’ game might be disappointed with Oddworld: Stranger’s Wrath. The game has its own identity while still remaining part of that unique universe, and that somehow makes it even more appealing – giving players a world to explore that feels much bigger than what you see of it. While the game has aged well for the most part, some imperfections have become more obvious with time. The stealth mechanics are nowhere near as fine-tuned as they should be, and can be ignored completely without compromising the player’s experience. A lack of instruction in the latter part of the story could also cause frustration, and the slapstick drop of falling from a height will never be something that fits with the game’s overall tone. Despite these rough edges, Oddworld: Stranger’s Wrath is still a joy to play on Switch, and if you didn’t experience it the first time around, it’s well worth a look now.