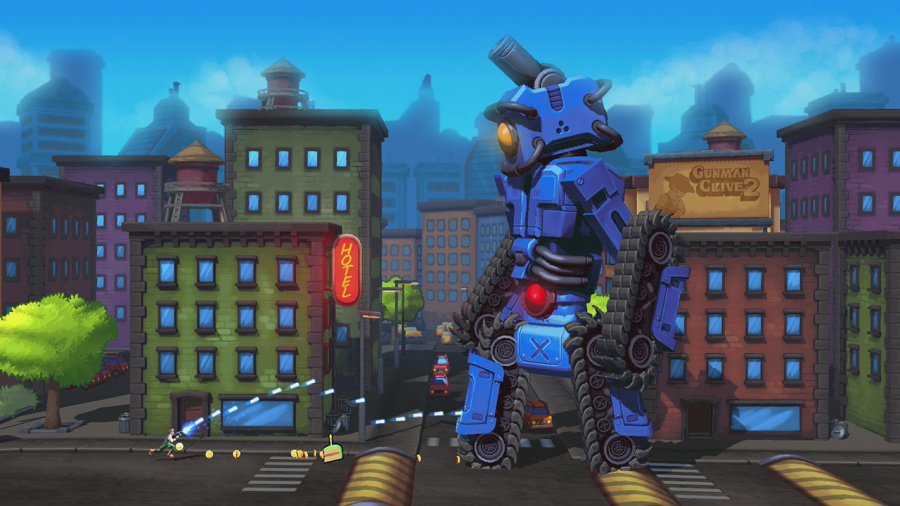 The announcement that Cuphead is Switch-bound was greeted with overwhelming approval from Nintendo fans, although there’s probably one person who’ll be slightly peeved to see the beautiful boss-battler landing on the handheld mid-April. You see, Mechstermination Force is the latest game from Bertil Hörberg – the Swedish developer behind the excellent little run-and-gun game Gunman Clive (and its sequel) – and, on paper, it shares plenty with Studio MDHR’s game. This is actually a smaller, more contained experience along the lines of Hörberg’s previous games and, in many ways, it may be a refreshing tonic for players turned off by Cuphead’s unforgiving difficulty, but the timing of its release is unfortunate because this is a fun little platforming boss-rush shooter with plenty of personality that deserves to be played. 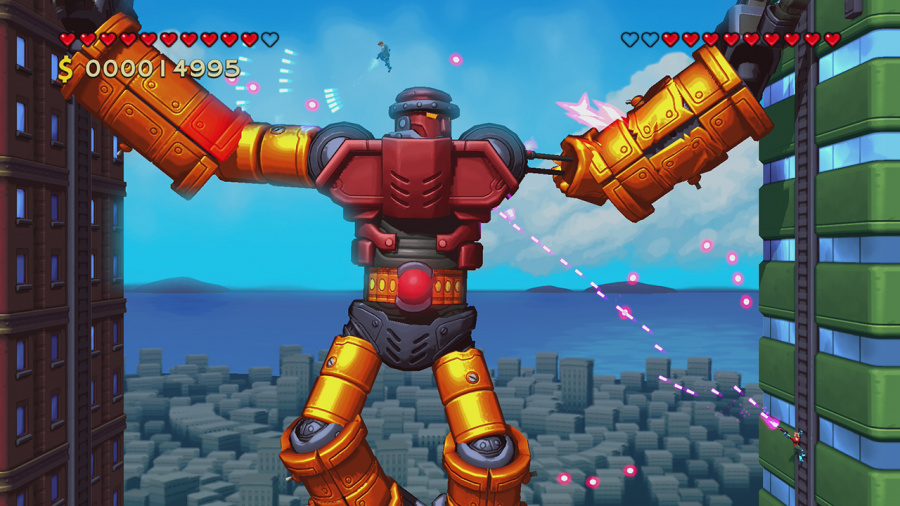 Choosing from one of four characters (they all handle identically, and you can even play as Gunman Clive if you own the HD Collection on Switch), you’ll be fighting an invasion of building-sized robots and returning to base camp between bouts where your injured buddies hang out and make comical excuses for their absenteeism. The chatter with your comrades features some excellent interstitial writing with nods to Gunman Clive and the absurdity of the situation. You needn’t talk to anybody if you just want to fight, but everyone’s got something amusing to say.

Controls are simple, with ‘B’ to jump and ‘Y’ to fire. Hitting ‘A’ cycles through your weapons and ‘X’ delivers a melee bow with a character-specific implement (our Rambo-style dude used an electric guitar). Red targets are susceptible only to this form of attack, whereas yellow/orange targets are vulnerable to anything. Holding any of the shoulder buttons puts you into a crouch and firing while crouched locks you in position giving you freedom to aim. As with the Clive games, controls feel solid, tight and responsive, with 60fps gameplay locked for all but the biggest mechsplotions – and the odd drop or two had us thinking back to the times in old games when slowdown almost felt impressive – man, this boss is so awesome the game can barely contain it! On the whole it’s an exceptionally smooth experience and the odd drop certainly never affected our enjoyment. 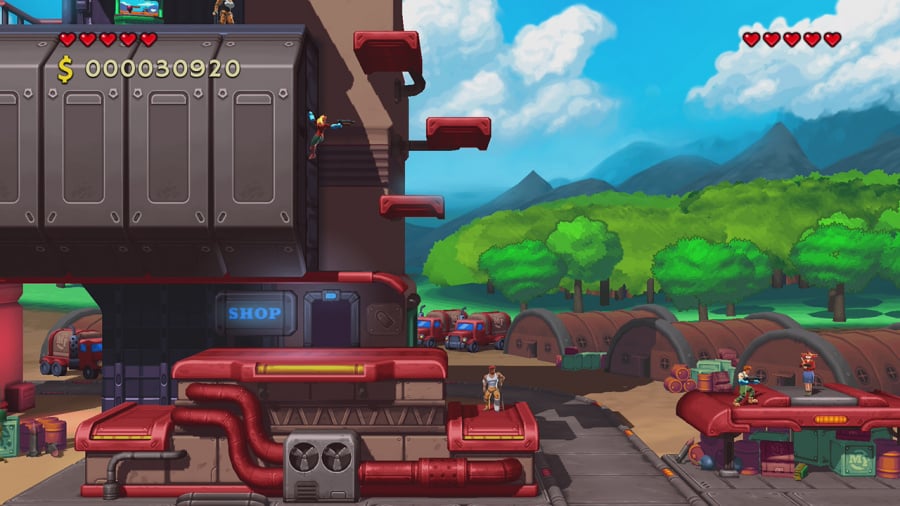 There are fourteen MegaMechs to defeat. The battles themselves are much more interesting than the standard ‘three-hits-and-done’ variety and feature some excellent boss design. Perhaps the most intriguing are the mechs that you journey ‘through’, blasting armour plates from their bodies as you go and navigating to their weak points. Hörberg’s own description of the game as a blend of Contra and Shadow of the Colossus is apt; the game is at its best when it leans towards the latter and you’re clambering up the mechanical bodies.

Destroying the mechs earns you money to be spent with Mr McShopkeep. In addition to the gear which unlocks as you progress – boots that enable you to double jump, for example, or Magnet Gloves for climbing and hanging from metal surfaces, activated when you crouch – new weapons such as the Laser Gun or Spread Gun can be purchased once you’ve saved some cash, enabling you to battle more efficiently and get a better rating. The weapons offer a pleasing range of styles – we particularly enjoyed the bomb launcher and the laser which rebounds off multiple surfaces. Extra hearts are also available to extend your health bar and restarts are quick when you make mistakes. 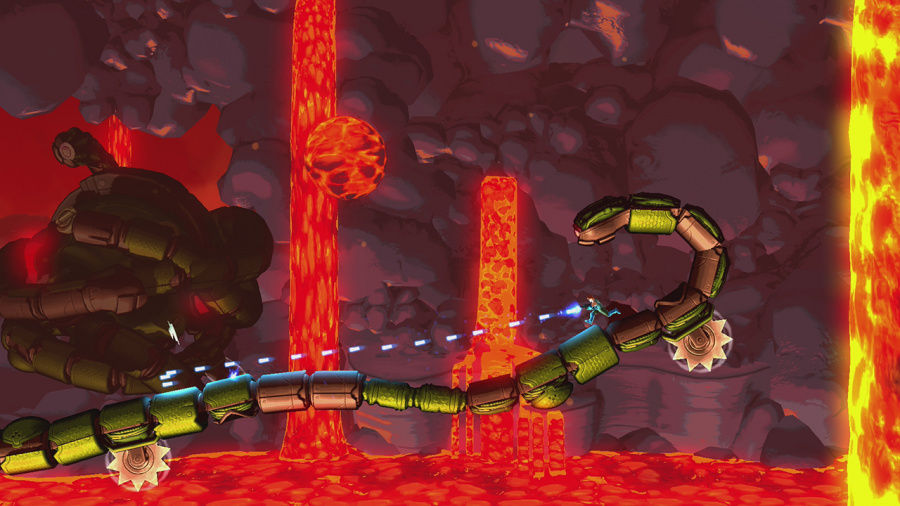 If you’re stuck on one particular mech you can head to an arcade machine at basecamp – the Virtual Training Centre X2 – and replay any of your previous battles for cash. Each one was a rating of up to three stars depending on the speed with which you dispatch your foe. The bosses display a pleasing amount of variety despite the limited premise. ‘Innovative’ is perhaps too generous a word, but the encounters are surprising and satisfying to battle through. It’s far more forgiving than many games in the genre, instead adding challenge through its standard three-star rating system.

Graphically, it’s clean and colourful, if a little ordinary. The visual design of bosses is strong and communicates your objectives well, although when the camera zooms out finding your character on screen can be a challenge, especially after hitting a weak spot and being thrown from the mech. Gunman Clive’s pencil aesthetic gave that shooter a real sense of style that’s lacking here; it’s pleasant, but the ‘competition’ is in a different league.

Once you’ve learned the patterns, taking the mechs down quickly becomes the name of the game. Mechstermination Force isn’t easy per se, but run-and-gun veterans should have no trouble. The game clock said we’d played just under five hours when we got to the final boss, and while there’s incentive to go back and improve your score using the better equipment you’ve unlocked, it’s the stature of the mechs and the scope of the gameplay that makes this ‘bigger’ than Hörberg’s previous games. 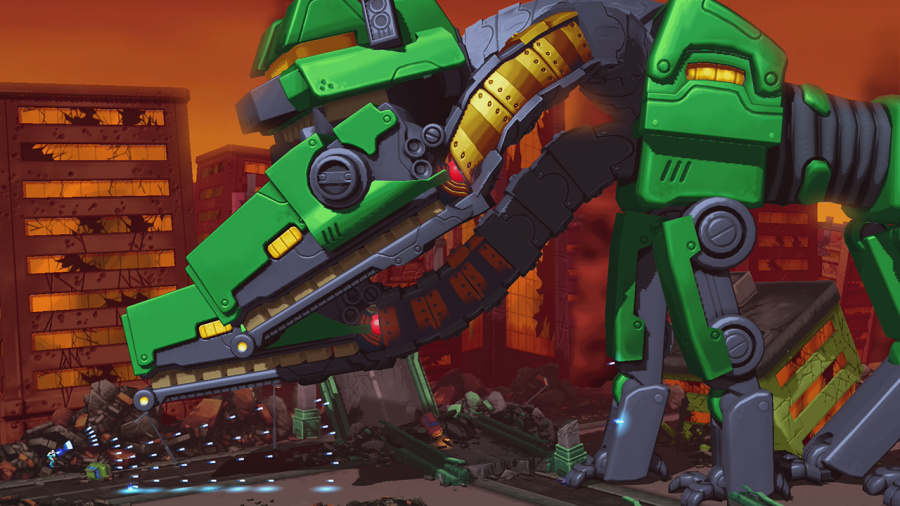 Two-player co-op fleshes out the package and the controls translate nicely to a single Joy-Con. The screen has to zoom out a fair way to accommodate both players and, again, it can be tough to track your mechsterminator, but it’s still solid and very enjoyable to take down the towering automatons with a friend.

With Cuphead just around the corner, we can’t help feeling sorry for Mechstermination Force. It’s certainly less of a head-turner, but it’s a more approachable take on boss rush platforming, with less of an emphasis on twitch-based, pixel-perfect precision. It’s peppered with ingenious design and amusing writing and we thoroughly enjoyed our time with it. We’d recommend it as a more accessible alternative to (or appetiser for) Studio MDHR’s upcoming game. If you enjoyed Gunman Clive, this is a great expansion on the concept and well worth investigating.