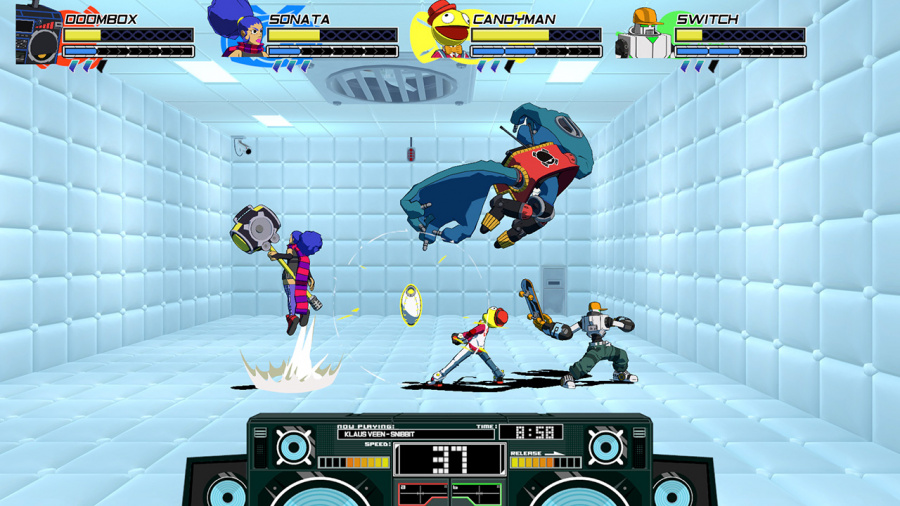 Breaking into the beat ’em up genre is a tough ask for any fledgeling title. With gargantuan franchises such as Mortal Kombat, Street Fighter and Smash Bros. making up a sizeable part of the Switch’s fighting roster, newcomers need to either nail basic fighting gameplay with pinpoint precision or introduce a fresh spin on the genre in order to stand out from the crowd. Thankfully, Lethal League Blaze does more than enough to avoid getting lost in the eShop ether.

Originally released on PC back in 2018, Lethal League Blaze is a continuation of what developer Team Reptile kicked off in 2014 with Lethal League. It’s a bonkers mix of dodgeball and tennis that comes together to form a fresh take on the beat ’em up genre, backed up by a superb soundtrack featuring none other than Hideki Naganuma, famous for his work on the Jet Set Radio series. The aim of the game is to whack an anti-gravity projectile (which, for the sake of simplicity, we’ll refer to as a ball from now on) towards your competitors within a confined arena, chipping away at their health until you’re the last character standing. 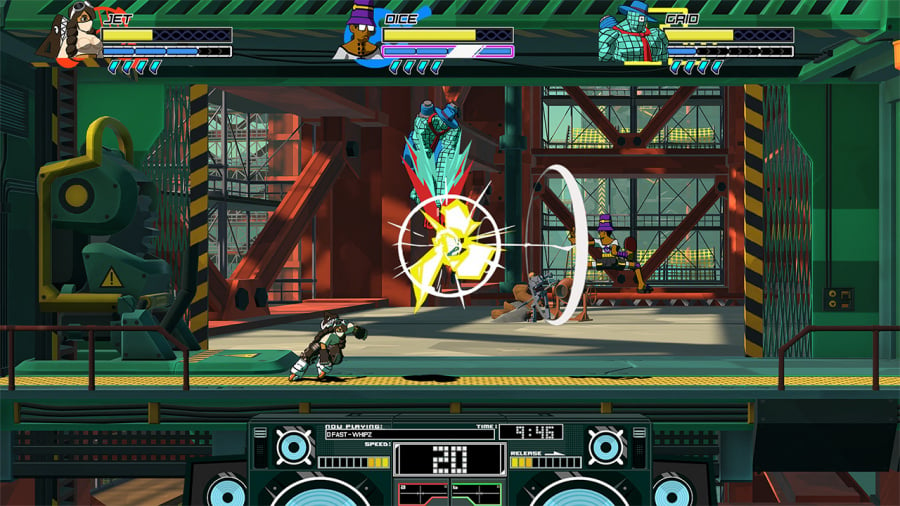 It’s such a simple premise, but Team Reptile has done a remarkable job in crafting the gameplay to make it accessible for newcomers whilst ensuring veterans have plenty of scope to improve and hone their skills. You’ll have a choice of more than 10 characters, each of whom displays truly unique characteristics: Candyman looks like a walking emoji and sports a rather fetching cane, Dice has a love of ping pong and wields a suitably apt paddle, and Latch is a crocodile with a huge tail and stylish headphones. You’ll soon gravitate towards your favourite after a few sessions, but the game remains fair by limiting each character to only one special ability.

All of the characters have the same basic move sets. You can give the ball a good old whack with a press of Y, aiming more or less in any direction with the control stick. If the ball happens to fly around without hitting anybody, you can give it an additional hit (provided you get on the right position) to increase the ball’s velocity – eventually, you’ll have it flying around the stage at impossibly fast speeds, making it incredibly difficult to counter against. Additionally, should your opponents successfully deflect the ball, this will create a volley – much like in tennis – that will increase with speed the longer it goes on. 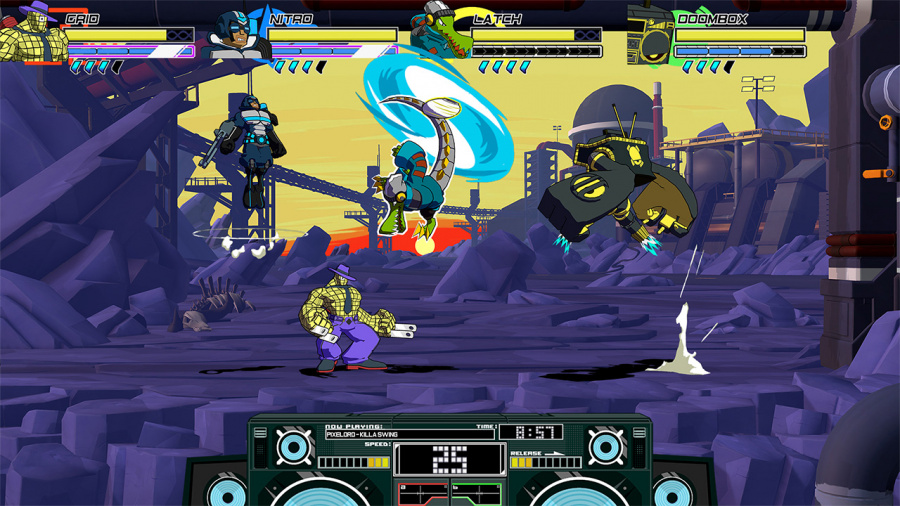 But it’s not all about just hitting a ball back and forth until you successfully deal some damage; there are additional moves you can use to potentially give you an edge. You can bunt the ball with A, stopping it in its tracks to allow you a brief moment to gather yourself and prepare your next move before continuing. You can also grab and throw the ball, giving it an immediate burst of speed, or you can leap up and perform a smash strike, which really helps to increase its velocity quickly. Of course, the faster the ball travels around the screen, the more damage you’ll ultimately deal to your opponent if they fail to defend themselves.

Finally, each character is granted a special ability that you can access by building up a meter from multiple successive hits. These can prove to be extremely helpful if you’re in a bit of a bind, but crucially never feel powerful enough to immediately hand you the match. Mostly, it allows you to manipulate the ball in ways that you otherwise wouldn’t be able to do. For example, Dice can put topspin on the ball to make it curve around and hit your opponent, and Latch can actually gobble up the ball and spit it out at an opportune time (when you’re right in front of your opponent, basically). 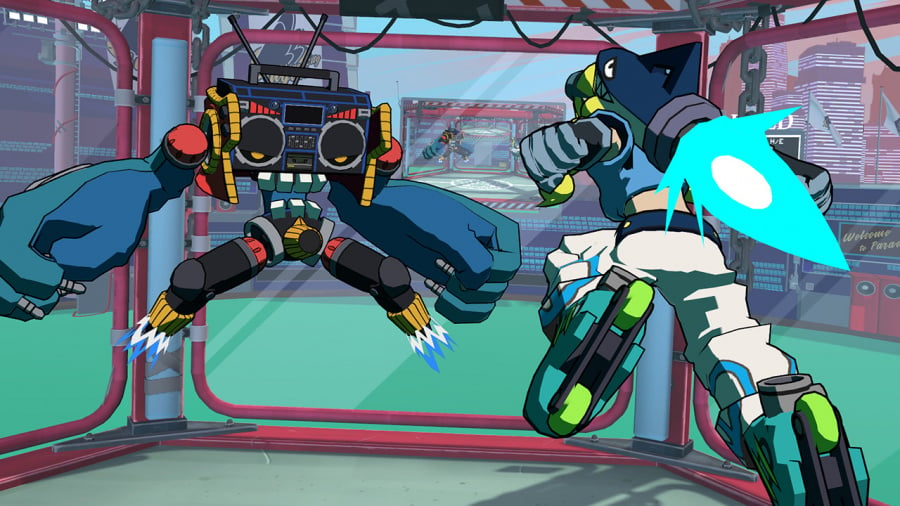 A multiplayer game at heart, Lethal League Blaze can be played by up to four competitors either locally or online. We’re big fans of playing locally, and with it being such a rarity with games these days, it’s really great to see it given some love here. Online matchmaking is currently limited to include only 4 players, so those who prefer good old 1v1 matches will need to wait for a post-launch patch (which we’ve been told will hopefully arrive in August) before this becomes an option.

If multiplayer isn’t your thing, there’s enough here to keep you occupied in single player for a little while. The game’s story mode features numerous fights preceded by a brief, text-based cutscene to set the stage. This isn’t anything special, but it’s nice to see that the unique characters actually have a bit of personality as well. In addition to the normal 1v1 or 4v4 fights, the story mode also throws in a few surprises and flips the rules slightly for some of the matches. For example, you’ll come across a match that requires you to hit a target behind your opponent, and vice versa, rather than aiming for the character directly. In addition to story mode, there’s a classic arcade mode that will pit you against increasingly difficult foes in a 1v1 setup. 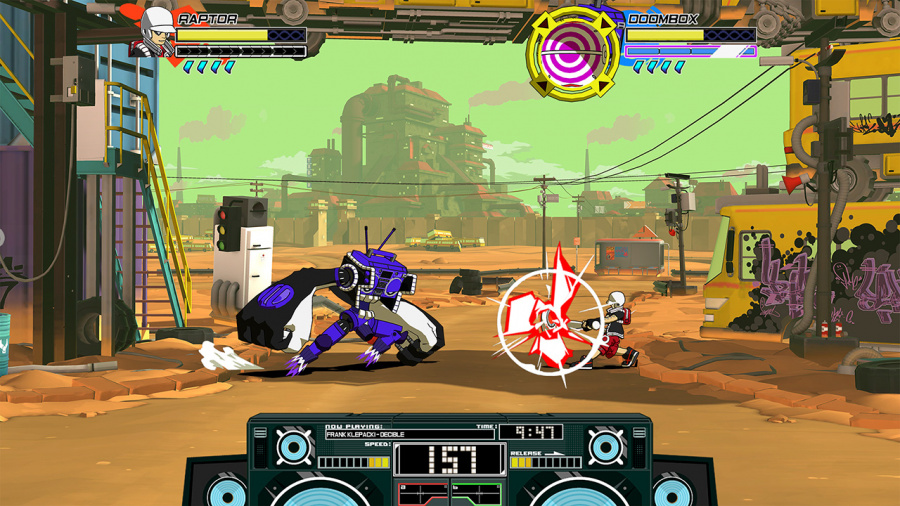 In terms of performance, the game is mostly locked at 30fps at launch. If this sounds a bit disappointing, we’ve been assured that the upcoming post-launch patch will increase the framerate dramatically. That said, we found the performance never falters and remains solid whether you’re playing against one opponent or three, and we suspect that once you get into a few matches, you won’t be particularly fussed about this at all.

If you’re not a fan of multiplayer games, then once you’ve beaten Lethal League Blaze’s story mode and arcade mode, there’s little to entice you back into the fray. Nevertheless, the gameplay itself is remarkably versatile, allowing newcomers to get stuck right in whilst more seasoned players can tinker with the game’s many intricacies. Throw in an amazing soundtrack and some fantastic cel-shaded visuals, and you’ve got a competitive game that’s engaging in terms of both its presentation and its instantly accessible gameplay.