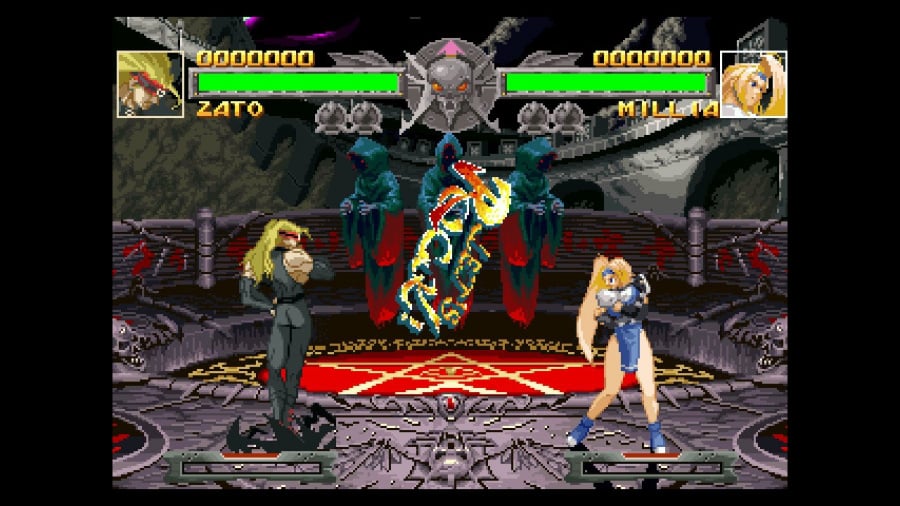 Arc System Works’ Guilty Gear series first chaos-attacked its way onto the gaming scene back in 1998, immediately making a name for itself amidst the more established giants of the fighting game genre with its beautiful hand-drawn roster of twisted manga combatants, hardcore rock soundtrack and insanely fast, combo-based pugilism.

At a time when Tekken 3 had its three-dimensional field of movement, Street Fighter Alpha 3 was adding depth with its various ‘-isms’ and King of Fighters ’98 favoured team-based battles to stand out from the crowd, Guilty Gear arrived with a host of new concepts and a deceptively deep fighting system, establishing a new high standard in ‘easy to learn, hard to master’ fighting games. 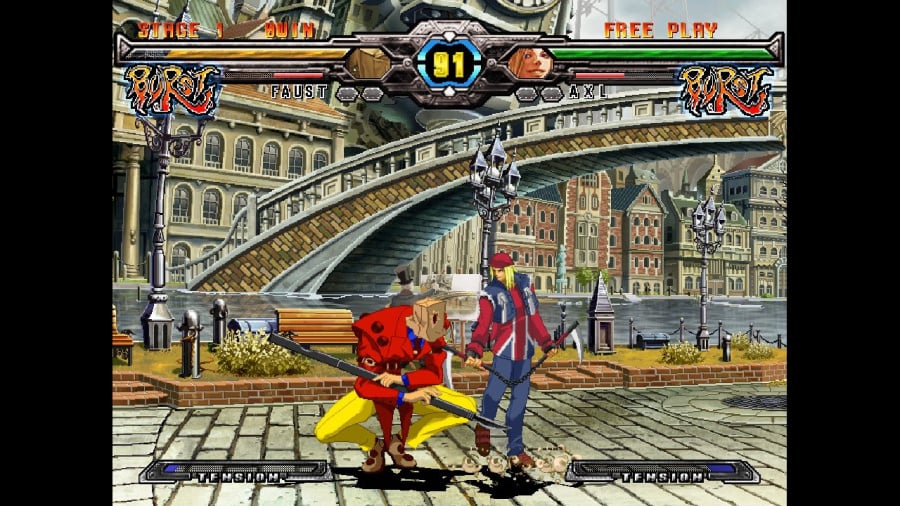 Doing away with the standard three-punch, three-kick system which was prevalent at the time, Guilty Gear favoured a six button setup comprising Punch, Kick, Slash, High slash, Dust and Respect, and – once fighting fans got their head around that – they had Tension Gauges, Overdrive Attacks, Faultless Defences and Instant Kills to get acquainted with. It’s a game that had so much originality and depth from the get-go that, on returning to it as one half of this 20th anniversary collection, it still makes for a fantastically fast and fluid fighter; a fascinating counterpoint to Guilty Gear XX Accent Core Plus R, the other half of this package which is quite possibly the most robust, fully-featured and technical game in the entire series.

What you get in this 20th anniversary edition, then, is the very first step in the franchise; a somewhat barebones package by today’s standards for sure, but the basis for all that followed, sat alongside the culmination of everything that was introduced over the course of the following fifteen years, polished and refined to absolute perfection in XX Accent Core Plus R.

Dipping back into the original Guilty Gear is a wonderful thing and, despite its rather meagre roster of ten fighters and paucity of game modes (all you’ve got here is arcade or versus), there’s still a lot of fun to be had. The hand-drawn sprites, although pixelated by today’s standards, are beautifully detailed, the rock soundtrack still bangs and the likes of Sol Badguy and Ky Kiske – very much the Ryu and Ken of Guilty Gear – alongside Potemkin, Zara, Kliff Undersn and the rest provide plenty of challenge and variety. It’s still a game capable of doling out its share of surprises; arcade mode is tough, even on normal difficulty, and getting caught by or pulling off an Instant Kill move is still as thrilling now as it was back in the day. 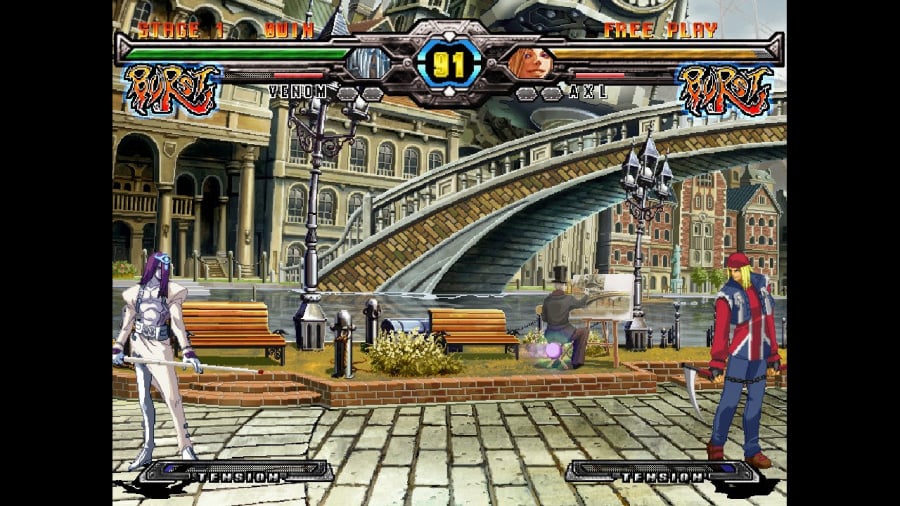 It’s the speed and agility of the combatants and the pace at which a match develops, even back in this first game, that sets Guilty Gear apart from other fighters of the time. Its systems are built entirely around rewarding an offensive mindset; special abilities are linked to your tension gauge which you fill up by constantly moving towards your opponent and attacking, whilst defending and retreating will see it decrease. It’s all about going at your opponent hard to open up more possibilities, chaining together lightning quick combos in order to get that gauge to a point where your character can make use of their various chaos and overdrive abilities. The tension gauge also enables you to perform a Faultless Defence by holding down two buttons as you block in order to nullify any chip damage until your gauge runs out – the only fleeting refuge you’ll find for yourself during a typically hectic Guilty Gear matchup.

Of course, later releases in the series would go on to introduce a plethora of new systems to sit alongside these first offerings in the form of Burst Gauges, Roman Cancels and Dead Angle Attacks, to name a few, but for a first entry – even all these years later – the gameplay in Guilty Gear is deep and fluid. In terms of this port, it’s certainly a straightforward, no-frills offering, but it performs perfectly on Switch, with the Joy-Con doing a more than passable job in portable and docked mode – although, for hardcore players, we would obviously recommend the Pro Controller or a fight stick for complete control. 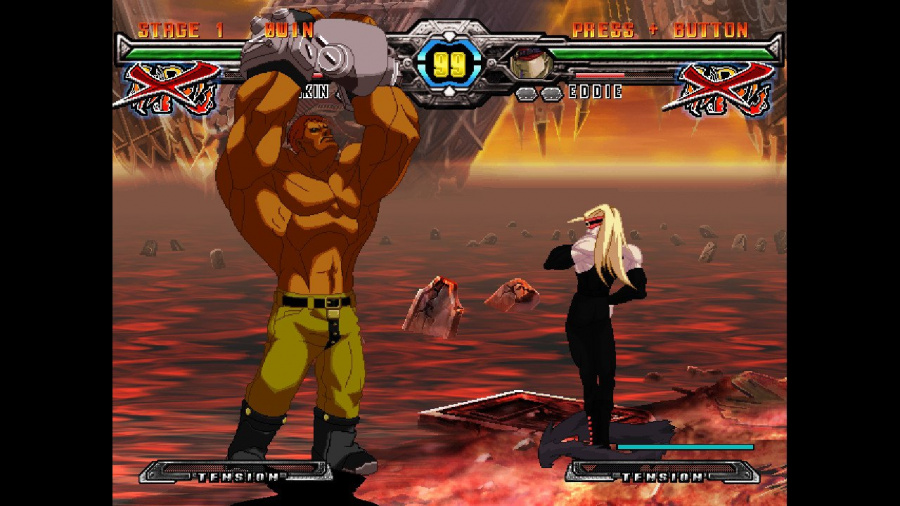 Moving on to the real meat of this 20th anniversary offering, Guilty Gear XX Accent Core Plus R is a monstrously generous package in comparison to its predecessor, with eight modes in total – including the obligatory arcade and versus modes alongside a robust, if somewhat nonsensical Story mode. These are joined by survival, Mission, M.O.M, Training and online versus modes. There’s an absolute ton of single-player content here. The deep fighting systems introduced in the first game have been added to in XX with the introduction of various new mechanics, including the Burst Gauge which fills as you take damage, enabling a Psyche Burst ability which allows the player to break an opponent’s combos and super moves; it also fills your Tension Gauge to max immediately if successfully utilised.

Alongside new mechanics you also get the largest roster of fighters in any Guilty Gear game: twenty-five in total, modified and tweaked to perfection from the original XX release and including fan favourites Justice and Kliff, nerfed and ready for action. This is a game that has remained massively popular among Guilty Gear fans due to that robust roster as well as the fact it contains mechanics that were dropped in order to make way for the more streamlined and beginner-friendly Xrd games which followed.

Graphically, Accent Core Plus R has stood the test of time well; it’s obviously a much more detailed and beautiful game than its predecessor with Sol, Ky, Millia and company all looking particularly gorgeous this time around and, paired with the absolutely bonkers soundtrack, it’s still the ferocious assault on the senses it was back in 2013. This port also contains not just the original heavy rock soundtrack but also the Korean version of the OST composed by Shin Hae Chul, something fans have been after for ages; you can also head into the options menu to switch between the Accent Core Plus R and Accent Core versions of the game to see just how the incremental updates added over the years actually affected gameplay. 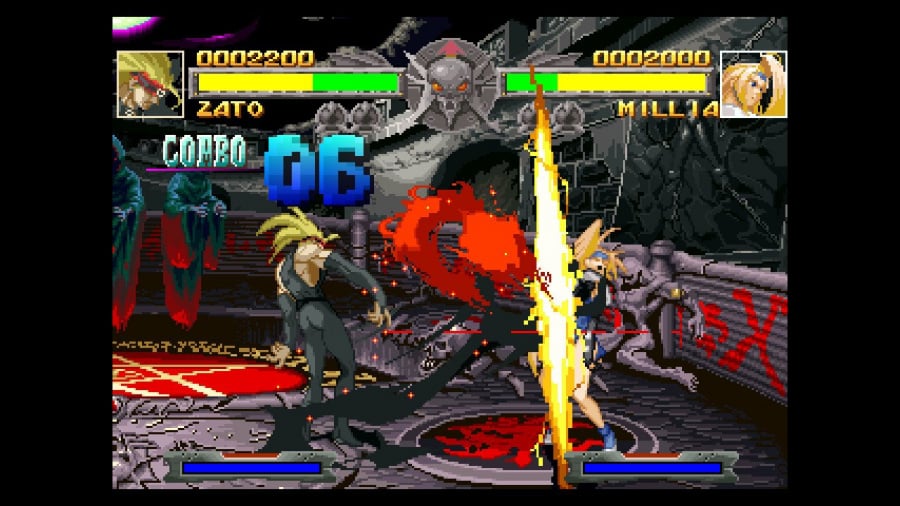 Performance-wise on Switch, XX Accent Core Plus R runs flawlessly during combat; again, it’s a straightforward port of a relatively old title, so that’s no surprise. This is a game which is still rightly considered one of the greatest fighters of all time and it’s easily right up there with the very best of the genre the Switch has to offer. It’s got a bundle of single-player content to make your way through, the additions to the original mechanics add a frightening amount of depth and, although you can have a great time just jumping in and learning the basics – pulling off Gatling combos and screen-filling chaos attacks – it’s the layers upon layers of systems to get to grips with that have made this a perennial favourite among hardcore Guilty Gear fans. Every character of the twenty-five on offer here is totally unique; it’s one of the strongest rosters in the fighting game genre, with straightforward characters such as Ky and Sol mixing it up with difficult-to-master entries like Chipp, Zato and Dizzy.

With all that having been said, it’s somewhat of a shame to have to report that during our time with the game its online mode performed poorly. Whether choosing ranked or unranked matches or attempting to join or create a room, it was very hard to find a match against another opponent, and the few we managed were laggy to the point of being pretty much unplayable. It’s a situation we hope will get sorted over the coming weeks and months, but for now, the online portion of the game is a bit of a mess. It’s still a robust package in terms of single-player content, but the fact that online play is all over the place is definitely a big disappointment. 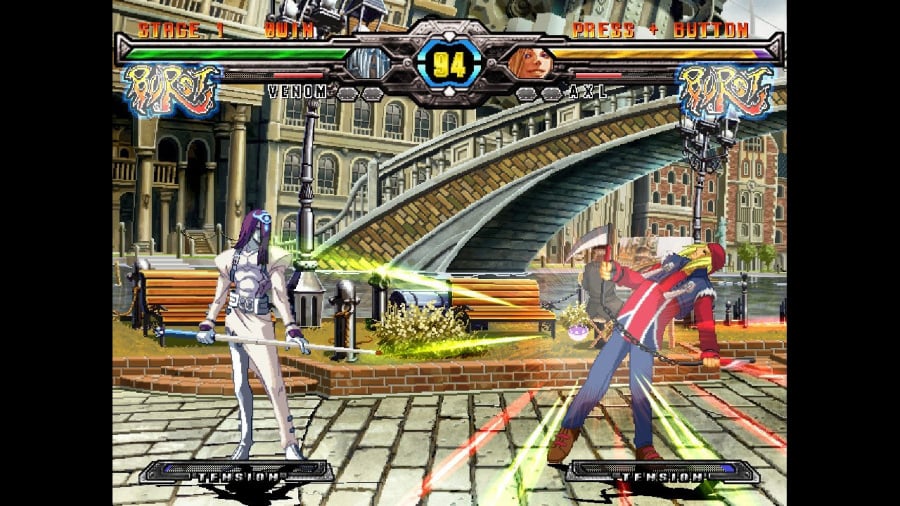 It’s also worth noting that this 20th anniversary edition is being offered as a physical purchase including both games, but they can also be bought separately on the eShop, and perhaps it’s here you’ll find the best value if you’re not particularly interested in revisiting the first game in the series and want to jump into the more robust offering of XX Accent Core Plus R.

Guilty Gear 20th Anniversary Edition is a fantastic addition to the Switch’s roster of fighting games and sits right up there with the very best examples of the genre the platform has to offer, mostly due to the fact that XX Accent Core Plus R is just about the strongest, most technically refined entry in the series. The original game is showing its age, but it’s still an absolute blast and together these two games provide fight fans with a neat look at how the 2D era of Guilty Gear developed from inception to its most polished and refined point. It’s a disappointment that the online mode in XX Accent Core Plus R isn’t performing as it should be right now as there’s no escaping the fact that online is a major aspect of this type of game; it definitely sullies what is otherwise an absolutely essential purchase, but there’s still more than enough single-player content here to make this collection highly recommended.

GAME PS5 stock has become available today, with standalone PlayStation 5 Disc and Digital consoles available to buy as well as a wide selection of bundles. [...]