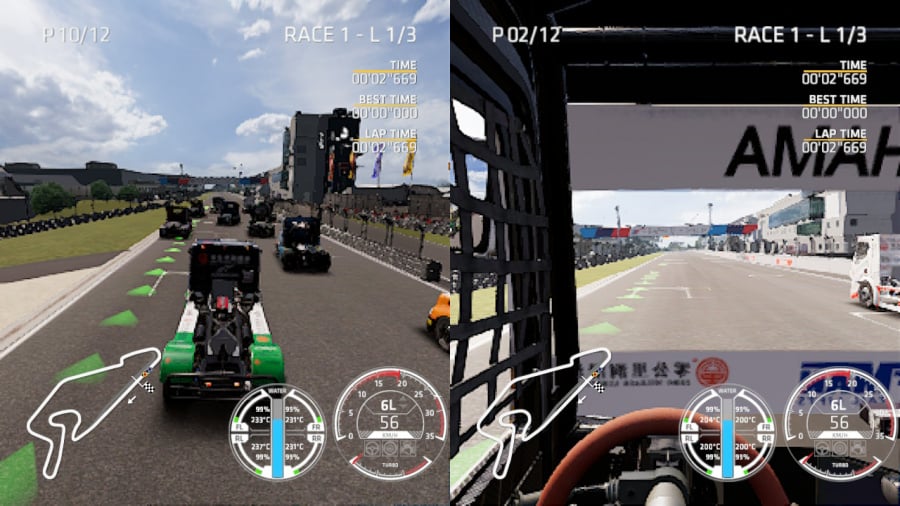 It stands to reason that if you weld four wheels and an engine onto something, there’s probably bound to be someone who wants to race said thing around a track like a maniac. Because that’s the only reason we can imagine why there’s a real-life professional racing league for big rigs and trucks. It’s clearly a big deal for many motorsport fans around the world, because the European Truck Racing Championship now has its own official game, featuring plenty of famous race tracks (including Nürburgring and the Fuji Speedway) and a total of 45 official trucks to choose from across its two classes.

FIA European Truck Racing Championship is another semi-realistic racing experience from publisher BigBen Interactive, following in the footsteps of TT Isle of Man and V-Rally 4. If you’ve played either of the above, or any of Milestone’s recent offerings, you’ll at least have some idea of what to expect from this double-A racer. In terms of the driving model, the handling is more in line with a clunky arcade racer, with only a moderate amount of adjustment needed to correct oversteer or understeer. The AI isn’t particularly clever or aggressive either, so you’re only ever going to lose a race because you spun out after another truck tapped the back end of your cab. 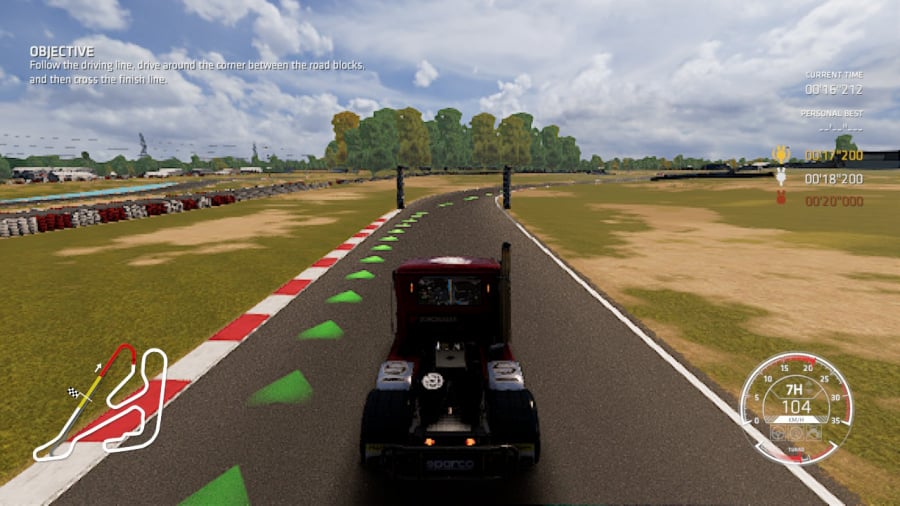 The only real ‘simulation’ part of the game comes in brake management. Five ton rigs take a while to build up speed, but when they get going it takes a fair amount of power to slow them down, so that means putting some real pressure on your brake pads. For ‘FIAETRC’, that comes in the form of a brake cooling system that you’ll need to monitor throughout a race. There are two types of trucks on offer – the larger rigs used for the official ETRC tournament and smaller variants used for the World Series – and each one has its own temperature threshold and durability. The World Series trucks are heavier, but have higher top speeds, while the ETRC versions are nimbler but far more tetchy on corners. As unwieldy as the driving model can be, you can really appreciate the contrast between the two and you soon learn to race them differently.

You have a limited reserve of water for each race, and when your brakes become too hot after reducing your speed (represented by a circular meter surrounding the water gauge) you’ll need to spray them with water to reduce their temperature. Let them heat up too much and your brake pads will begin to deteriorate, which will reduce their performance and make taking bends and chicanes a nightmare. Inject too much and the pads will grow cold, making them too stiff to accurately gauge your stopping distance. It introduces a resource management aspect usually only found in F1 games, where you’re having to actively track a variable figure while traversing a course and competing with other drivers. 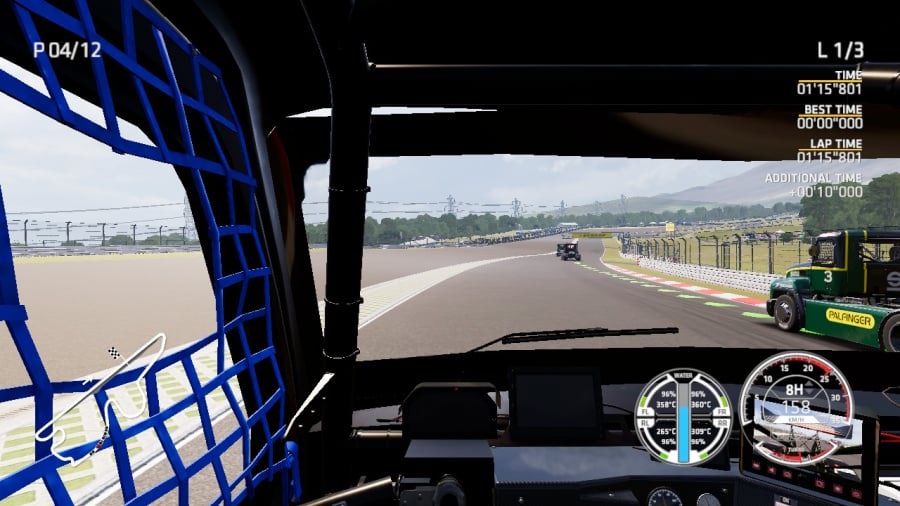 On Switch, the small temperature numbers can be very difficult to see in handheld mode, which makes taking your eyes off the track for a moment at a time even more tricky. It’s not so much of an issue when playing in docked mode, but it does make playing the game in a portable setting less enjoyable. If you’re new to racers in general, you can toggle the brake cooling mechanics off, and simply focus on controlling a giant truck as it careens around a corner on rain-covered track.

There’s your usual modes to play through, including a Career mode (complete with a race calendar and tournaments for both European and worldwide locations), as well as Quick Race and Time Trial options. The Career mode is quite basic, but there are some rewarding subsystems at play, including the need to earn credits to pay your team once you’re under contract, as well as the importance of repairing your truck in between races. You can race locally in splitscreen with five different multiplayer modes. In terms of content, it’s a pretty unremarkable package and one that’s only likely to appeal to truck racing enthusiasts and super hardcore racing fans who are interesting in besting another form of virtual motorsport. 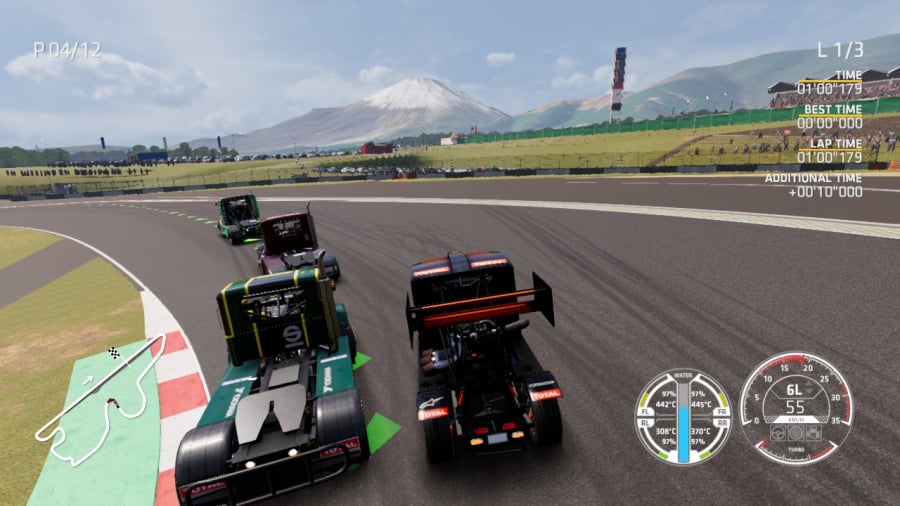 The real issues come in FIAETRC’s performance issues on Switch, especially when playing in handheld mode. When playing in a portable scenario, the framerate only ever levels out when you’re moving at a slow speed on a track without any other trucks around you. Should you try to gain momentum or share the screen with your fellow competitors, the framerate plummets. Considering this is, first and foremost, a game about competitive driving, it’s a considerable issue. Most assets, from vehicles to track paraphernalia, suffer considerable jagged edges and it’s often awash with screen tearing. It runs noticeably smoother in docked mode, with a more stable frame rate, but it’s not a good sign when handheld mode – the main selling point of the Switch version – runs so poorly.

FIA European Truck Racing Championship does offer an officially-licensed way to race some of the biggest motorsport vehicles around, and with its unique brake cooling system, there’s a really rewarding balance between traditional racing tactics and resource management. However, the problems with performance on Switch – both in the framerate and the poor optimisation of trucks and track assets in handheld mode – really cause an already unwieldy racing experience to veer off the track. It’s not without positives, but there are far better options for race fans on Switch right now, and far better examples of multiplatform optimisation.