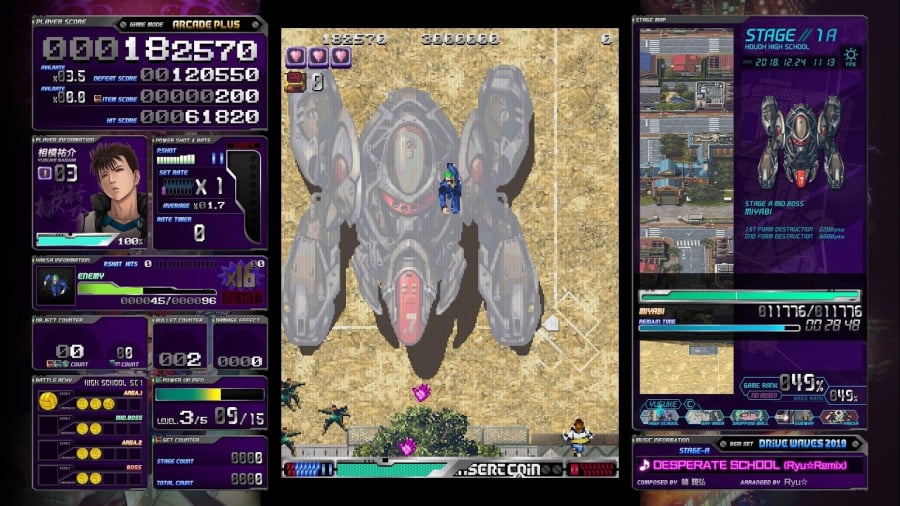 Before we begin our review of ESP Ra.De. Psi, M2 ShotTriggers’ latest triumph, here’s a little history for those who may not be intimately familiar with ESP Ra.De. and its place within the pantheon of shooting games. In 1998, the blossoming shmup developing studio, CAVE, just finished delighting and devastating the world with their ‘danmaku’ masterpiece, Dodonpachi – a game that, to this day, consumes the minds and emotions of any shmup player who dares to challenge it. Before Dodonpachi, CAVE also released the innovative Donpachi, the first shmup to utilize the famous combo-based chaining system that has become a popular staple of contemporary shooters. Both of these games are in the classic style of military-oriented fighter planes taking on waves of other sci-fi combat vehicles. However, with the creation of ESP Ra.De., CAVE deviated from this aesthetic in pursuit of a new idea that was unique for the time — flying human beings blasting their enemies with psychic lasers. 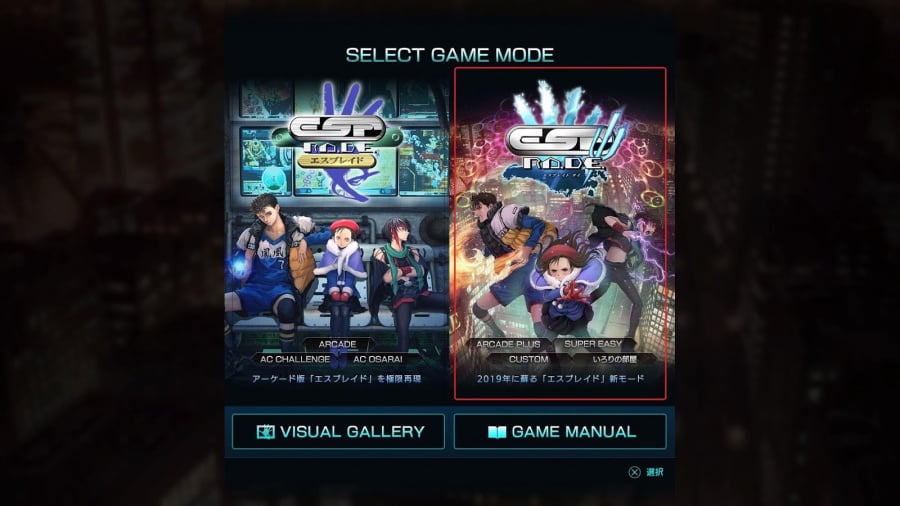 Looking at the visual style of ESP Ra.De. and comparing it to some of the popular anime of the time, especially Akira (1988) and Ghost in the Shell (1995), it’s easy to see where this new design is likely rooted. In fact, for fans of Ghost in the Shell, ESP Ra.De. contains a fun Easter egg in the form of a mid-boss that bears an amazingly coincidental resemblance to the cloaking tank unit that the Major battles at the end of the film.

Visuals aside, ESP Ra.De. is also a departure from Dodonpachi in terms of gameplay and scoring mechanics. Moving away from the strict chaining and maximum bonus system of Dodonpachi, ESP Ra.De. replaces chain combos by having the player attack larger enemies with a special shot and then mugging score items out of the smaller enemies with a regular shot for extra points. It’s a refreshing reversal of design. When written out in detail, the scoring system of ESP Ra.De. does seem confusing, but the basic idea can be summarized as follows: hit the larger enemies with your fully charged special shot, while the “bubbles” of the special shot stick to the larger enemy, quickly fly around and kill the smaller ones with your regular shot to collect higher value score items. Of course, as with any CAVE shooter, there are a bunch of additional strategies to maximize scoring potential, but this basic idea will carry the player quite a long way. 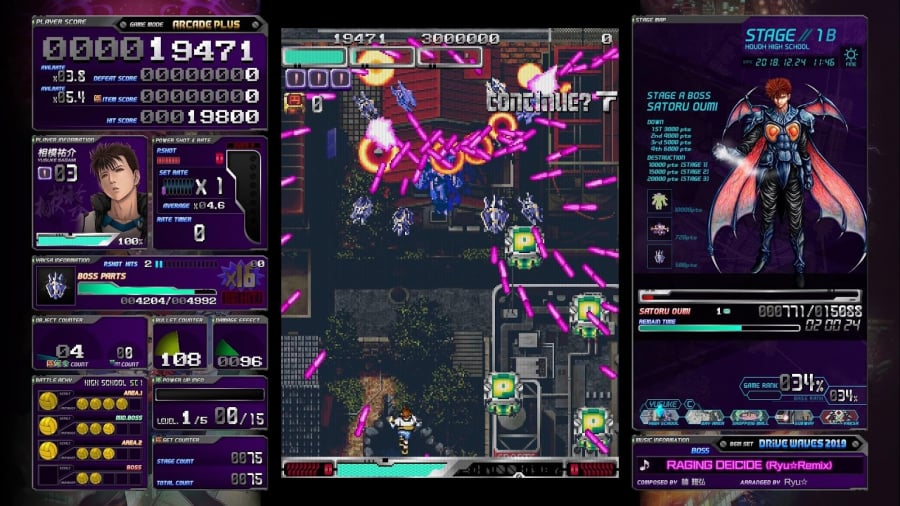 However, as refreshing and fun as the original scoring system of ESP Ra.De. has been for many players, there is one aspect of the original arcade release that we are very happy to see addressed in this new Switch port. This concern is the excessive boss milking of the arcade release. Boss milking, for the uninitiated, is when a player delays killing a boss by destroying regenerating or extra pieces for added points. In many shmups, like Ketsui, boss milking is a fun and interesting mechanic that presents the player with an enticing risk-reward scenario. The player takes the risk of fighting the boss longer for the reward of more points (and shmup players love points). In the case of ESP Ra.De., though, this risk-reward is thrown out of balance to the point where the boss milking is extremely rewarding, points-wise, but involves the player committing to very long stretches of tedious repetitive gameplay. Stack this up with the time commitment of playing for score in the first place, and the result is a game that very few players have the patience to play for score on a serious level.

Enter M2 ShotTriggers — the team that needs no introduction to the shmup world, but could benefit from an intro to the wider gaming public. The ShotTriggers team is a small group within the Japanese development powerhouse, M2 – the studio behind many acclaimed ports that have been released on modern consoles, like the Collection of Mana and Castlevania Anniversary Collection. They are highly respected among this field of video game creation. The ShotTriggers sub-team specialises specifically in shmup arcade-to-console ports. What’s extremely important to understand about ShotTriggers is that, compared to other teams porting shmups to modern consoles, these guys are as hardcore and passionate about the genre as any player could hope for. The ShotTriggers team talks to the super-players and studies the games in-depth and delivers comprehensive features that you will not find anywhere else – even in the world of unofficial emulation. 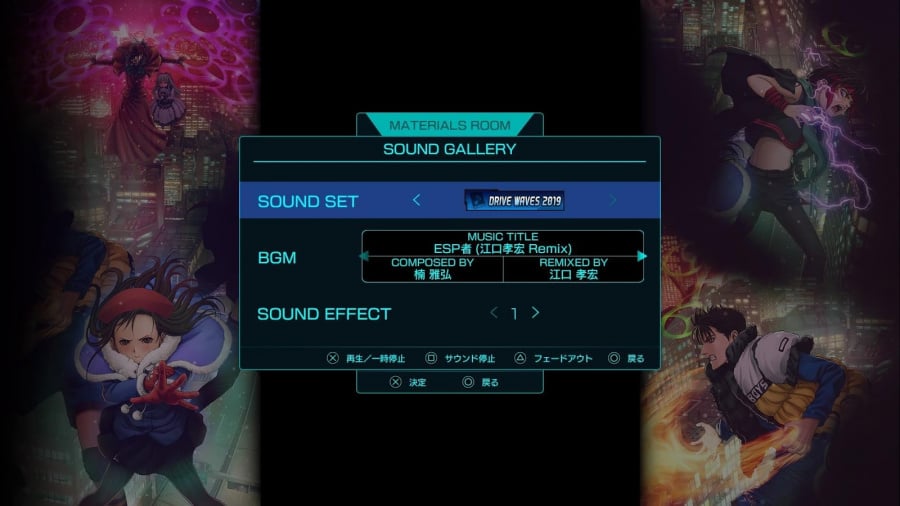 As much fun as it is to have an official port of a classic game, like Metal Slug, on your home console, the world of unofficial emulation is delivering these games in an outrageously strong form — especially for dedicated players. Not only are players given the mighty save-state feature to efficiently and quickly hone in their practice of difficult or important sections, but they are typically playing these games with lower input lag as well. Just take a look at the absurd amount of input lag and complete lack of training features in the ZeroDiv Psikyo ports as an example (Strikers 1945 II has a whopping 7 frames of lag). Many of these ports are simply ROMs being dumped with user interface elements added and no consideration for playability in the long term.

M2 is never happy with this approach. With ESP Ra.De. Psi – as with Ketsui DeathTiny and Battle Garegga Revision 2016 – the ShotTriggers team set out to make a port that even unofficial emulation cannot match. They accomplished this impressive achievement through the addition of the following elements. ESP Ra.De. Psi now has an Arcade Plus mode that tones down the boss milking issue of the arcade release, making it more attractive to play for score. Accompanying this mode is the addition of a new character, Alice Master, a green-haired girl in a white gothic dress who obliterates her enemies with energy bursting from her favourite doll (very fleek, we must say). M2 also added a comprehensive save-state functionality to their port, so players can spend the hours they need to practice for things like the final boss fight without having to waste time credit-feeding to the last stage over and over. 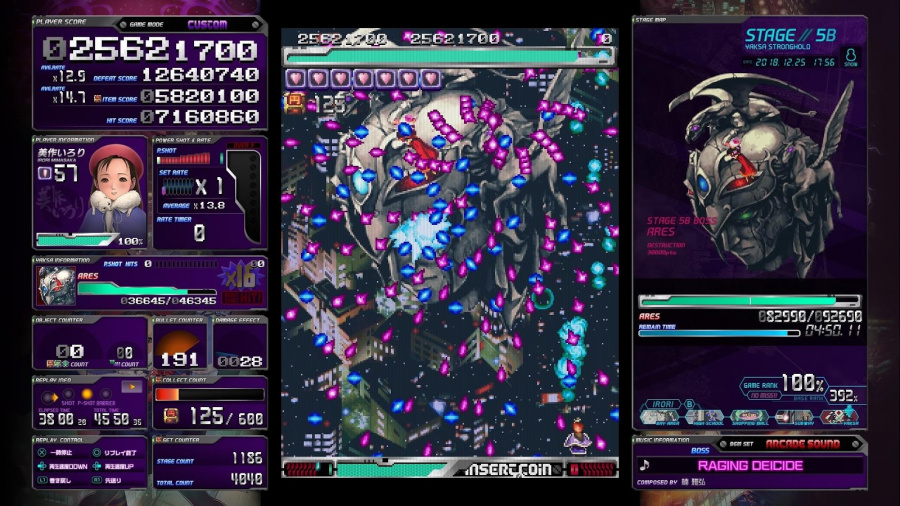 The user interface of ESP Ra.De. Psi is well-formulated, also. There are comprehensive control features like being able to set the autofire rate on different buttons and fully implemented screen rotation and scanline options. We recommend the 25% darkness level, but the lines can go as dark as 100% if desired. Of course, no arcade shmup port is complete without rotation support and, as hoped, Psi can be played both horizontally (YOKO) as well as vertically (TATE). It wouldn’t be a Nintendo Switch shmup review without mentioning the ability to use the Flip-Grip in handheld mode, which is a cool option. However, one thing to keep in mind is that, if you plan on using the Hori D-pad Joy-Con — which is absolutely superior to the stock Joy-Con D-pad, even with a case mod — you are going to be out of luck because, unfortunately, Hori did not add wireless functionality to it.

Outside of the core gameplay, M2 has also included some extra modes that enrich the experience beyond what you’re going to find in the usual shmup-to-console conversion. ESP Ra.De. Psi has a fleshed-out replay and online leaderboard system. In this system, you are not only able to post and record your own replays of the different game modes, but you are also able to download other players’ replays to study and observe. This is a powerful feature when it comes to planning your routing because you can slow down and speed up the gameplay at your leisure for careful analysis. Also present is the Arcade Challenge mode, where you can play different slices of the game in bite-sized chunks of increasing difficulty. This is an accessible way to learn ESP Ra.De. Psi and get some guidance from the developers on how to improve. It’s essentially a shmup training mode. 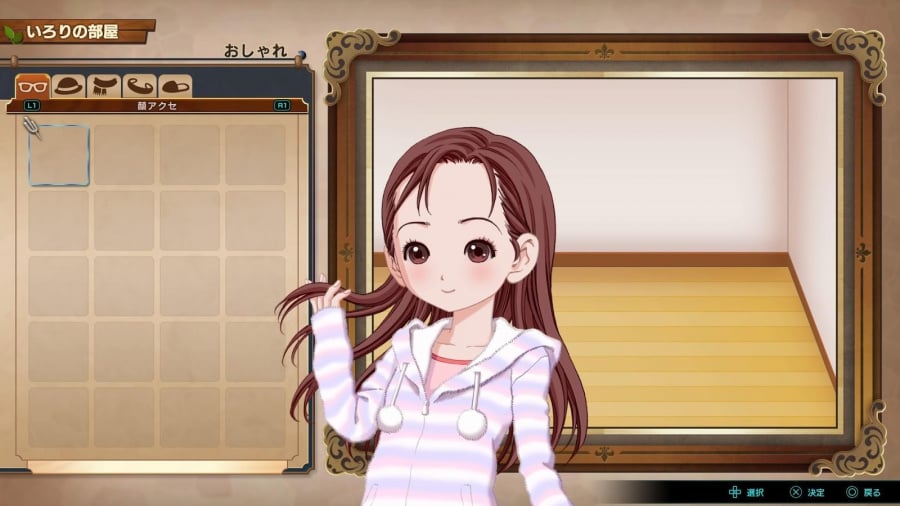 While playing Arcade Challenge, you will then unlock in-game currency that you can spend in a rather interesting additional mode called Iori’s Room. In this mode, the game switches over to a Gacha-style setup where you can decorate your character’s room and coordinate their outfits. It’s not going to be a mode that’s highly appealing to most players, but it is a nice addition for the fans who are interested in learning the game via Arcade Challenge and would like an extra incentive for their time and effort. Sadly, the whole thing is in Japanese so it’s going to be troublesome to navigate for non-Japanese speaking players. This mode is likely aimed at the Japanese mobile crowd who enjoy Gacha games, and if it sells more copies of ESP Ra.De., then it’s no bad thing – even if western players might not be able to fully enjoy it (let’s hope that a release outside of Japan happens).

Before getting to the review score and final summary, some missed opportunities can be pointed out. However, what’s also important to keep in mind is that, because the ShotTriggers team is so far ahead of the competition, the only basis of critique is in comparison to their previous work. In the case of ESP Ra.De. Psi then, we were disappointed to see that the game does not have a true arrange mode, like Battle Garegga Revision 2016 or Ketsui DeathTiny. Arcade Plus mode, with the addition of Alice, is in the ballpark, but since Arcade Plus is more akin to a revision rather than an arrange, there is a sense of letdown in that regard. Also, in terms of the game’s soundtrack, we were sad to note that there is only the one extra option, whereas Ketsui DeathTiny and Battle Garegga both had multiple additional soundtracks. With that said though, it is a relief that the new ESP Ra.De. soundtrack is very strong, so there is still extra value with the new music. Perhaps, in the future, M2 might be interested in adding DLC for the game in the form of an arrange mode and extra OST – but until then, there is that slight disappointment in comparison to Ketsui DeathTiny.

ESP Ra.De. Psi goes beyond the industry standard and lays waste to pretty much every other shmup on the Nintendo Switch – this is even better than the mighty Ikaruga, which many Switch fans see as the best example of the genre available on the system. While personal preference obviously enters into things, we feel that ESP Ra.De. Psi is the superior port thanks to all the comprehensive features and attention to detail. Plus, with Arcade Plus mode removing the previous frustrations of the troublesome boss milking scoring system, ESP Ra.De. Psi cleans up to be a massively underrated classic that effortlessly earns the title of the best shmup on the Nintendo Switch. Hopefully, this superb package will see a western release in the fullness of time so an even wider audience can sample its myriad delights.

PS5 reveal event has officially been confirmed today, with Sony next week holding a PlayStation 5 st

PS5 vs Xbox Series X: Thousands of reasons why Sony could be in BIG trouble

Coffee Talk Review – A Caffeine High And A Crash