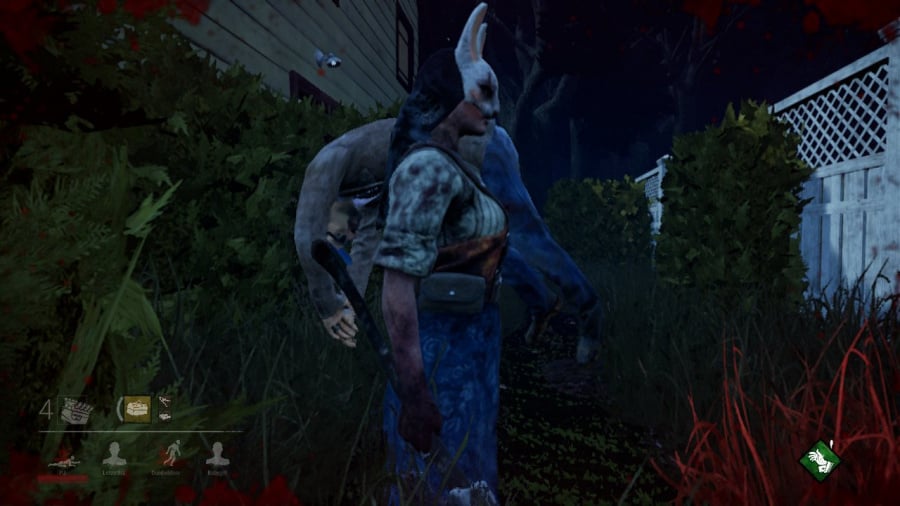 Dead By Daylight is an asymmetrical, online-only survival horror game that has been pitting teams of survivors against crazed killers since 2016. The story sees innocent bystanders pulled into the world of the Entity, a supernatural being awakened from its slumber by the horrific actions of the cast of killers you get to play as here. Summoning them to its world, the entity charges these monsters with offering up human sacrifices in order to appease it. Players jump into a match as one of up to four survivors and attempt to escape the clutches of a single player-controlled killer by repairing a bunch of very noisy generators in order to open a great big door that lets them high-tail it out of the semi-randomly generated arena to victory and – we expect – some pretty heavy therapy.

Survivor characters, of which there are eleven included here (we’ll discuss DLC in a bit), all come with various traits that enable them to play slightly differently. Ace Visconti, for example, improves the general luck of the survivor team, whilst Feng Mi can hone in on the killer’s location more easily than others and is better at repairing generators. These traits can be augmented with perks and items; each survivor is able to equip one item and up to four perks as they level up and gain experience. Items include such things as healing kits to increase the speed at which you recover health and toolboxes which speed up the time it takes you to fix up a generator. You can also make offerings to the Entity which grant boons, such as the ability to gain more Bloodpoints, the game’s version of XP, which you feed into a randomly generated Bloodweb of upgrades and perks for each character. 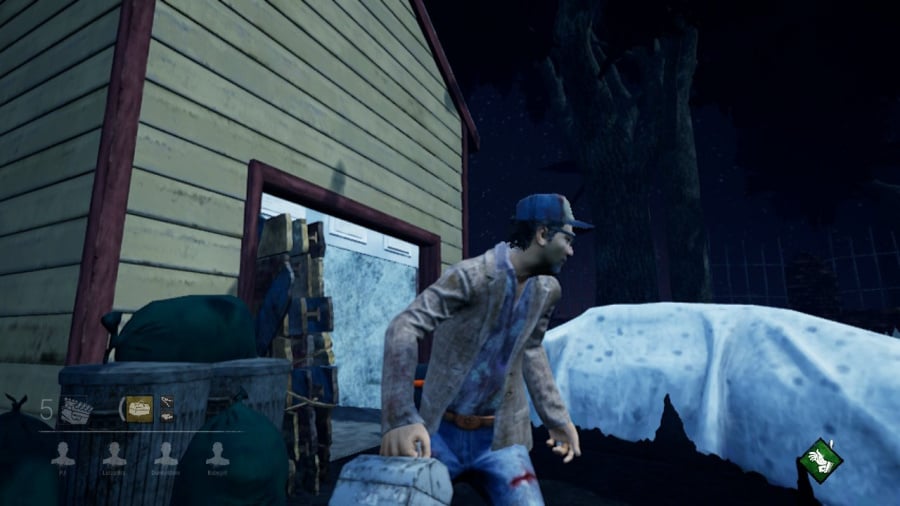 Each killer you choose to play as – and there are nine included here – also has their own unique power with which to terrify survivors as you hunt them from one corner of a map to another. The Trapper can, perhaps unsurprisingly, throw down bear traps to snag survivors as they flee. The Hag can teleport around the map through portals she lays down, and the Clown sprays plumes of noxious gas that impair vision and movement temporarily, enabling him to move in for the kill. Killers also have perks which help them sniff out the survivors in a variety of ways, alerting them to a generator that’s almost fixed or heightening their senses temporarily to movement and noise.

Mechanically, matches take place pretty much the same way each round. As a survivor, you try to repair generators on a map without being spotted. As you make your repairs, a timed mini-game will pop up randomly which, if you fail it, makes the generator you’re working at backfire loudly, alerting the killer and leaving you to sweatily decide whether to press on with your maintenance or run and hide. There’s also a hidden escape hatch which opens when only one survivor remains as an alternative means of getting out of Dodge, but this can also be opened by finding a key whilst more than one survivor is still breathing. 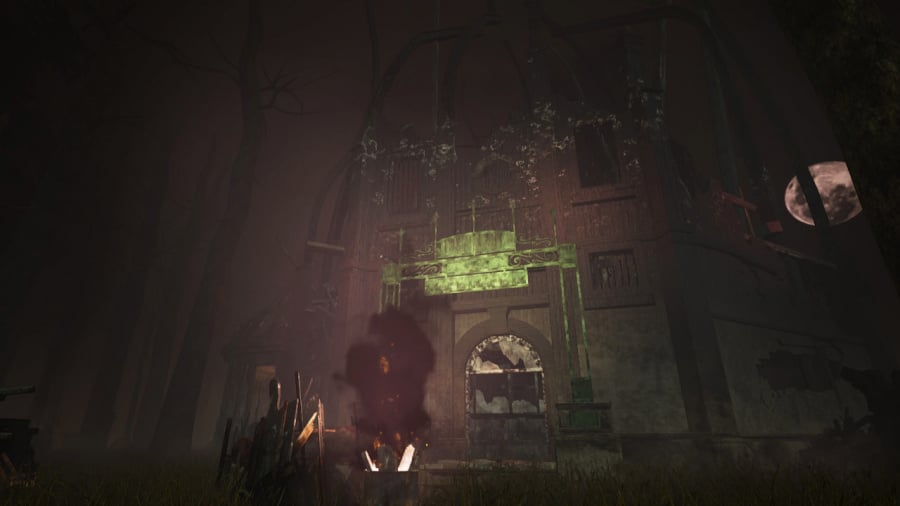 The killer, once they’ve struck down a survivor, needs to take their prey to one of several hooks scattered around a level, hang them up and ensure they don’t escape in order to make a successful offering to the Entity. Of course, killer hooks can be sabotaged, players can struggle to escape or help each other off hooks, heal each other up and – depending on the team you’re randomly thrown in with – games can consequently turn into quite satisfying teamwork-based affairs.

Survivors can vault through windows, pull down obstacles and stun the killer temporarily with a flashlight as a means of defence, but they can’t physically attack, making each and every close encounter pretty terrifying stuff. Killers can all move more quickly than survivors and they certainly have the upper hand in each round, but they are hindered by a slower vaulting speed and a first-person viewpoint that sees them unable to ascertain as much of their surroundings as survivors, who see things from a third-person point of view. All these little gameplay wrinkles add up to a game that sometimes manages – despite its rather straightforward and repetitive nature – to create a pretty tense scenario that can be fun when you get a good bunch of people in a game, and as such, this is definitely a title that comes into its own with friends in a custom match. 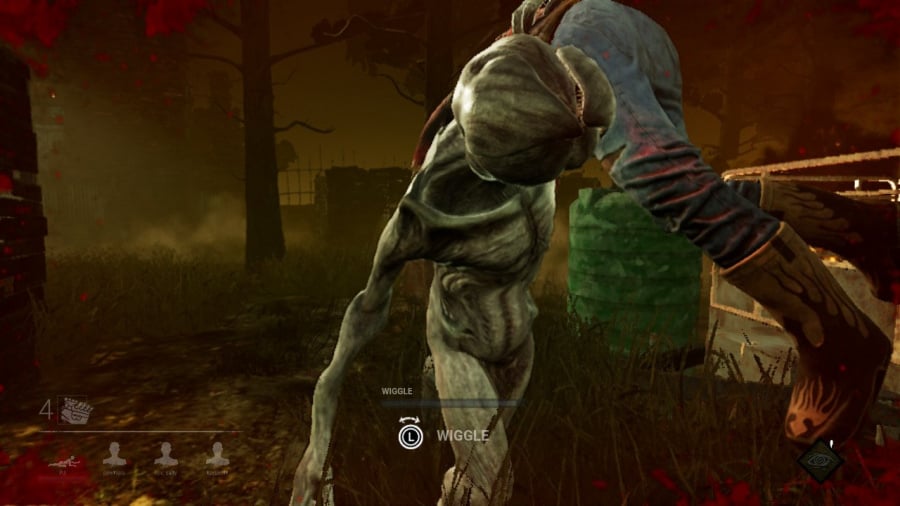 Of course, as this is an online-only game, you’ll often find yourself in matches with survivors who don’t work together – which is fine, but you’ll also often find yourself stuck with people who don’t have a clue what’s going on (including those playing the killer) and this is when things can break down pretty quickly. This problem is exacerbated by then having to wait to get into a new round every time, especially if you’re intent on playing as a killer, where games are a little harder to find. There’s very often quite a lot of downtime, perhaps something that’s not overly suited to a quick portable session. This is also a game that by its very nature will live or die entirely depending on how well-populated its servers are on Switch; there’s nothing to fall back on here, no bots or local multiplayer. It’s all or nothing with regards to online being a success.

Controls can be a little clunky, as they are in all other versions of the game, and the constantly-timed minigames for generators, healing or sabotaging can really begin to grate. In reality, there’s not all that much going on in a round of Dead By Daylight and, as much as it can be fun, we’re just not sure how long it takes before all tension wears off as you grow overly accustomed to it all.

In terms of this port, Dead By Daylight arrives on Switch in a bit of a muted state. It’s never been the most attractive game in the world, but the graphics have taken a pretty big hit here; textures are blurred and muddy and often take a while to load in, character models look terrible and overall it’s not going to be winning a beauty pageant anytime soon. Menus also feel janky, with quite a lot of input lag as you flick through them, which can be especially annoying for newcomers who’ll spend quite a bit of time reading through pages of rules to begin with. There are brief tutorials to play through, but they leave out quite a lot of the finer details. 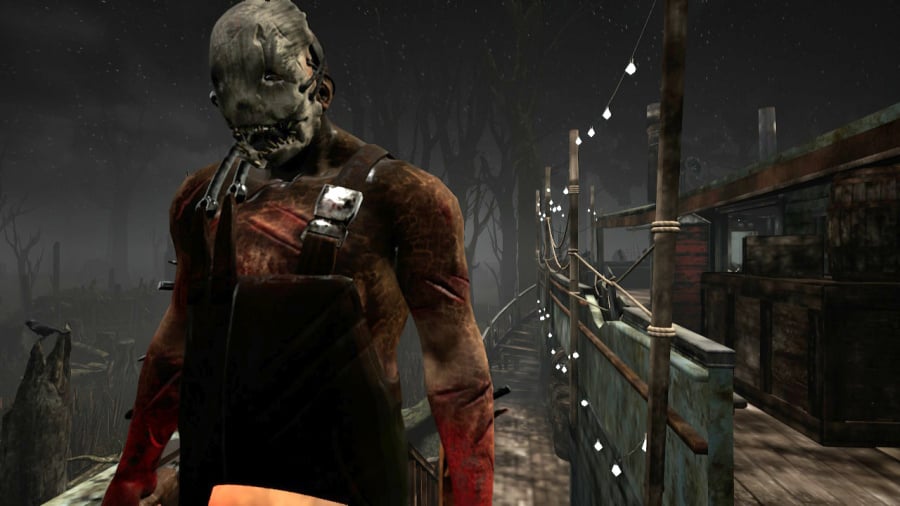 While concessions have certainly be made in order to get this version up and running on Nintendo’s console, what this does do is ensure that when you’re in-game, things run surprisingly smoothly. In handheld it manages to pretty consistently stick to 30fps at a 720p resolution; there are wobbles from time to time – which are more pronounced in docked mode – but overall, the sacrifices made have resulted in a perfectly playable (if rather ugly) portable version of Dead by Daylight.

Even more importantly, the netcode seems rock solid and we had no issues finding a game almost immediately as a survivor. Deciding to play as the killer does incur a wait, sometimes up to around five minutes, but this is also the case on all other versions of the game and is to be expected given there’s only one killer player to each match. With both in-game performance and online working solidly, our biggest technical worries about this Switch port have been assuaged – however, this version has other issues that come down to decisions made regarding previously-released DLC.

Dead By Daylight arrives at a premium price on Switch but doesn’t include all of the DLC it has accumulated over the course of the past few years, and that’s a whole lot of stuff. A bunch of pretty cool licenced killers and survivors from famous horror movies have been added to the game since its release in 2016, each one coming with a new arena to play in, which, thankfully, you do have access to here; it just seems a bit much to expect players – especially returning fans – to pay a premium for what is easily the least impressive version of the game technically and then have them immediately hit up the eShop to get their hands on the likes of Ghost Face or Michael Myers. Some other extra content, such as the Freddy Kruger and Leatherface characters, also seems to be entirely missing from this version and not available to purchase from the eShop alongside everything else at this moment in time. 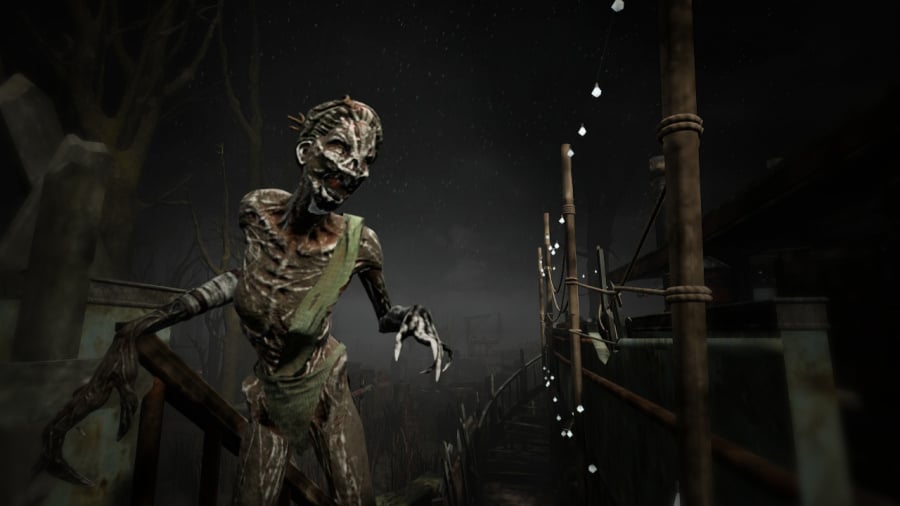 It’s also a huge shame the developers couldn’t manage to figure out a way to add cross-play with other versions of Dead By Daylight, as this could have been a real winner for folk who’ve pumped hundreds of hours into it elsewhere and just wanted to be able to go mobile with their characters from time to time. If all the DLC had made it into this package and cross-play had been included, it would be so much easier to overlook the graphical failings and slightly shoddy feel of this Switch port, but as it stands it’s hard to shake the feeling you’re getting the bare minimum and being charged quite harshly for it.

Dead By Daylight has been around for quite while now and has remained a pretty popular game on both PC and console over the years. It’s a straightforward and repetitive online affair that, if you’re lucky enough to be matched with the right bunch of randoms or happen to be playing a custom match with friends, can deliver the goods in terms of frights and tension from time to time. However, it has also always been a pretty clunky affair, a fact which is amplified further here by the noticeable graphical downgrade, laggy menus and the exclusion of a bunch of DLC that we really feel should have been included for the steep asking price. Still, if you’re a fan who wants a portable version to play on the go, this should satisfy your needs as long as you’re happy to grind yourself back to where you were at and fork out for your favourite killers. For everyone else, this is the least impressive version of the game available to buy at its highest price.