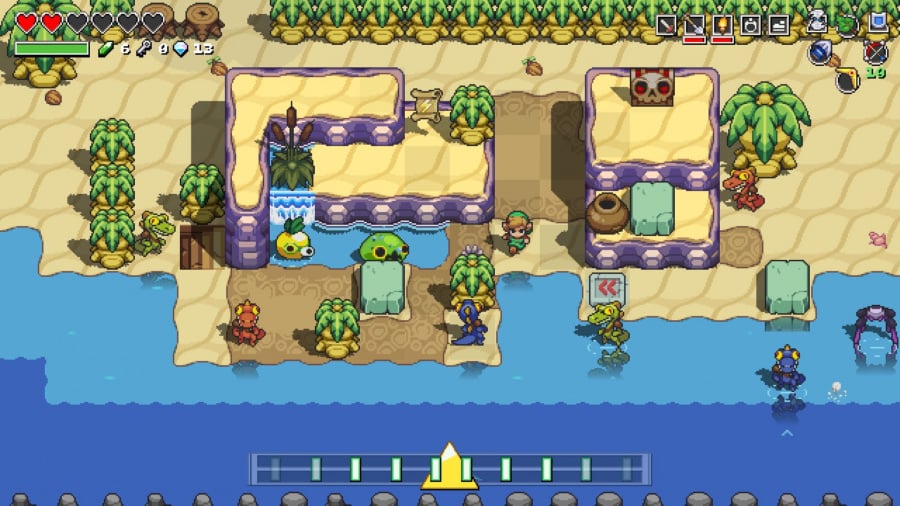 From the opening menu that uses not the rousing Zelda overworld music but the understated theme from Ocarina of Time‘s title screen, you know you’re about to go on a special journey. Cadence of Hyrule (we won’t bother with its ludicrously long official moniker) takes the music we all know and love and remixes it with the gameplay itself, sewing those tunes into the fabric of Hyrule in a way that feels totally natural, but also energetic and fresh.

Music has always been an integral part of the series. Mute the volume while you’re playing the original Legend of Zelda on NES and the difference Koji Kondo’s overworld theme makes is immediately apparent. That game, like many 8-bit classics, relied on music to stir the player and make their adventure feel ‘epic’ in a way the visuals simply weren’t capable of. As time and technology advanced, those themes became less necessary – part of the reason why the Hyrule of Breath of the Wild has only incidental motifs and a more ambient soundtrack. The landscape itself and the wind through the grass tell the story nowadays; a romping overworld tune would get on your nerves after a few hours. What Brace Yourself Games does by fusing the kingdom of Hyrule with gameplay from its hit indie game Crypt of the NecroDancer is make those treasured melodies vital once again. 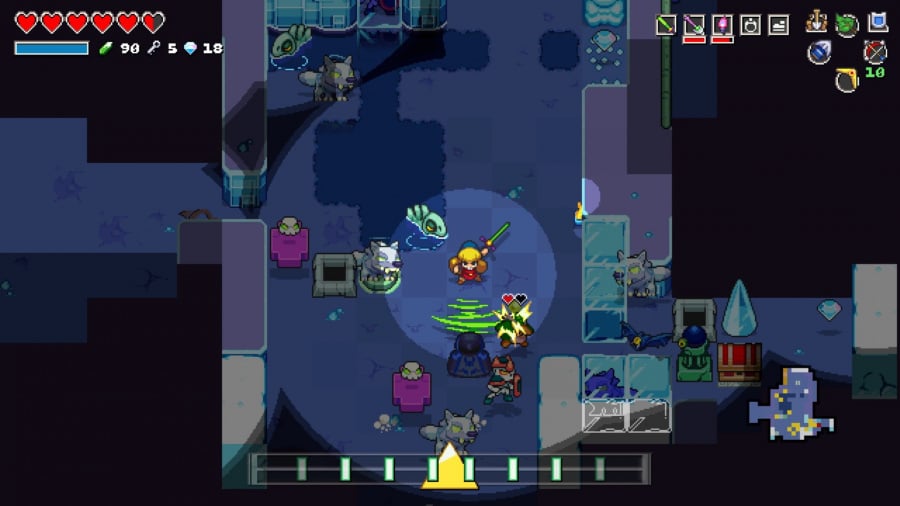 A tutorial with Cadence (the main character from Crypt of the NecroDancer) gets you to grips with the basics. You can use the left stick to move in the cardinal directions if you choose, but early on you are encouraged to use the D-buttons instead (they’re more precise when it comes to keeping in time to the beat). The D-pad on a Pro Controller will suit you very well, but the buttons work fine too.

Only when enemies are present must you move to the beat. You attack adjacent baddies automatically using your equipped blade by simply pushing towards them. There’s no health penalty for missing the beat but your movement is impeded for a moment which becomes a problem when you’re surrounded. Once the screen is clear the flashing disco chessboard pattern disappears from the ground and you’re free to move as you please.

Each enemy has a different attack pattern and number of hearts and you’ll have to strategise carefully – you probably don’t want to accidentally aggro an Armos if you can avoid it (or worse, an otherwise docile cucco). It takes time to learn and master Cadence of Hyrule’s way of doing things. Our immediate impression was that the game was very challenging; you’ll likely die several times before you learn basic enemy patterns. 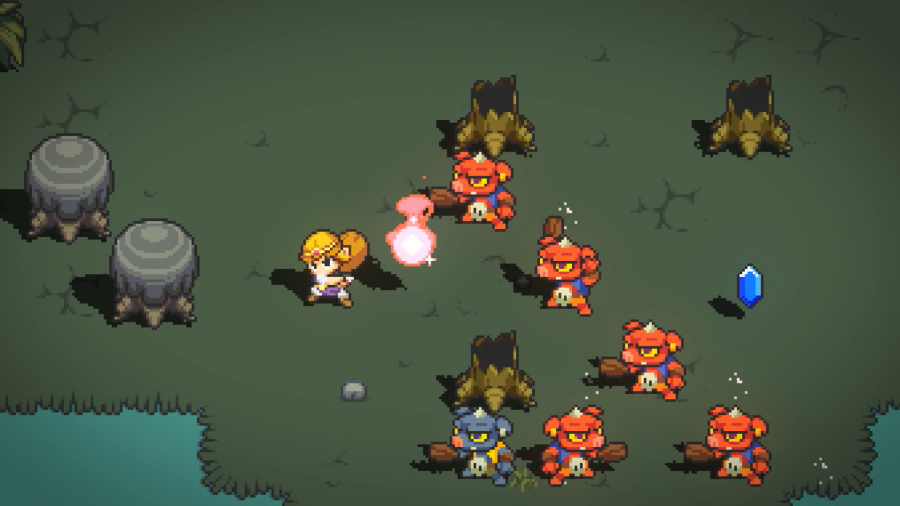 However, after half an hour or so, you become accustomed to the mechanics and unlock gear that makes things a lot less fraught. Switching from the dagger to the broadsword is a massive help; the longer blade targets the three squares in front of you rather than just one and this makes managing multiple enemies at once easier. We soon relaxed into the swing of things while wielding it and were able to get stuck in without considering every single step.

And consideration is the name of the game. There’s a lot of analysis to be done and the beat propels you forward constantly in a way you might find stressful at first. For players who missed Crypt of the NecroDancer, imagine playing chess with only a rook, and you only have half a second to consider your move as your enemies come towards you to the tempo of the music whether you move or not. It’s tough at first, but once you get the hang of it, you’ll start wishing the beat was a bit faster in some scenarios.

The onscreen HUD which indicates the beat is kind of useless because you rely on the audio – we ended up turning it off. We suppose you could use it if you were unable to hear the music, but if that’s the case it’s best to wait until you can. The game looks fantastic, especially in handheld mode, blending the visual DNA of The Minish Cap, A Link To The Past and, of course, Crypt of the NecroDancer. 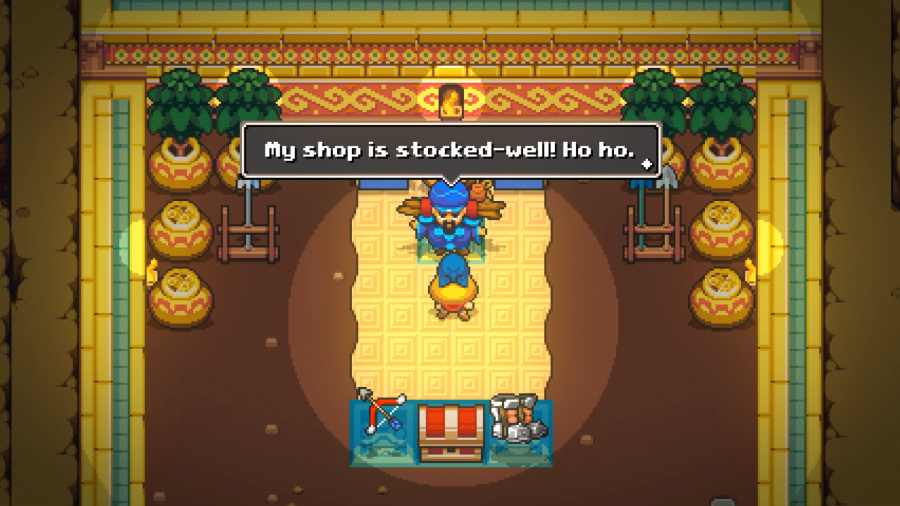 You get an early choice between playing as Link or Zelda, although later on in the game you’ll have the opportunity (and the need) to switch characters. Put to sleep by the musician Octavo, the Princess’ father has been imprisoned in his castle and you must defeat four champions to break a seal and return the kingdom to normal. The characters have slightly different abilities (Zelda can wield Din’s Fire and Nayru’s Love – both tied to a magic meter replenished by defeating enemies – whereas Link has a shield to deflect projectiles from the beginning).

When you die you’ll awaken in a shop where you can spend diamonds (which appear when you rid a screen of enemies) to bring back a piece of equipment when you restart. You generally find expendable gear by killing enemies, but starting a run with a shovel, say, can be handy. These objects have a durability meter, but we rarely found ourselves wanting for a necessary item and killing a few enemies always produced what we needed. Certain things remain with you always once they’ve been found (diamonds and equipable gear that you map to your face buttons like your boomerang, hookshot, etc., plus significant unlocks in dungeons), but otherwise you’ll lose all rupees and items when you die. That might sound harsh, but in reality Cadence of Hyrule is far more forgiving than your average roguelike. 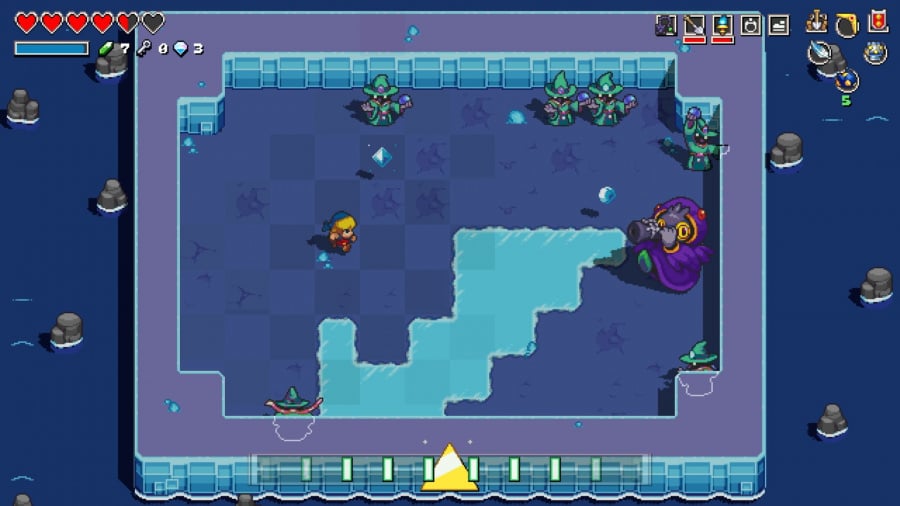 You can respawn at any of the Sheikah Stones which you’ve activated on the world map, and you’ll also unlock the ability to fast travel to them at will. Despite tying you down to the beat, Cadence of Hyrule is otherwise very respectful of your time. A fortune teller will give you hints about where to go next if you’re stuck, and you can warp to her as well. The opportunity for beat-based speed runs or minimum step runs is immense, and we’ll certainly enjoy watching them when AGDQ next rolls around. Your game time, steps and deaths are all tracked and recorded on an online leaderboard once you complete the game.

And you’ll probably die a lot. After the initial learning curve, the game settles into a nice groove and none of the boss fights are particularly challenging but the last couple of the five main dungeons really up the difficulty through the sheer number of enemies. The dungeon interiors are randomly generated each time you die, but it was only really in the latter dungeons that we noticed (previously we’d assumed we got confused about the geography or taken the wrong set of stairs). We were so consumed by the music and the beat that the actual layout of the dungeons took a backseat in our brain. The overworld, too, is randomly generated from a seed that’s different in every save file. 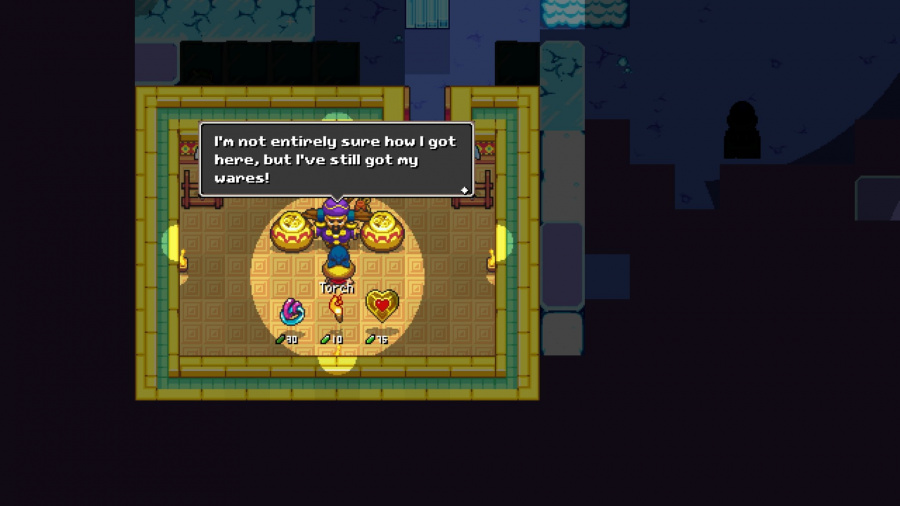 The joy of exploring areas both inside and out is enhanced by rediscovering music you remember so well, and not only the beat-heavy versions. When you clear a screen of enemies the music relaxes as well. Chilled, lounge versions of classic tunes drift in as you explore; finding a windmill early on was a particular highlight, but there are loads of examples. Well-known melodies flow into other less prominent ones from games across the series and it makes you want to go back to the originals, too.

The game is laden with options to tweak the experience to your liking – you can even turn off moving to the beat, if you like. This Fixed-Beat mode enables to move freely and enemies only move when you do. This lets you pause and strategise, transforming the experience into something very different, but some players might prefer it. Playing in this mode will upload your score to a separate leaderboard. We completed the game (as Zelda) in just over 8 hours, although number 1 on the leaderboards at the time of writing is a bewildering 37 minutes 29 seconds with only 5,168 steps and just one death. We’re itching to go back and try playing as Link – we reckon we’ll be able to cut our first time in half, at least, and this is a game that’s just begging to be replayed. 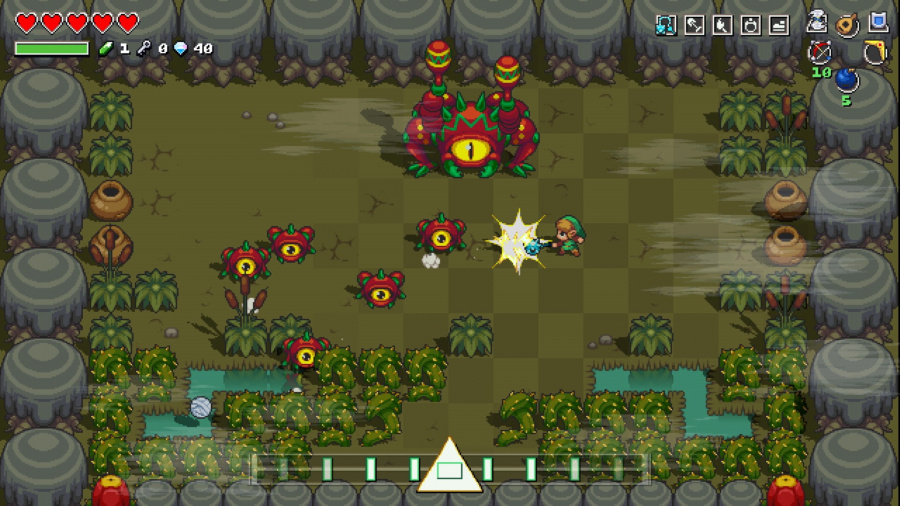 Also worth mentioning is the co-op mode – drop-in/drop-out if you’ve advanced enough through the main game, or accessible from the main menu otherwise. It works exactly as you’d imagine and is excellent if you’re both comfortable with the basics.

If there’s one thing that stands out as an omission, it’s HD rumble. It feels like a missed opportunity to not have the pulsing beat reflected with a little subtle haptic feedback. This might also have made playing with the sound off more manageable when you’ve forgotten your headphones on public transport. Not that we’d ever recommend playing with the music muted, but the reality is that sometimes it’s not practical to have the volume at max, especially with a portable system like the Switch. We’d love to feel the beat with HD rumble, too, and we’d welcome a patch.

Brace Yourself Games has crafted a unique Zelda game which fits in perfectly with the rest of the family. A transfusion from Crypt of the NecroDancer gives the old top-down template a fresh spin but it still manages to feel like Zelda. By allowing a talented indie developer to play in the universe, Nintendo has gained a fantastic entry in the franchise that feels like a celebration – specifically of its music, a part of the series destined to take a back seat as the majesty of Hyrule is increasingly conveyed through the scale of its world rather than melodies from the days when the ‘kingdom’ was really a walled garden. Cadence of Hyrule is not just a brilliant game, it’s a brilliant Zelda game – one that you won’t want to miss.

Finally, we know what Mortal Kombat supervillain Shao Kahn looks like under all that armour • Eurogamer.net

FIFA 20 Ultimate TOTS: Squad predictions as Team of the Season So Far is revealed

THE FIFA 20 Ultimate TOTS SF reveal looks set to be made this week, with some top predictions being

DESTINY 2 Trials of Osiris rewards are being revealed for Guardians this week on PS4, Xbox One and P

Ori And The Will Of The Wisps — New Gameplay Today...