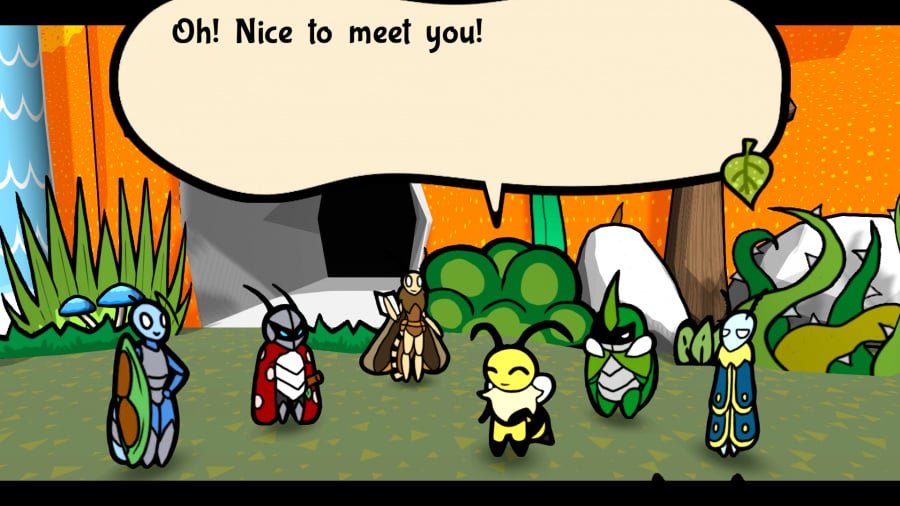 It’s no huge revelation that Nintendo’s refusal to return the Paper Mario series to its RPG roots has alienated a lot of players. The exploration and puzzle-solving of the latest entries Sticker Star and Colour Splash is an acquired taste, and many gamers lament the fact that the big N chose this direction for the franchise. Consequently – as with many lapsed series – it falls to the indies to fill the gap.

And, well, Moonsprout Games have done just that. Bug Fables: The Everlasting Sapling isn’t just a love letter to Paper Mario: The Thousand-Year Door; it’s that GameCube classic’s terrifying stalker. We can’t stress it enough; this is Paper Mario. From top to bottom, it’s spiritually identical – from the writing style with its many little comical asides, the pop-up book graphics, the music (that “battle won” theme is shockingly evocative of Thousand-Year Door) all the way to the individual animations; bee protagonist Vi’s little arm flail precisely recalls Mario’s. It’s so similar that it’s almost unnerving; like Bug Fables has killed Paper Mario and is wearing its skin. But, you know, in a good way. 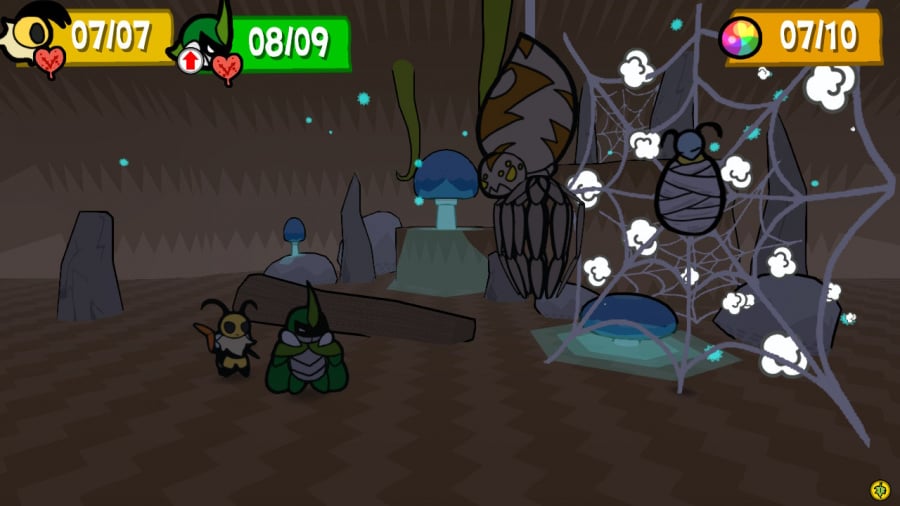 It goes without saying that the battle system is lifted wholesale, too. Attacks are enhanced by timed button presses and analogue stick motions, powerful special attacks cost “Teamworks Points” to use, enemy blows are blocked by hitting the A button at the right time… you get it. There’s a grand little feature called Turn Relay, which allows one of the insects on your little team to give their turn to another at the cost of a little bit of strength, but it allows you to utilise more powerful or easy-to-perform attacks if you wish, as well as adding more depth and strategy to the combat.

Which is necessary, because Bug Fables bites a little harder than its inspiration, with both the exploration and battles being more challenging from the off. You also receive a “Hard Mode” badge- er, sorry, medal early in the game, which can be equipped at no cost and increases enemy damage and resilience, for those who want a little more tension. Still, even without it, you’ll need to play cleverly and carefully, managing your resources and defeating enemies which will net you experience points that, true to form, level your team up and allow you to increase a stat of your choice. These milestones take time to reach, so you’ll need to rely on your skills and tooling up with a good selection of gameplay-changing medals. 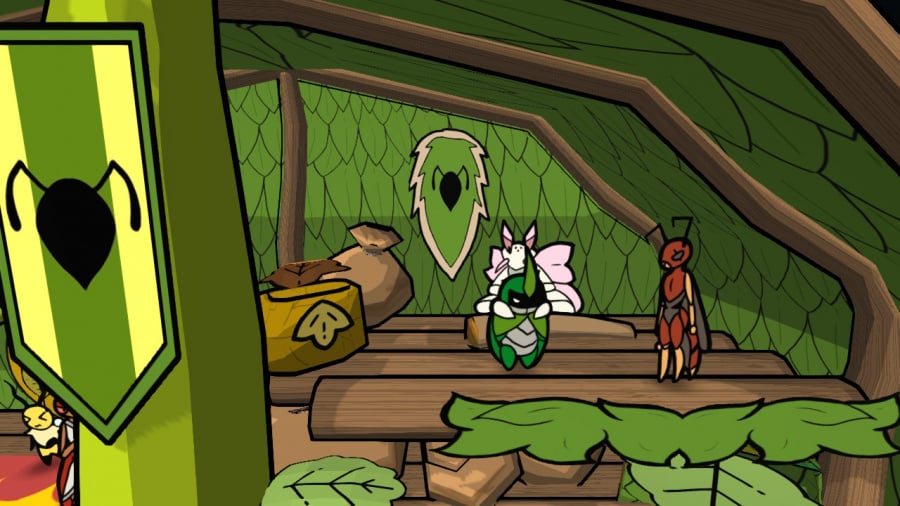 Combing the well-designed environments to solve puzzles and find the way forward is a treat, with enemies patrolling each map. You can knock them off balance with your basic attacks, giving a turn advantage in battle if you’re able to do so. However, as you’d expect, they can flip the script on you if you’re not too careful. Your bugs’ abilities also allow you to interact with your surroundings in useful ways – in the early game, you’re able to freeze water droplets then move the frozen blocks around and use them to climb up and further navigate the hostile terrain.

In fact, it’s in the navigation that Bug Fables stumbles just a little. Movement feels fine and smooth, but there’s a fair amount of platforming in each area and this can feel a touch awkward – jumps that really should be easy to clear become trickier when you’re navigating 3D space with a flat 2D character. It’s far from game-destroying, but it may make you curse a little when you fall off a tiny little rock yet again because it’s tricky to judge your position relative to it. It could also be a little less awkward to switch out your group’s leader when on the field, but that’s really stretching for nitpicks. 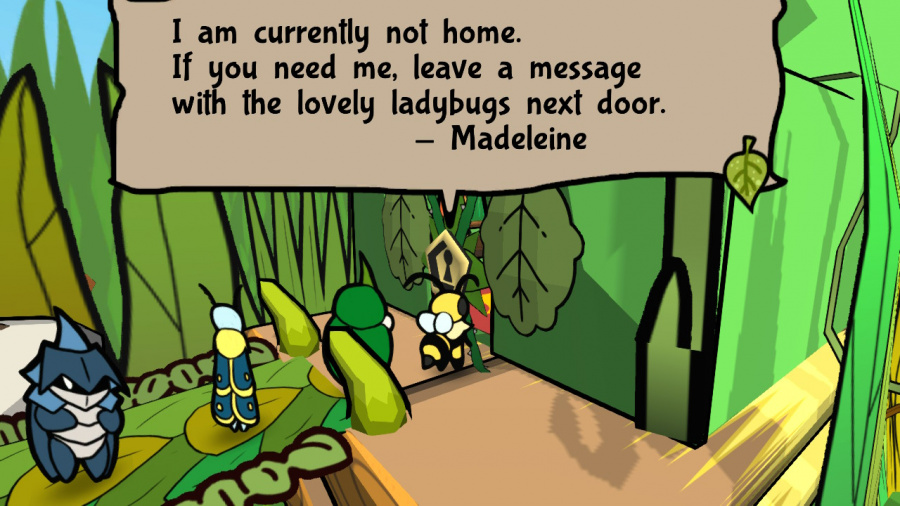 The final Intelligent Systems import here is the game’s writing and tone; it’s not a laugh riot, but the characterisation is light-hearted and it’s more concerned with being charming and fun than bogging the player down in angst or backstory – though there is lore to be found if you deign to look for it. Generally, it’s cheerful Saturday morning cartoon stuff that whizzes along at a cracking speed with distinctive, memorable characters and entertaining set-pieces.

Visually, Bug Fables is a gorgeous little thing, though a little more sparse and muted in colour than the Paper Mario series. The character designs are very likeable, though they’re clearly in some semblance of debt to Hollow Knight; at least it’s not just Paper Mario getting picked clean! Environments are attractive and atmospheric, helped along by the rather brilliant soundtrack from Tristan Alric. Everything comes together very nicely indeed, and each aspect of the game’s presentation enhances it.

A bit of a triumph, Bug Fables is a superbly polished independent tribute to the first two Paper Mario games – but that’s not to say it doesn’t have its own, strong identity. The sheer familiarity is a little bit wearying at times – seriously, it’s like it’s been traced over in places – but Paper Mario with the serial numbers filed off is still a very good time. There’s plenty to see and do, a rather compulsive card game to play and hidden secrets all over the place. Add all this silky-smooth performance, a splendid soundtrack and turn-based combat that’s never less than engaging and you’ve got a surefire winner here. Maybe now people will quit “bugging” Nintendo for a throwback Paper Mario. Pun intended. (Sorry.)