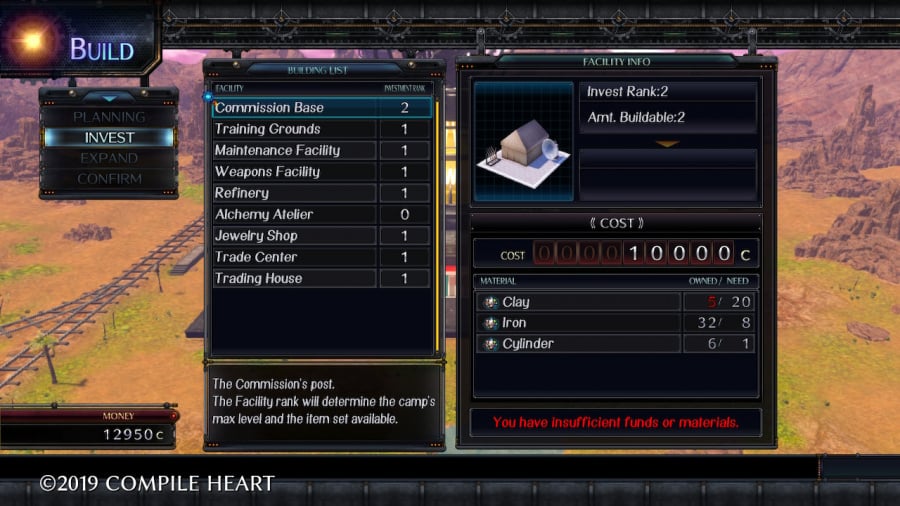 Say what you will about the overall quality of its output, but never let it be said that Compile Heart doesn’t love to make RPGs. The studio – best known for its successful Hyperdimension Neptunia series – has always been prolific, to say the least, but alas, it’s also developed a reputation for putting out many ‘filler’ RPGs that generally aren’t worth your time. Unfortunately, this latest release, Arc of Alchemist, falls in that category. There are some good ideas on display in Arc of Alchemist, but it notably fails to execute any of them in a meaningful or worthwhile way, making for a forgettable and easily skippable release.

The story takes place in a Mad Max-esque future in which the last remaining pockets of humanity struggle to survive in a barren, sandy wasteland. Quinn Bravesford – the sole wielder of a mysterious weapon called the “Lunagear” – acts as the main character, captaining a team of forgettable stereotypes that must traipse deep into the wastes in search of a fabled “Great Power” that will somehow pull back the world from the brink and put humanity on a safe path to the future. Unfortunately, that brief summary is about as deep as the narrative gets; there’s scarcely anything here in the way of effective characterization, plot twists, or generally effective storytelling. 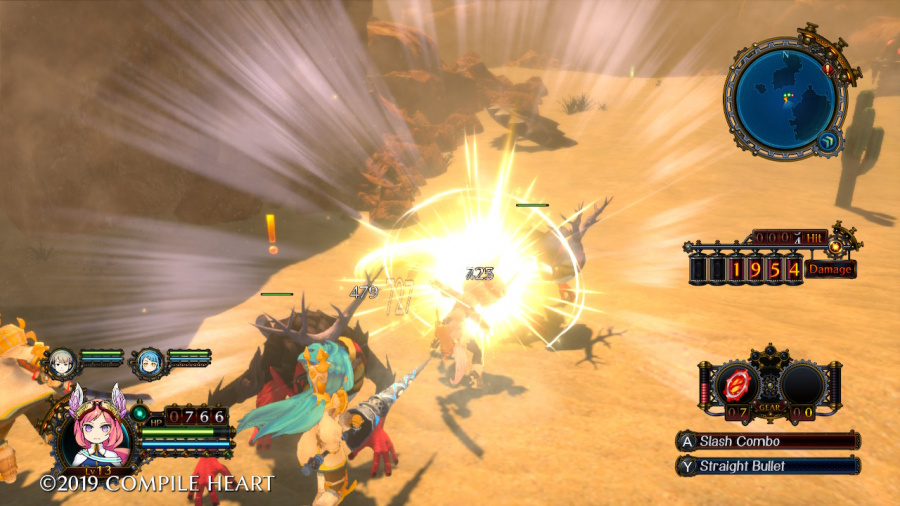 For one thing, you begin Arc of Alchemist with your entire team already assembled and already partway into their fateful journey, and the narrative simply doesn’t bother explaining who anybody is or how they know each other. ‘In Medias Res’ plots like this can certainly work in RPGs, but some legwork has to be put in somewhere that gives the player context for the relationships at play and such effort is kept to an absolute minimum in Arc of Alchemist.

Failing the characterization on such a foundational level as this then has the snowball effect of undermining one’s investment in the rest of the plot, which is earnestly told with such a painfully angsty, weight-of-the-world tone that it’s hard not to roll one’s eyes at least once per cutscene. “How Ironic. Our souls are as dry as the desert that surrounds us,” drones Quinn in yet another scene where her quasi-suicidal inner monologue broods. Ugh. Mercifully, a little more levity is sometimes introduced in brief scenes that randomly play every time you return to base (more on that later), but it’s no exaggeration to say that the storytelling in Arc of Alchemist just doesn’t work. 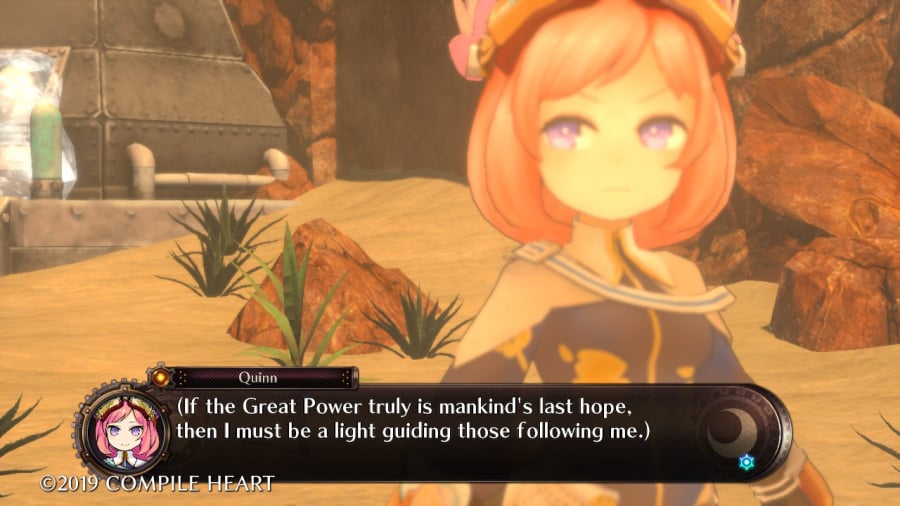 While not nearly as painful to deal with as the plot, Arc of Alchemist’s gameplay, unfortunately, doesn’t do a whole lot to inspire confidence. Your whole adventure consists of moving between different Event Points to trigger cutscenes and story fights, while the bits in-between allow you to explore the admittedly small handful of simple maps. Exploration, then, mostly consists of running down a few side paths to open up a treasure chest or two, and maybe along the way there’s a simple environmental puzzle to solve with your Lunagear. Using this tool, you can do things like cast fireballs to melt ice or conjure up cubes that you can use to jump to higher places. It’s nice that the developers thought to include simple puzzles to make exploration a little more varied, but the word “puzzle” is stretching it given how straightforward these obstacles are. On occasion, the rewards for exploring can almost feel worth the effort, but on the whole, it feels like the exploration was put in just to pad out the length of an already rather short game.

As you move through each map, you’re sure to occasionally be accosted by some monsters, none of which put up meaningful resistance to your party. Combat takes the shape of a live-action hack ‘n’ slash, where you can bore through enemies using various combos and special drops from your Lunagear, such as a placeable sentinel that spits magic attacks at nearby enemies. Most enemies put up utterly pathetic resistance to your team, something which is only further underlined by how characters seem to level up after pretty much every enemy encounter.

The difficulty dramatically spikes, however, at many boss encounters, where you suddenly hit a brick wall and your team gets easily wiped. Such encounters can usually then be overcome by a bit of grinding, but the key thing here is how mindless the whole combat system turns out to be. There’s no real skill or tactics involved in battles; it’s just a simple matter of mashing attacks and occasionally dodging. Some flavour is introduced by how each weapon has its own unique attacks, but there’s otherwise very little in the way of incentive or, more bluntly, fun to be found in battling monsters. 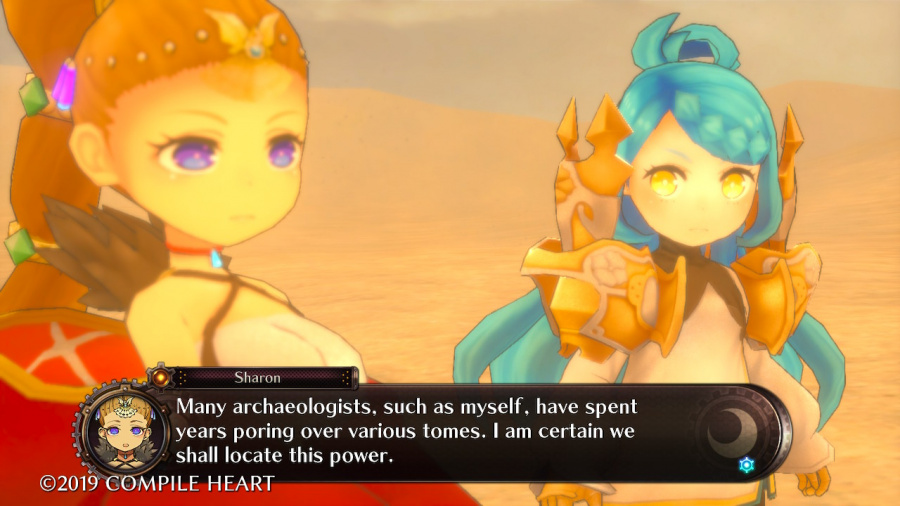 The other half of gameplay is found in a base-building, resource management sub-game that you can access from various crystals dotted around the maps. Back at base, you can do all the housekeeping things like tweaking your team and outfitting them with new gear, but the main draw here is the fact that the base can be expanded by spending a little cash and using the resource you collect out in the field. Building and upgrading structures opens new shops and expands their effectiveness, while placing certain facilities in close proximity to each other can net you even more bonuses. Like everything else in Arc of Alchemist, this base-building gameplay proves to be rather shallow in its implementation, but it does introduce a nice break from the otherwise ho-hum roaming of the endless deserts.

Arc of Alchemist would be bad enough with its passable story and bland gameplay, but we feel that special mention needs to be made about the atrocious performance, docked or handheld. Arc of Alchemist is a visually simple game to begin with, featuring chunky models and muddy textures galore, and yet it somehow manages to deliver these middling visuals to you at a ‘nice and cinematic’ 20 FPS at the absolute best. Realistically, whether you’re simply running across the map or fighting enemies, your experience will usually be hanging somewhere in the sub-15 FPS range. Given the performance, we were amazed that we didn’t encounter any crashes or bugs during our time, but let it be known that Arc of Alchemist struggles every single step of the way and certainly deserves to be in the running for worst performing RPG on the Switch. 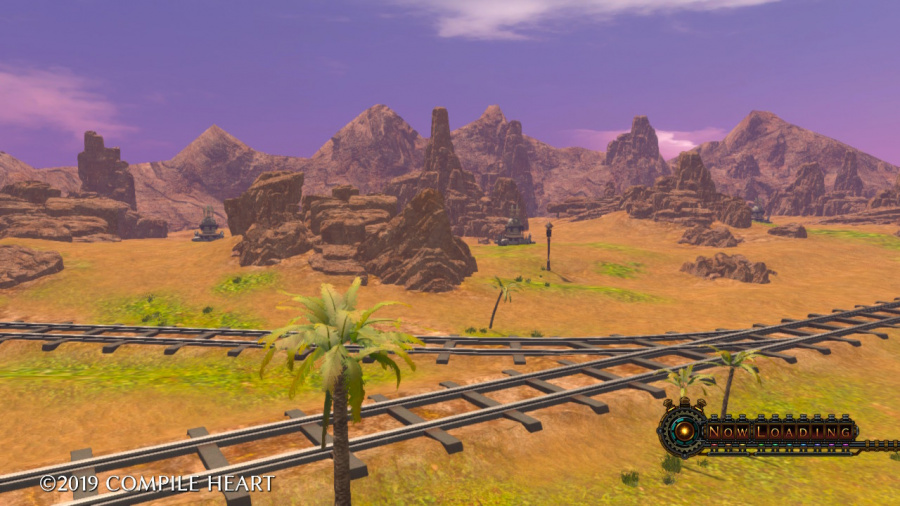 It bears mentioning that this English release of Arc of Alchemist comes with a few bonuses that have been included with the overall package; none of them are game-changing but they are nonetheless nice to have. The headlining feature here is that you can play as your other party members directly, and the other additions are the inclusion of some reworks to the UI and the base-building mechanics. Though you won’t probably notice the latter two features at all, other playable characters do help to pad out the replayability somewhat, although even your enjoyment of this is hindered by how you have to go all the way back to base each time you want to play as someone else. Unless you played the Japanese release when it came out last year, these additions probably won’t make much of a difference, but it’s nice to see the developers put in the extra time to make this version a little more playable, even if it doesn’t fix the game’s many other sins.

In sum, Arc of Alchemist is not worth your time. We’ll say it again just in case the people in the back didn’t hear: Arc of Alchemist is not worth your time. The story is barely serviceable, the gameplay is middling and uninspired at its very best, and the graphics often look like they could’ve been pulled from an early 3DS game. That would all be damning enough if it at least ran well, but Arc of Alchemist in fact runs at laughable framerates all the way through. That would be damning enough, but then the developers have the gall to ask you to pony up forty bucks (at time of writing) for this mess. The Switch library is packed to bursting with loads of fantastic RPGs that are each sure to deliver a great experience. This is definitely not one of them. Please, don’t waste your money on Arc of Alchemist.

A year since its last trailer, here’s a peek at Soviet...

Warzone tips for learning to reliably Get Some • Eurogamer.net