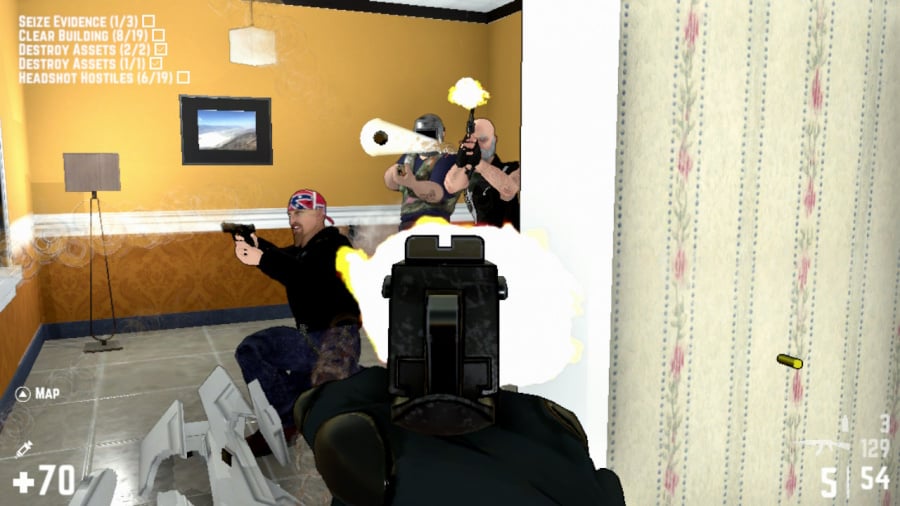 ‘Kick doors, kill men.’ These four seemingly simple words, which appear on-screen while you patiently wait for one of RICO’s procedurally generated levels to load, might seem like a throwaway line – and yet they perfectly sum up its bombastic simplicity. For all the extra objectives and features, everything boils down to putting boots to doors and asses, and that’s what makes its first-person shooter action so addictive.

Falling into that randomly laid out and semi-roguelike corner of the industry populated by the likes of City of Brass, RICO is a co-operative FPS that revels in the moment-to-moment exchanges of its gunfights. You play an agent of a task force sent to hunt down and destabilise criminal organisations the only way you know how: by killing every drug-peddling, gun-running felon stupid enough to stray into your crosshairs. You’re here to deal out justice, one room at a time. 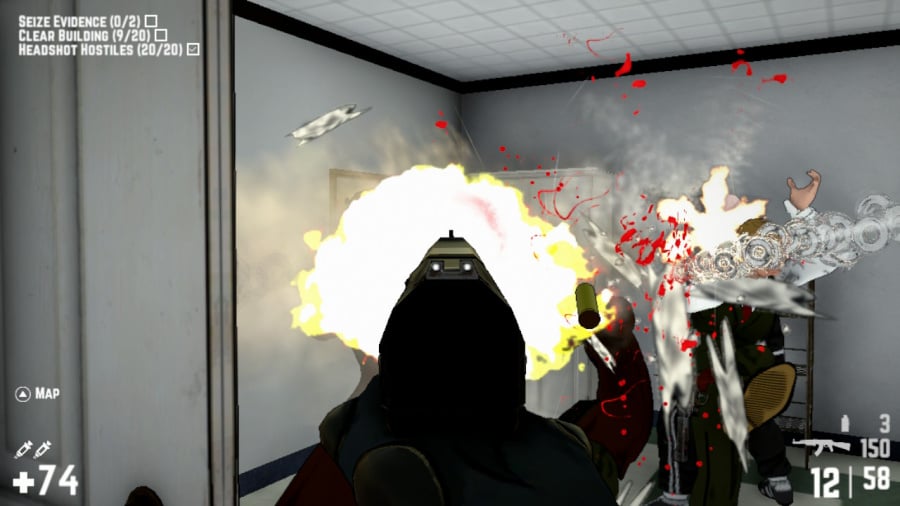 Quite literally, too. You’ll work your way through a web of criminals, each posted throughout a randomly-generated set of rooms. Sometimes you’ll need to collect evidence in briefcases, defuse bombs in a given timeframe or destroy assets in the field, but while you’re doing that you’ll need to end the life of every criminal you encounter. Every time you reach a door you’ll press ‘B’ to kick it in and initiate a short burst of bullet time. When every enemy inside is dead, the room will be cleared and you’ll be free to pursue any objectives or collect any ammo or health before progressing to the next room.

By defining its action with short bursts of gunplay, each set of randomised rooms is different; you never know what you’re going to get next. Will it be a large open drawing room filled with shotgun-wielding jumpsuits? Or a small corridor with bald-headed enforcers with tyre irons and desire to bash your head in? Will you choose to go in with the accuracy and reduced range of your pistol, or try and clear house with the extra power and unwieldy recoil of an AK47-style assault rifle?

You can actually finish a level at any time by returning to the door you first entered it from, but the more rooms you clear and the more objectives you complete, the better your rewards at the end. You’ll earn XP, which will level you up and unlock new traits and weapons, but you’ll also earn merits. These tokens enable you to buy new guns, attachments and tactical items, but also top up your health and your armour. Your health level is persistent throughout, so forget to restore your health and you’ll need to fight at a disadvantage and hope you breach and clear a room with some health pickups within. 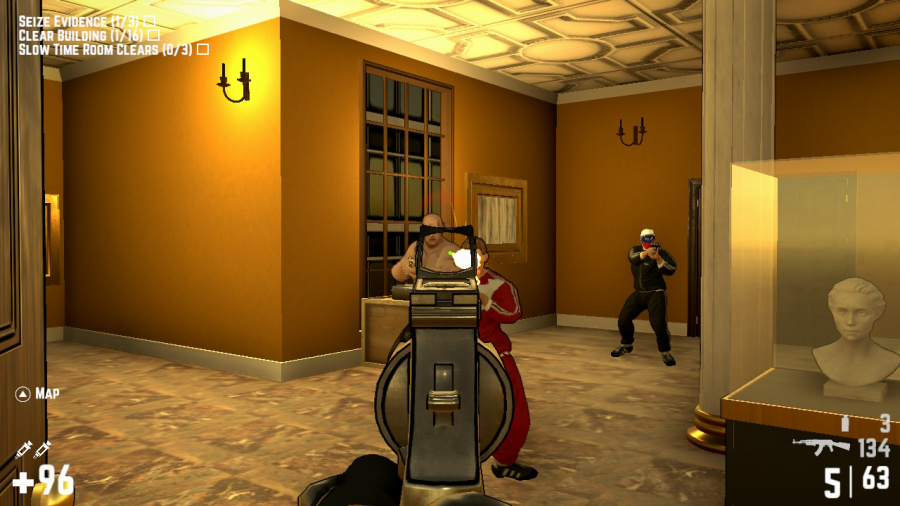 Backing up that roguelike persistence comes the risk/reward of each mission. Should you die at any point while kicking doors and killing men, that mission will remain permanently failed and it’ll black out any further missions along that arm of the sting. By losing those missions you’ll also lose a source of XP and merits, so it pays to play with caution as much as it does with gung-ho gunplay. You can run and slide, enabling you to pull off the kind of moves that would turn John Woo green with envy, but it’s easy to get shredded by a flurry of enemy fire, so you’ll need to use those bursts of slow-mo to hit the biggest threats in a room quickly and pull back to pick off the rest by training your iron sights on the doorway.

You can play through every mission solo – whether through a campaign or missions, in quick play or in a daily set of rooms – but things get really interesting when you play in co-op. You team up with a buddy locally via split-screen in docked mode, or you can head online and unleash bullet-based justice from afar. With a partner in tow, you’ll need to breach doors at the same time in order for bullet time to kick in, so working together is the only way to truly excel. And it makes for one hell of a rush as you both breach a room from different directions, causing the enemies within to split their attention before a barrage of death arrives forthwith. 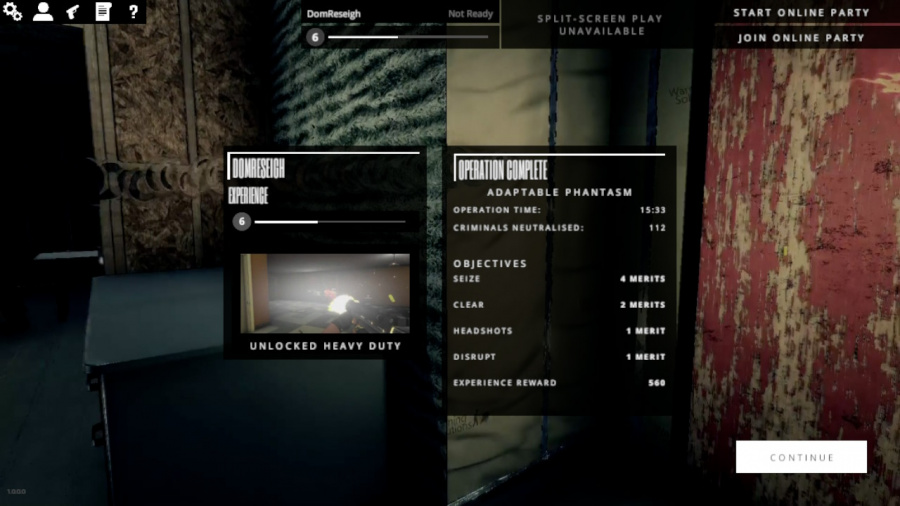 On Nintendo Switch, loading times can sometimes stretch on a little too long and textures can occasionally take a bit too much time to pop in, but performance is mostly pretty solid. With its semi-cel-shaded graphics and simple corridor and room designs, RICO isn’t going to make your eyes glaze over with its artistic splendour, but the simple gunplay and over-the-top encounters mean it’s a perfect fit for Switch’s pick-up-and-play ethos. There are even daily missions to complete, which come with leaderboards and the chance to earn a currency that unlocks new weapon skins, so you can keep unlocking new things even when you’ve only got five minutes to spare.

RICO is simple, moreish fun in arcade FPS form; a literal corridor shooter that makes every gunfight a glorious exchange of bullets as you fight your way to the words ‘Room cleared’ over and over again. It’s great fun in single-player, but when you head into each randomised set of rooms in co-op, you’ll shoot your way into an interactive buddy cop movie right there in the palm of your hands. Loading times and the occasional bit of pop-in aside, this is another fine addition to the console’s growing list of first-person shooters.