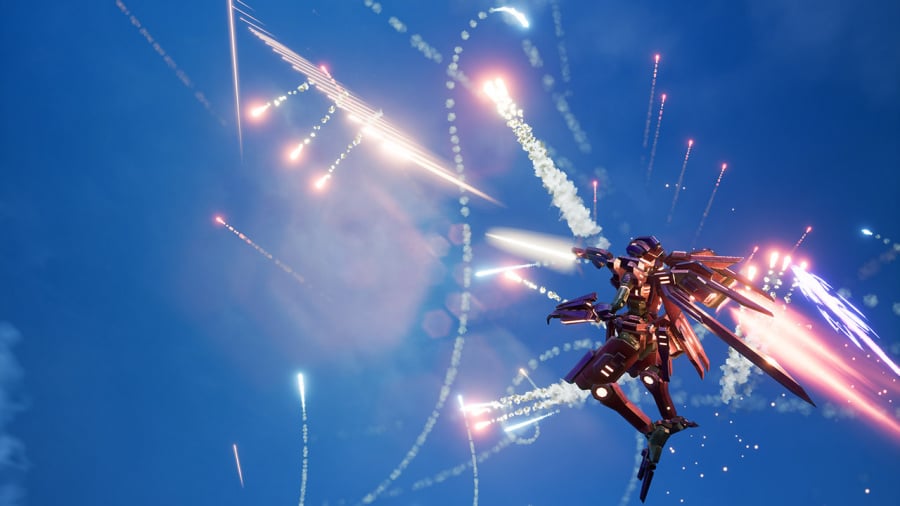 Giant mechas have been a mainstay in games for decades. From the terrifying nuclear-capable behemoths of the Metal Gear series to the transforming Skells of Xenoblade Chronicles X, they’re the sci-fi equivalent of dragons: huge, devastating machines perfect for traversing deadly landscapes and obliterating any unfortunate foe that happens to be standing in their way. Of course, it helps that they also look pretty darn cool to boot.

With Daemon X Machina still oiling its joints in development, the Switch is crying out for a mecha title truly worthy of standing toe-to-toe with some of the all-time greats. 2018’s Assault Gunners HD Edition made an admirable attempt, but with Project Nimbus: Complete Edition, has developer GameCrafterTeam delivered the Switch’s first must-buy mecha game? Well, that really depends on your affinity with the genre. 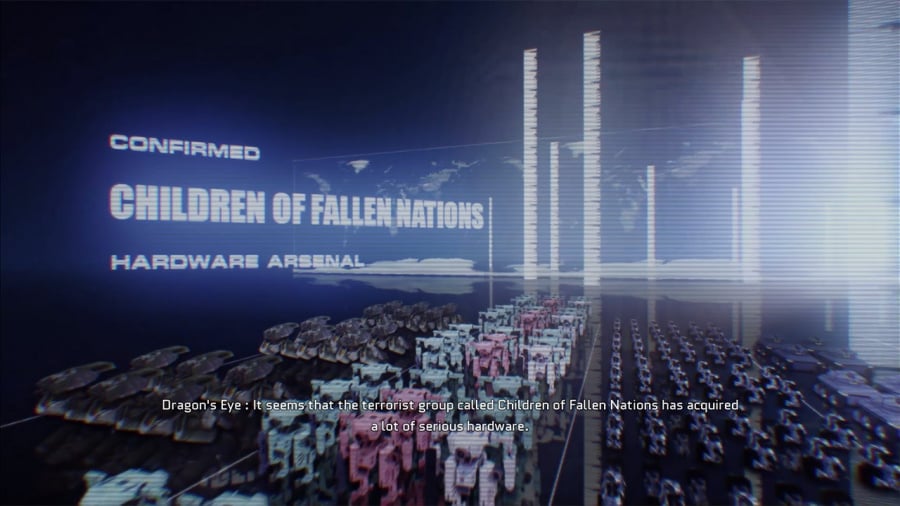 Right off the bat, the level of quality and care that’s gone into the overall production of Project Nimbus is really impressive. Fully-voiced cutscenes set the tone for each of the campaign’s missions, and while the story itself is nothing particularly spectacular (two warring factions take to the skies following the devastation of the earth’s surface), the developer has taken a commendable stab at making a game about high-tech mechas seem, at the very least, plausible.

Over a dozen different mechas (known as ‘Battle Frames’) are available to pilot in the game, all of which vary in appearance and stats. You’re often limited to certain models during the campaign depending on the current mission at hand, but two additional modes – Survival and Warfront – allow you to choose from a reasonably generous selection. Despite this choice, however, you’ll find that all of the Battle Frames contain more or less the same basic set of weaponry: a rapid-fire fully automatic gun, a rail gun, guided missiles, drones and trip mines. Once you’ve found a mecha with the right rate of fire or bullet capacity for your particular playstyle, there’s little incentive to switch to a different one. 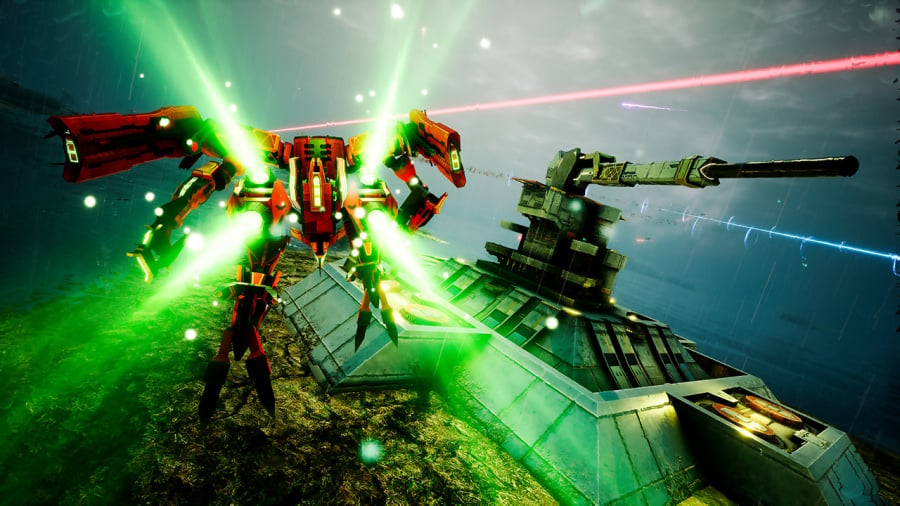 Most of the missions within Project Nimbus contain one very clear, simple task: eliminate all enemy forces within the area. The arenas themselves are visually pleasing enough, ranging from huge open vistas back-dropped by a gorgeous sunset reflecting over an ocean to more confined spaces broken up by sliding doors and sloping corridors. Unfortunately, the effort to make these levels aesthetically appealing has led to a severe lack in depth or variety. The open space environments are exactly that: huge open spaces devoid of anything you can actually interact with. It could be argued that this was fully intentional in order to focus the player’s attention solely on the action itself, but there’s an undeniable sense that you’re just repeating the same stages over and over, despite the game’s efforts to inject some sense of progression via the plot.

Thankfully, the combat itself is satisfying enough to alleviate this issue somewhat. The Battle Frames can be manoeuvred in any direction with the analogue stick, and altitude is adjusted by holding X to ascend and B to descend. Enemies normally enter the stage in groups and are highlighted clearly in red. Dispatching these whilst they’re grouped together is a lot easier (not to mention more thrilling) than chasing them down one by one, and after playing for a little while, you’ll come to develop your own strategies to defeat them as quickly as possible.

One particularly effective method is to unleash a barrage of guided missiles toward a close-knit group before picking off each enemy with the powerful rail gun, but the game does a remarkable job in encouraging usage of every available weapon. This is admittedly thanks, in part, to the varying reload times of the weapons which, if not managed carefully, can leave you very vulnerable to attack, forcing you to choose a different tool for the job. 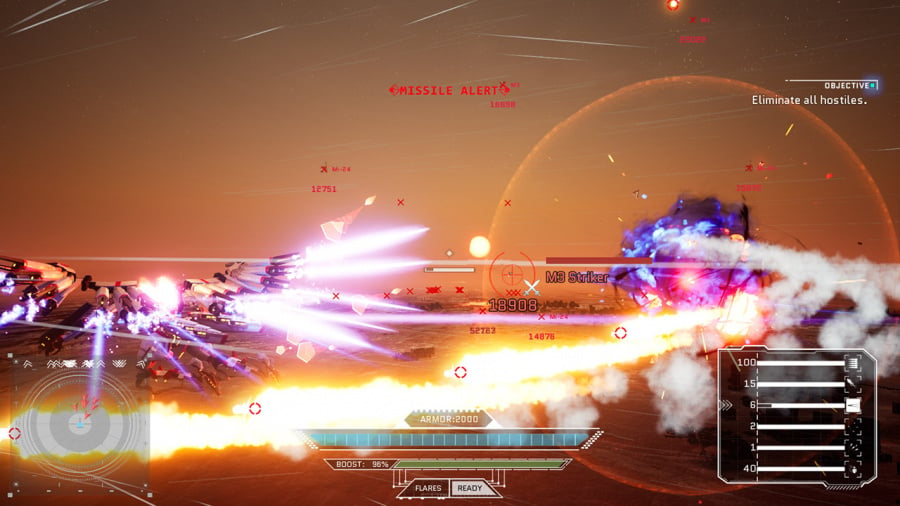 In addition to the main campaign, Survival and Warfront offer varying levels of replay value. Survival is exactly what you’d come to expect: you’re pitted against wave after wave of enemies which will increase in volume and intensity until your eventual demise. This mode is fine, but repetition rears its ugly head here, and you’ll more than likely be tempted to quit before the enemy even has a chance to defeat you.

Warfront, on the other hand, has a bit more meat on its metallic bones. Here, you’ll initially have access to just one basic Battle Frame, but by completing objectives – such as base defence and assassinations – you’ll gain experience and resources, allowing you to unlock new Battle Frames or upgrade the capabilities of your current models. It’s pretty shallow stuff overall, but it at least provides a decent enough incentive to keep playing for a little while longer.

Project Nimbus: Complete Edition is a game that sports tight, engaging gameplay, but fails to back this up with compelling reasons to play for the long haul. On the surface, there’s a generous serving of modes, missions and weaponry, along with impressive visuals and three difficulty options to sink your teeth into. Unfortunately, repetition sets in far too soon, and eventually you’ll want to store this mecha back in its hangar. The wait for the Switch’s first truly comprehensive ‘Big Robot’ game continues.