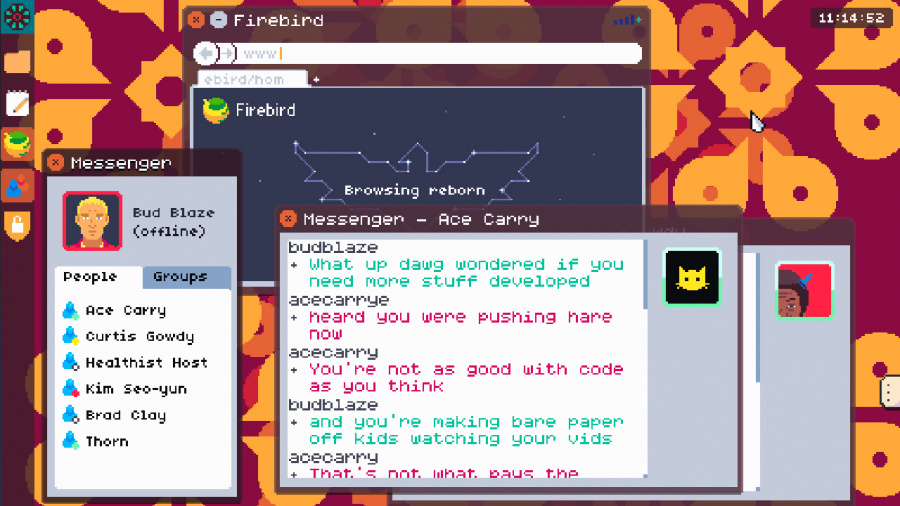 Mainlining places players in a world where the Government has introduced the BLU Pill Act and reactivated the secret service network known as MI7, giving them full and unadulterated access to the personal online information and lives of the population within their jurisdiction on the internet. You play as a member of MI7 charged with hunting down the members of a criminal gang using your investigatory prowess to sift through information, grab documents, hack IP addresses and track suspects until you have enough evidence to ensure you can take them down permanently.

Developer Rebelephant describes its game as being a mirror held up to real-world scenarios, specifically the attempted introduction of the Snooper’s Charter in 2016 by (then) Home Secretary Theresa May, which would have seen secret services enjoy the sort of total power deployed to MI7 here in Mainlining. The game, according to its devs, sets out with the ambition of questioning techno-ethics and whether it is acceptable for an organisation to wield this sort of power over personal information. 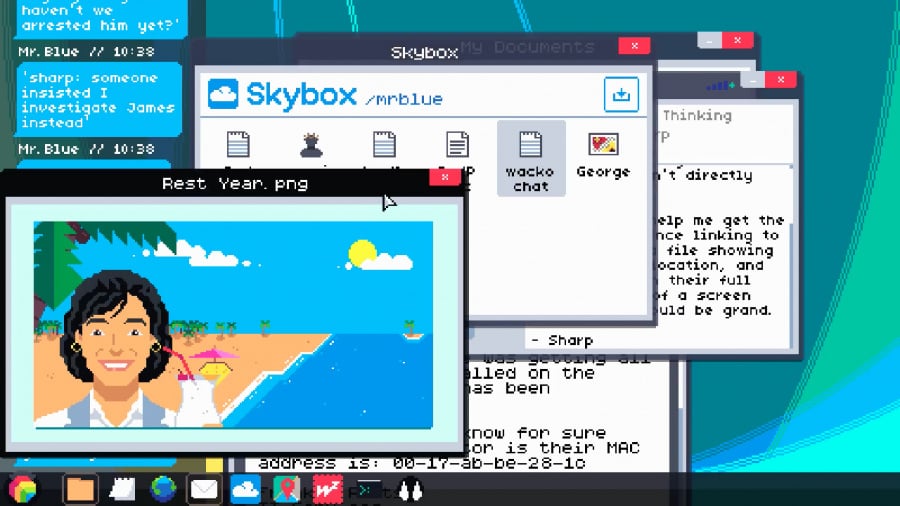 It’s an interesting, if not entirely original premise, and it takes place within a well-realised little pixel homage to the internet landscape of yesteryear. Indeed, its parody websites and pixel recreations of old PC user interfaces are by far the biggest draw here as, in actual practice, the game fails to live up to its promise, relying on pretty bog-standard caricatures of the types of people you’d expect to meet frequenting the blogs and chatrooms of the early web. It never actually says anything big or clever about real-world events and is further negatively impacted by the fact its hacking gameplay is shallow, repetitive and – on Switch, at least – completely hamstrung by a pretty terrible control interface.

Investigations in Mainlining tend to consist for the most part of you logging to your MI7 portal, searching a website which you’ll have been given information about then pinging it to grab its IP address; you’ll then hack the IP address (in no way as exciting or cool as it sounds) and make your way to the owner’s personal information dumps. From here you proceed to download as many files as you fancy and sift through them for information until you have what you need to make an arrest.

It’s a simplistic, repetitive cycle, which could be forgiven if it wasn’t for the fact it often descends into trial and error over what constitutes a vital piece of evidence. There’s also absolutely no form of penalty if you try to make an arrest and give the wrong information. In making an arrest you must fulfil a handful of specific parameters: find the suspect’s real name, where they reside and provision of one piece of evidence to support the case being made. Only one piece of evidence is allowed, and choosing the right piece to attach is oftentimes an exercise in blindly trying until you get it right, as there’s no discernible reason why one is of any more use than another; it doesn’t make any logical sense. On top of this, as we’ve said, you won’t suffer any punishment (beyond a newspaper excerpt flashing up onscreen to laugh at the bumbling MI7 agent), which further reinforces trying every piece of evidence you’ve got as a legitimate tactic – hardly something a professional online investigator would do or the kind of thing that helps a video game create a feeling of engagement or empowerment in its player. 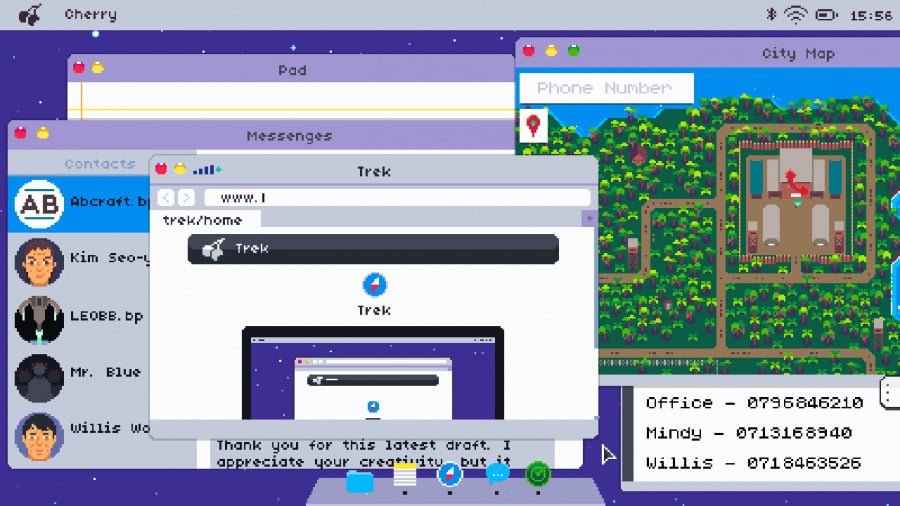 There are occasional divergences from this samey setup; we enjoyed watching suspects get tailed around a city on a little pixel version of Google Maps for example, but for the most part, it’s all quite tedious stuff and it’s exacerbated to no end by the terrible controls on Switch. The most important tool at your disposal in Mainlining is your keyboard and it’s represented here by a virtual version on your Switch’s screen which can be interacted with via extremely fiddly pushes of shoulder buttons and thumbsticks, or using the touch screen (the latter being our preferred, but still very clunky, method of input).

The problem with this setup for Switch users is that having an onscreen keyboard means almost everything else is constantly being obscured, including any typos that you make, and you’ll make plenty due to your big human fingers banging on tiny onscreen keys. You’ll soon find yourself loathing the idea of having to key in information, which is a pretty big problem in a game all about keying in information. It also takes away entirely from the central novelty of the game, feeling like you’re tinkering around on a little pixel recreation of a PC interface. It’s something that suits being played on a PC, where Mainlining was originally released some two years ago, and not forced onto the Switch where the novelty is lost behind frustrating controls; in the end, it’s a rare example of a game that doesn’t really feel as though it should have been transported to Nintendo’s system. 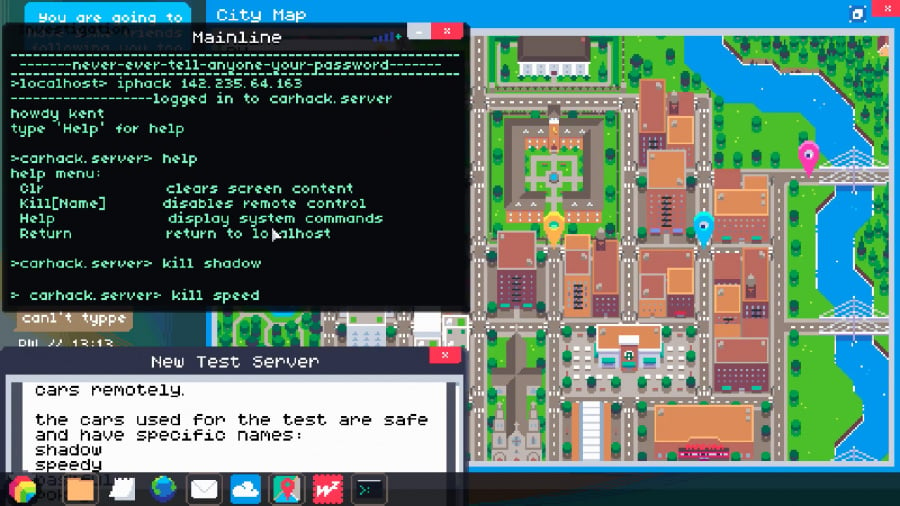 There are other problems with Mainlining; little typos and errors in information here and there that’ll have you scratching your head thinking you’ve missed something until you realise it’s a mistake on the developer’s part, as well as things like a notepad that deletes all your precious detective work when you close it down and open it again – not ideal. All of this adds up to a game that, even if it were being played on a PC, just doesn’t really manage to achieve anything it sets out to.

Mainlining fails to really provide any interesting commentary on its chosen subject matter, revelling instead in caricatures we’ve all experienced a hundred times before; stuff you’ll have seen done better in any Grand Theft Auto game that has parody websites involved. Its gameplay too often degenerates into trial-and-error and lacks any sort of consequences for the player getting things wrong, which renders the whole investigative process pretty much pointless. On Switch these problems are married to a control system which is, in short, terrible, and will likely see you reaching for the off switch long before you’ve reached the end of your investigations.