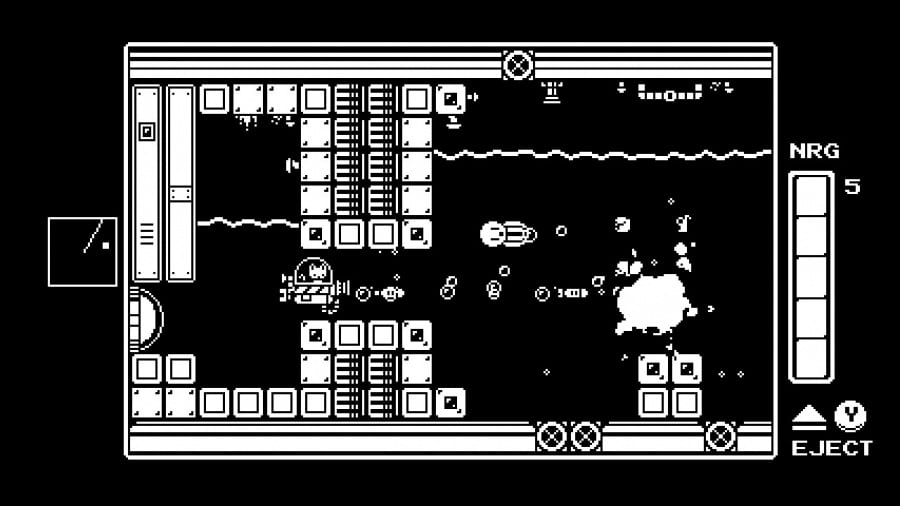 Cats are remarkable creatures, aren’t they? One moment they could be curled up on your lap, peacefully dozing the day away, and the next they’re donning a high-tech mecha suit and exploring vast caverns filled with monstrous creatures. At least, that’s what Gato Roboto – Doinksoft’s charming ‘Metroidvania’ – would have you believe. Joining the ranks of the Switch’s superb range of Metroidvania titles – including Hollow Knight, The Messenger and Axiom Verge – Gato Roboto is a minimal, faithful homage to Samus’s own Metroid series whilst also managing to project its own unique voice.

Gato Roboto stars Kiki, an adorable kitten who finds herself lost and alone on a dangerous alien planet after her owner crash lands a spaceship and is subsequently trapped within its wreckage. Kiki must investigate her surroundings and free her master, all the while ensuring her own survival against the planet’s various hazards. As you might expect, with a tiny frame and even tinier paws, Kiki is no match for the fearsome beasts that roam the land, and has no way of defending herself. Thankfully though, it’s not long before Kiki discovers a handy mech suit, somehow perfectly crafted for our heroic feline. 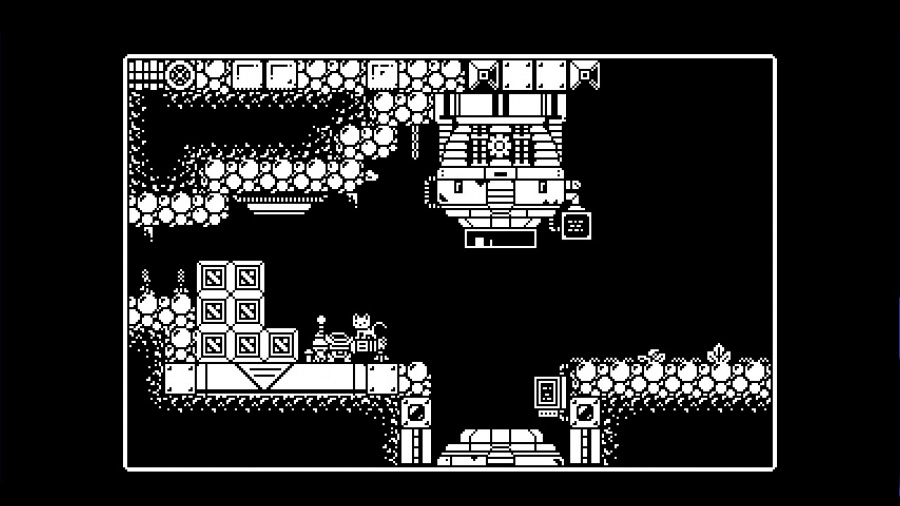 Whilst within the suit, Gato Roboto plays very much like a Metroid game. You have a basic arm cannon with limited range but decent rate of fire which will serve as your primary means of attack. Movement within the suit is straightforward and surprisingly slick – you’ll soon be running and leaping through the environment with ease and, especially considering the low cost of entry, it feels spectacular.

Unique to Gato Roboto is the ability to exit from the suit at anytime you see fit. This is particularly useful for accessing tight spaces that only Kiki herself could possibly fit through. More often than not, these will lead to secret passages containing collectables or health upgrades. You need to be careful during these moments, however, as Kiki will die with just one hit, so make sure your suit is never too far away.

You’re not only confined to one suit, either. At frequent points during Gato Roboto, you’ll come across bodies of water which you’ll need to swim through. Of course, Kiki is not adverse to swimming and can do this without any suit at all, but much like on land will be completely vulnerable to attack. This is where the game’s second suit comes into play – it acts very much like a submarine, providing protection to Kiki whilst allowing her to fire underwater torpedoes at her enemies. The controls here are naturally a bit more cumbersome than on land, so you may take a few hits before you get used to how it moves. Overall, however, switching between suits is pretty seamless for the most part. 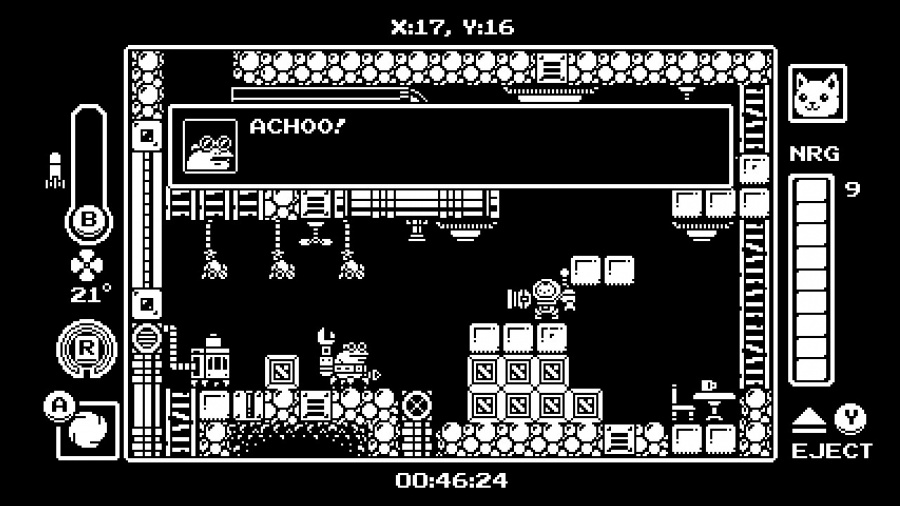 As you might expect with a Metroidvania title, Kiki is able to obtain new weapons and abilities as she progresses through the environment. The first of these is a powerful missile which, unlike the Metroid games, has an unlimited supply. Despite this, you can only fire two or three in one go before it overloads, at which point you’ll need to wait a few seconds before firing another. The actual act of firing them, however, is remarkably satisfying and will actually force Kiki backwards, so you’ll have to be careful not to stand on the edge of a lava pit as you fire!

Other upgrades include a spin attack – which is essentially a double jump move that also acts as a secondary weapon – and a dash move that allows Kiki to effectively teleport through dangerous hazards such as falling lava or enemy projectiles. Naturally, a lot of routes in the game’s map are locked off until you gain certain new abilities, but the game does a fantastic job of introducing new weapons and abilities at a gradual rate, allowing you ample time to get used to one new mechanic before moving onto the next.

Although the game is not graphically intensive in any way, it has a wonderful minimal visual style that works perfectly in both docked and handheld modes. As you progress through the game, you’ll also come across secret collectibles known as ‘cartridges’ – activating these within the game’s menu will apply a colour filter to the game, so if you want it to look like a Game Boy game, then go right ahead. It’s a nice little touch, but we found ourselves quite content with the default filter for the most part. 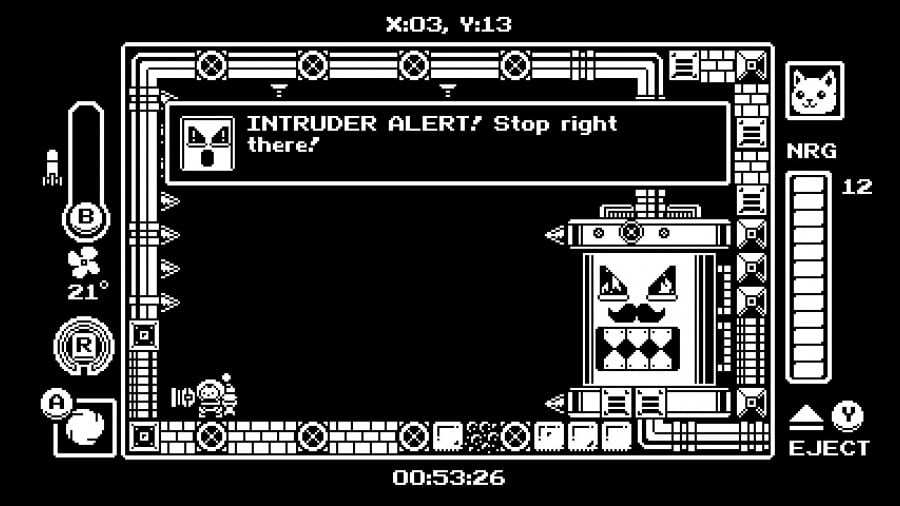 Our only real gripe with Gato Roboto is its overall difficulty. Most players will fly through the game in just a few short hours with ease. The only grief you’ll likely face is from the boss battles which, although punishing at times, are nevertheless thrilling and amusing in equal measure. Still, at such a reasonable price, it still feels like a no-brainer. Gato Roboto is a lovingly crafted Metroidvania that can stand proud next to its forebears.

With tight controls, retro-styled minimal art style and a superb sense of progression, this is the perfect Metroidvania to play whilst you’re waiting for an actual Metroid or appropriate Castlevania game. Only its difficulty leaves a bit to be desired at times – anybody with a lick of experience will likely breeze through it in no time, and we wish it lasted a little longer. Nevertheless, it’s chock full of meaningful upgrades, secrets and spectacular boss battles to keep you busy, if only for a few hours.