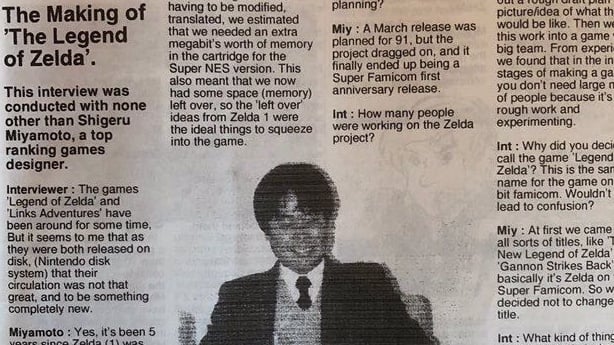 Retro gamer Matt Sephton, who goes by the handle @gingerbeardman over on Twitter, has shared a forgotten interview with us dating back to 1992. It’s from issue 25 of the publication Electric Brain and features the one and only Shigeru Miyamoto talking about the development of The Legend of Zelda: A Link To The Past and the first two entries on the NES.

Throughout the interview, Miyamoto speaks about the various challenges and design choices the company faced during the development – such as trying to cram all of the game’s data onto the cartridge – and also explained how the company managed projects by starting out with only a handful of people. He even mentions how the developers had “all sorts of titles” for the SNES Zelda, like “Gannon Strikes Back” until a decision was made to stick with the original name.

In the second half of the interview, Shigeru touches on the role-playing genre in general and states how Zelda paved the way – with a number of original ideas that eventually became “bog standard” for all games under this banner. Later on, he even makes a reference to the original Mother (Earthbound) game on the NES and Pilotwings.

One of the final questions is about future production plans for the company. Miyamoto follows this up by saying how Nintendo “will never run out of ideas” and new genres can be easily created. Read the full interview below:

PLAYSTATION 5 UK re-stock is in full swing, as retailers like GAME and Currys open up orders for the

CYBERPUNK 2077 fans are counting down to the brand new patch, which should fix some of the more pres

FIFA 21 TOTY is getting released soon. Here's what you need to know about the release date, sta

PS5 and Xbox Series X stock returns to Gamestop in the United States today, after the recent updates

FIFA 21 will soon let you track and set limits on...