From now until the end of 2019 we’ll be celebrating the coming year by looking back and republishing some of our finest features from the past twelve months, in addition to our regular output. This article first appeared on the site back in September. Enjoy!

Nintendo’s history as a manufacturer of playing cards and toys means the company has always been very comfortable with expanding out from with video game console under the TV into the wider world of peripheral accessories and novelties. These extra lumps of plastic and electronics that interface with your system can be wonderful, strange, utterly confounding or any mixture of the three and we certainly haven’t seen the last of them.

These bulky bits and pieces are often linked to a very specific game or experience and can be a nightmare when it comes to storage. Many people will have Rock Band guitars and drum kits wedged down the sides of wardrobes, but they evoke great memories even if you haven’t used them in years and it takes a strong mind to throw them out. There’s also a dangerous allure to many classic peripherals – even if we know that they’re impractical or downright useless, you can’t just get rid of them!

Today we’re going to take a look at just some of the most alluring peripheral gadgets to release for Nintendo consoles through the years, whether first-party or officially licensed products. Below are a collection of thirty (plus a bunch of others we mention in passing) that run the gamut from excellent to… unimaginably awful.

We’ve stuck to things that actually saw release (so, sorry Wii Vitality Sensor and NES Knitting Machine) and we’ve also skipped big add-on peripherals with their own software media (your Famicom Disk Systems, Satellaviews, 64DDs and the like) – we’ll look that them another time. So push your pad into your NES Speedboard, don your Power Glove and Konami Laserscope and prepare to play it unnecessarily loud…

Let’s kick things off with an alternative controller for the Nintendo Entertainment System. The original NES pad is a design classic, but looking past the nostalgia and brilliant individual components, that rectangular casing could hardly be called ergonomic. The NES Max featured a shape well ahead of its time and added two turbo buttons to the standard ‘B’ and ‘A’. Perhaps less welcome is its ‘cycloid’ pad, a D-pad alternative where you slide a floating red disc around and apply pressure like the regular input. It’s not necessarily worse than the now-standard D-pad, it’s just needlessly different and certainly not an improvement.

There was no shortage of controller alternatives for the NES, including the NES Advantage (famously used by the Ghostbusters to control the Statue of Liberty as they fought to save NYC from Vigo the Carpathian). Some were half-decent, some were nigh-on unusable. The next entry is an example of the latter…

Brøderbund’s U-Force looked for all the world like some sort of advanced laser cutting device when set up. It folded up like a mini briefcase or a bulky laptop when not in use, but once set up the two ‘screens’ used IR sensors to detect players’ motion without the need to physically touch anything. Nifty in theory, although it was notoriously awful at registering inputs, which neutered the whole (arguably pointless) concept.

Perhaps Brøderbund were thinking of accessibility with the U-Force. Unfortunately the tech just wasn’t reliable enough, so the most fun you could have with it was opening it up and pretending it housed the nuclear codes or something. Good in theory, perhaps; pants in practice.

Not a cell phone accessory, the Nintendo Hands Free was an attempt at making video games accessible to players with disabilities or conditions which made operating a standard game pad impossible or impractical. The device strapped to the player’s chest (if required) and a long rod with a chin-pad was used for directional inputs, with the ‘A’ and ‘B’ buttons activated by blowing or sipping on a straw-like tube. With various adjustments available, this was an early and laudable effort to expand the accessibility of video games, and demonstrates that inclusiveness isn’t a recent fad for the company.

Part of the NES Sports Set, and not to be confused with the the Satellaview (the Japan-only SNES add-on) the NES Satellite was a wireless multitap dock enabling up to four people to play compatible games. A wired version – the more well-known NES Four Score – was released later, but despite looking pretty cool, neither one had much use thanks to the limited number of games that supported more than two players. Still, with a copy of R.C. Pro AM II, four friends, a NES Satellite and a clear line of site to the IR receiver, fun would inevitable ensue.

As evidenced by the U-Force, third parties were apparently obsessed with getting the controller out of your hands back in the day, and the NES Speedboard is a much cheaper alternative to Brøderbund’s high-tech, low-success solution. You can’t say Pressman’s Speedboard didn’t work, either – simply slot your NES pad into the board and you’re free to turn your tortured palms over and hammer at the tiny buttons like you were operating a tiny arcade cabinet. Without the joystick. Or the comfort.

Like so many rubbish peripherals, the NES Speedboard solved a problem that no-one had in the first place. It’s an early iteration of all the plastic nonsense to come with the Wii many years later. Check out the video below for some comprehensive analysis:

Arguably the most famous of the NES’ considerable catalogue of accessories, the prominent product placement of the Power Glove in the 1989 Nintendo vehicle The Wizard has given it legendary, meme-worthy status that far exceeds its actual worth or usefulness. The concept of a gaming gauntlet to control your console is dripping with ’80s cool, but like so many NES peripherals, in reality it was unwieldy, inaccurate and a nightmare to use where the standard pad was no-nonsense and reliable.

There would be other glove controllers for other systems, but none carry the cache of the original Power Glove. It’s so bad.

In Japan, the Zapper was essentially a black plastic revolver (Japan also saw other more realistic gun-based accessories like the Bandai Hyper Shot), but the NES peripheral looked more like something a Stormtrooper would have holstered while patrolling Mos Eisley. A change to US law led to the red/orange version pictured above that further removed it from the realm of actual firearms. 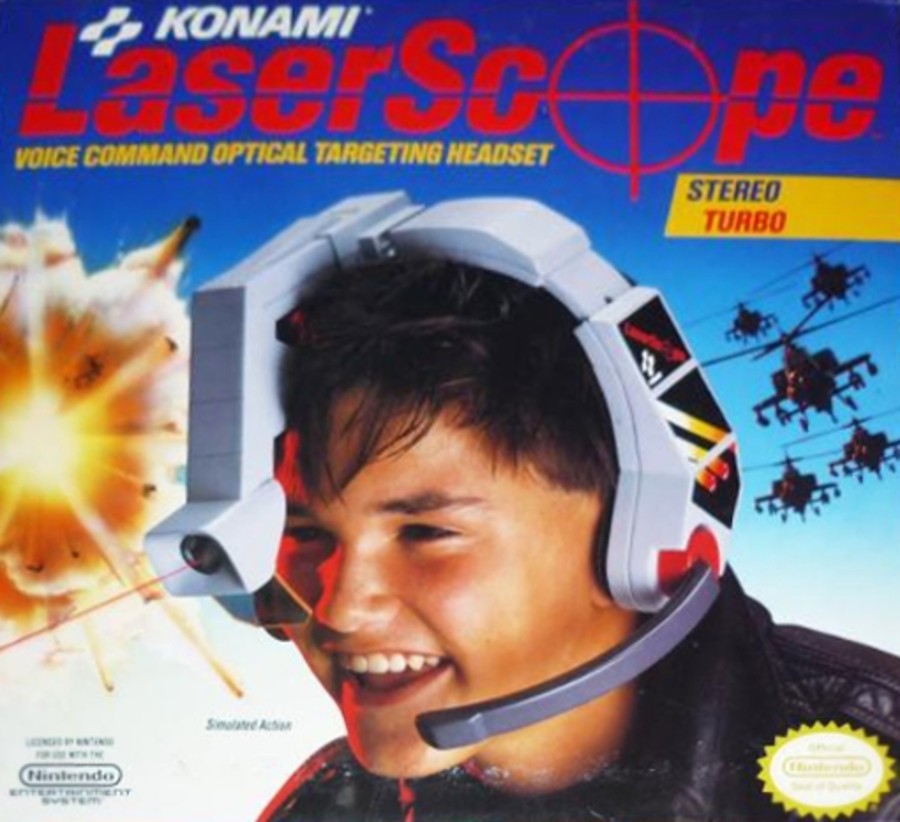 We’d be remiss not to mention Konami’s head-mounted, voice-activated Laserscope, too – it might not have worked much better than the U-Force, but back in the day it was a great finishing touch to your Metal Gear cosplay. In the next generation Nintendo’s own Super Scope (yes, we’ll get to that) was joined by Konami’s chunky, more traditional Justifier, but there’s something about the sleek lines of the Zapper that makes it the first thing that pops into our heads when someone mentions lightguns.

For anybody without a trusty CRT telly, the Zapper is now little more than an ornament – as with all lightguns of the era, modern TVs don’t speak their language. Therefore, games like Duck Hunt and Wild Gunman sit unplayed on the shelf. However, its legacy lives on as the N-ZAP ’85 and ’89 in Splatoon 2, and we’ve had younger relatives get very excited at seeing the genuine article amongst our retro gaming kit. The lacklustre plastic of the Wii Zapper doesn’t come close.

R.O.B. is arguably the premier accessory for retro gamers building a NES collection because…, well look at him! With Short Circuit doing the rounds in cinemas in 1986, any kid with a NES obviously wanted to add Johnny 5’s little brother to their gaming line up. Not only was he cool-looking, but he’s also necessary if you want to play Gyromite and Stack-Up, the only two games released that made use of him.

Those two games both came with more plastic accessories to use as you commanded the little guy to lift blocks or press buttons while he interfaced with both the screen and the control pad. Unfortunately, the novelty of watching your Robotic Operating Buddy performing operations with a success rate below 100% quickly wore off, but that hasn’t stopped him assuming legendary status in the Nintendo firmament.

Thanks to appearances in various games including Smash Bros., he’s become an icon despite being a bit rubbish, and a prize for serious collectors willing to pay a pretty penny. The rest of us have to make do with his cute amiibo sitting next to our NES Mini Classics.

A one-handed controller might be useful for people who only have the use of a single hand, or if you fancy having a slice of pizza or a beverage on the go while you’re gaming. The ASCII Stick Super L5 had buttons on the back and a rotating faceplate to make it as comfortable and user-friendly as possible, although that’s not saying much. Still it’s another example of making gaming accessible and at least it looks cute. The video below gives you a very brief look at the pad:

Slapping ‘Super’ on the front of everything on SNES was a tried and tested naming convention for games, and it also worked well enough for updated versions of accessories. Guess what they called the SNES version of the Advantage stick?

Still, Nintendo put a tad more effort into naming this hulking great light gun, shunning ‘Super Zapper’ for Super Scope. Its legacy of games might not be any better than the Zapper’s, but it’s a lovely bit of retro kit and you can read all about it in our Hardware Classics feature.