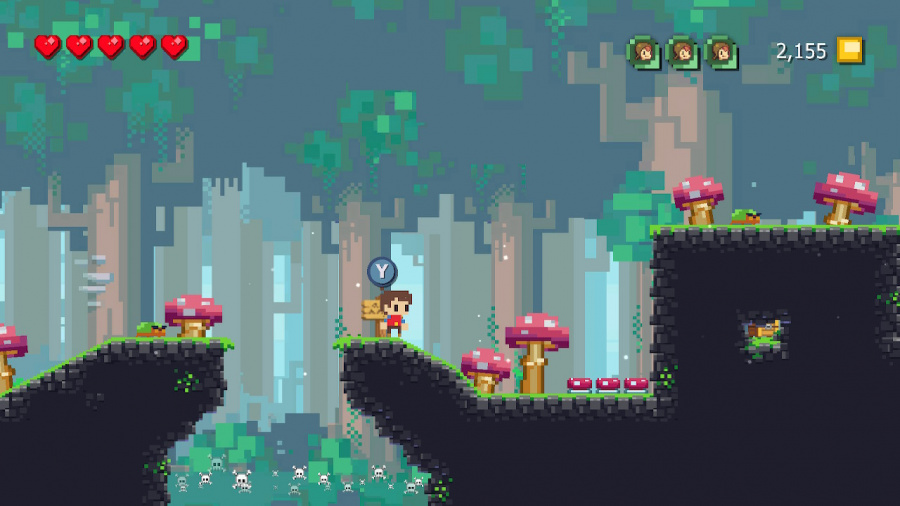 One of the biggest crimes a game can commit is being perfectly average. While, for the most part, there is nothing technically wrong with some games, there is nothing that makes them stand out from the crowd. This is the unfortunate middle ground where Adventures of Pip lies. While the game is a perfectly average 2D platformer, it is a completely unmemorable adventure that does little to make an impact on the player.

Originally releasing on the Wii U in 2013, Adventures of Pip tells the story of an average single pixel who gets caught up in a journey to save the princess of the kingdom, Princess Adeline. The princess is kidnapped by the evil queen, aptly named Queen DeRezzia, who aims to turn the entire world into a single bit, giving her the ability to take control of the world.

What sets the plot apart, however, is the not-so-subtle hints of a class structure within the land. Those with a higher bit count have an elevated place in society and constantly talk down to those who are made of 8 or 1-bit. Throughout the game, Pip is constantly patronized by the rest of the cast for being made of only one bit, even though he is the hero of the story. At one point, a group of knights even drop Pip down into the sewers just because of his bit count.

Overall, Adventures of Pip makes the biggest mistake a game can make: being boring. While the game had a lot of potential, it is brought down by being unmemorable. A great soundtrack cannot justify bland level design, a restrictive bit-switching gimmick, and a lacklustre story. There are far more imaginative and innovative platformers on Switch that deserve a look over this.

How to get and upgrade the Sideways Minigun and Sideways Rifle explained • Eurogamer.net

Destiny 2 Xur location: Where is Xur today? What is he selling this week?

DESTINY 2 fans want to know where is Xur what he will be selling this weekend before the next big reset. [...]

MICROSOFT has added more free games for its subscribers to play on their Xbox One and Xbox Series X consoles this weekend. [...]

THE big Hearth and Home update is finally available to download in Valheim today, and you can read about all the significant changes in the official patch notes. [...]

How to get and upgrade the Sideways Minigun and Sideways Rifle...

Call Of Duty Season 6: Haunting Of Verdansk Event Gives Us...

Modern Warfare’s new gun is so broken it makes you look...