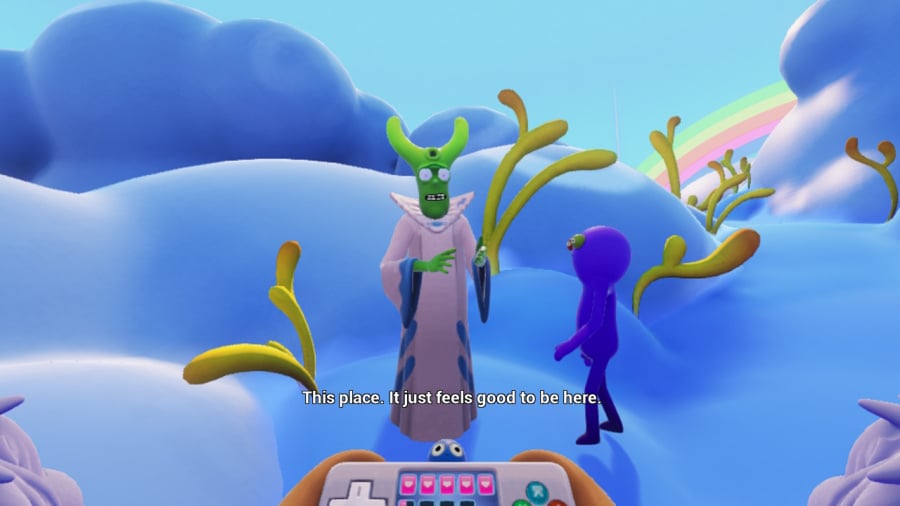 Fresh from the studios of Squanch Games and the brainchild of Rick & Morty co-creator Justin Roiland, Trover Saves the Universe has made a somewhat surprising appearance on the Nintendo Switch. Does it capture everything that made Rick & Morty so hilarious? Do you need a high IQ to understand this game? Let’s see, shall we?

Those of you who are fans of Rick & Morty (and this reviewer will confess to being only a very recent convert) will know exactly what to expect from this game, quite frankly. For the uninitiated, however, the show is famous for its bizarre, off-the-wall and dark humour with an intentionally sloppy and often ad-libbed delivery, and that is exactly what you get here. It almost feels like it could be Rick & Morty: The Game at times. This might not be a game you’d want to play around your grandma, however, as it certainly doesn’t hold back with the swearing, and the sheer amount of profanities is often key to the humour. Make no mistake, this isn’t a kids game, despite what a cursory glance at the screenshots might suggest. 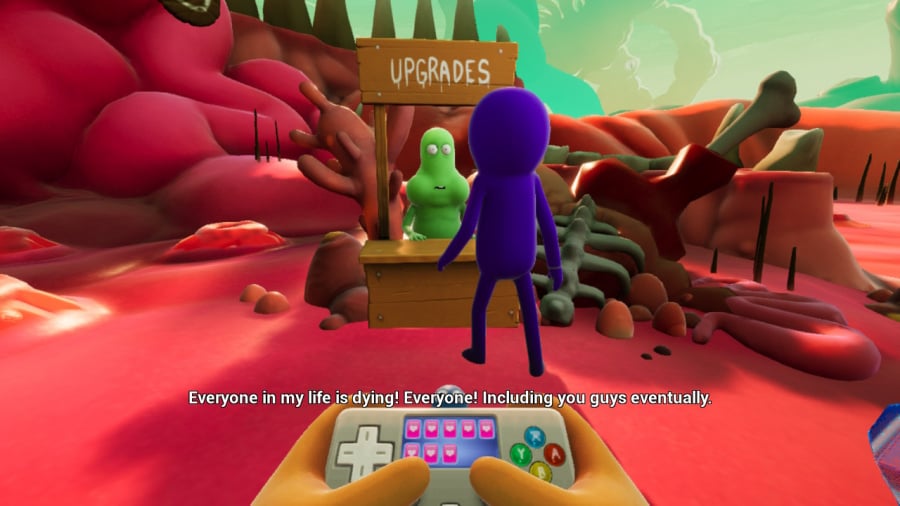 Humour is, of course, highly subjective – and Rick & Morty’s particular brand is might not be for everyone (especially if you have a low IQ, supposedly). Thankfully, this game is much more than just jokes and profanities – it’s also a blast to play. At its heart, what we have here is a puzzle-platformer. You can jump, you can hit things (in this case, with a lightsaber – yes, lightsaber), general gameplay involves either fighting enemies or solving puzzles, you gradually unlock abilities along the way, and have to collect plenty of items (in this case, coloured babies) along the way. So far, so Banjo-Kazooie, then. There’s a twist, however, and this is where things get complicated.

Even if you knew nothing else about Trover Saves The Universe, it’s painfully clear as soon as you start that it was designed for VR. Squanch Games focuses heavily on VR as a studio, and this outing was primarily developed with PlayStation VR in mind. It didn’t require VR per say, but it is evident that most of the game’s mechanics are designed with immersive virtual reality as the prime consideration.

So, how well does it make the transition to the Nintendo Switch? We’re delighted to report that it works very well indeed. Much of this comes down to the fact that this is still fundamentally a 3D puzzle platformer, so the core mechanics essentially remain unchanged regardless of how you’re viewing things. You see, Trover Saves The Universe actually has two lead protagonists. You play as the titular Trover, a purple humanoid who you control throughout the game. However, you actually view the action through the eyes of a ‘chairopian’, a member of a chair-bound race of people who lack the ability to move on their own accord. 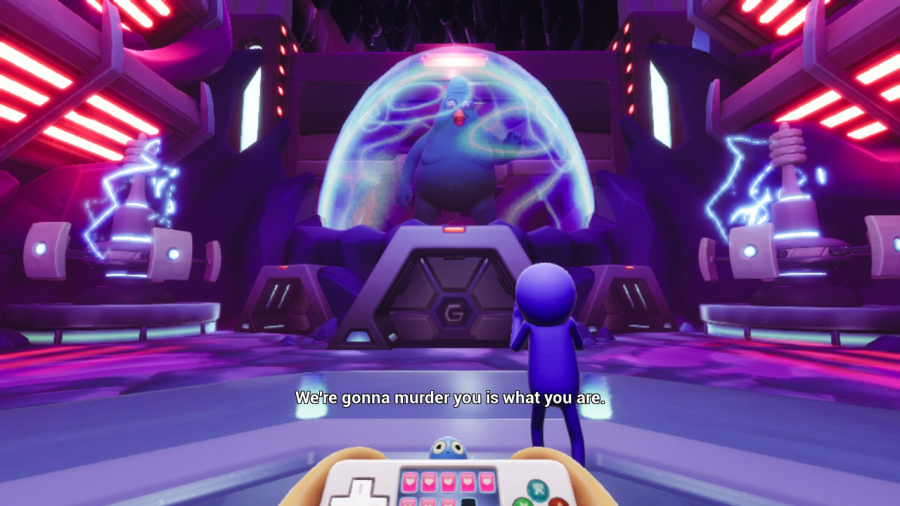 This is presumably a mechanic designed to overcome some of the limitations associated with movement in VR and sounds cumbersome on paper, but in reality, it actually works surprisingly well. Not only does it add an interesting twist to the otherwise-familiar platforming gameplay, but also means that your view becomes even more vital to seeing where you need to progress to, spotting the important collectable coloured babies, and generally making progress throughout the stage much more visible.

We said that the chairopian is stationary, but we actually lied – they can somehow move up and down into the air. This helps give a much clearer view of the play area, and is essential during combat since it allows you to see enemies across the area and any who may be attacking you from a distance – some enemies have ranged attacks and will use them excessively. Speaking of combat, your primary method of attack is using your aforementioned “don’t-sue-me-Disney” lightsaber as well as being able to jump. Without wanting to spoil too much, players will gradually unlock other ways to attack using said lightsaber, as well as mechanics to grab and throw things, which help with both ranged combat as well as solving puzzles. 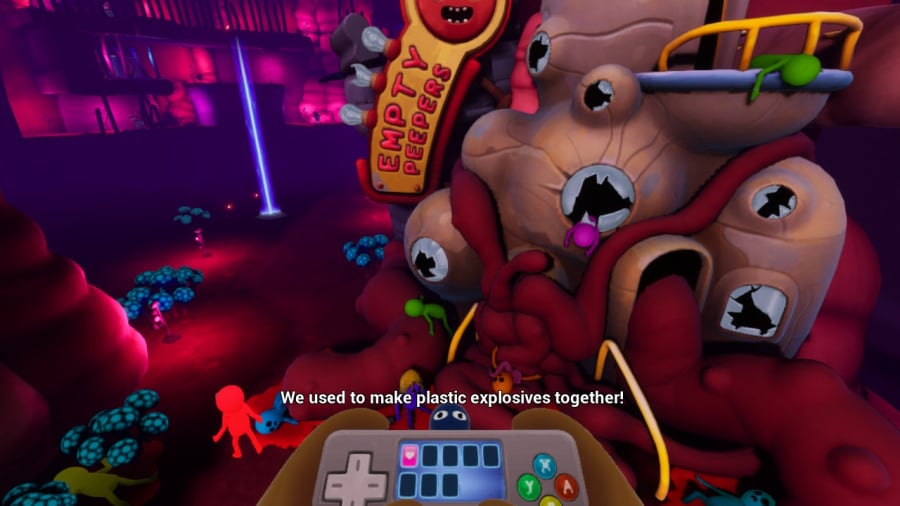 The structure of the game is pretty standard fare. After the chairopian’s dogs are stolen and inserted into the eyes of the villainous Glorkon, the chairopian teams up with Trover. Both Trover and the chairopian happen to have complementary skill sets, with neither character able to move by themselves without the aid of the other, and thus form a friendship out of necessity. The duo travel from world to world in their ship to a variety of different terrains, with missions usually involving committing involuntary mass murder and upsetting plenty of people along the way.

The characters you meet are irritating by design, meaning that their subsequent fates feel somewhat less tragic. Each world has a good balance of combat and puzzles, neither of which are particularly challenging but enough to be fun and engaging. Worlds are generally completable in a single sitting, and the game features an insanely generous checkpoint system meaning most players will breeze through them pretty quickly. In fact, the game itself winds up being pretty brief, with only a handful of worlds until you reach its conclusion. This isn’t necessarily a bad thing since the journey comes to an end before the whole thing outstays its welcome. The gameplay isn’t exactly the most nuanced in the world, but the ride is still a blast while it lasts. 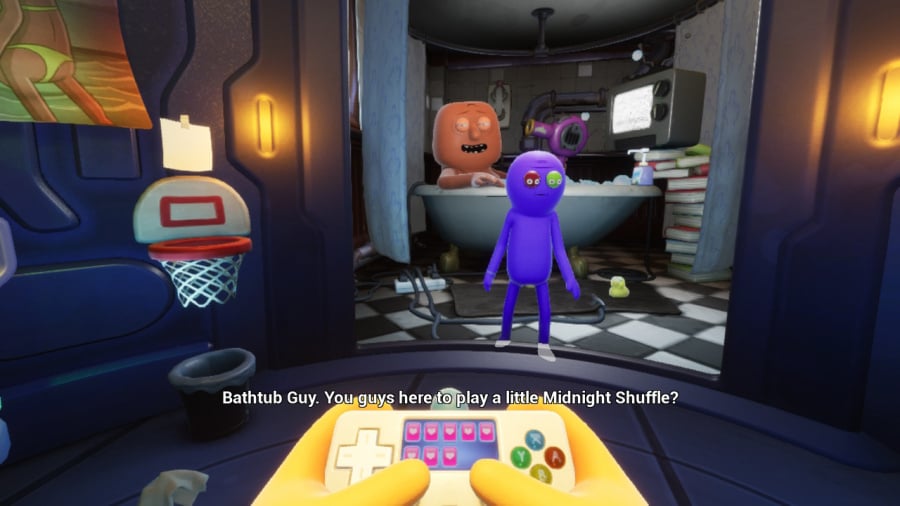 While the game plays extremely well despite the lack of VR, this is one game which would have benefitted massively from gyroscopic aiming. The right analogue stick is generally a good replacement for head tracking, but the character’s perspective being based around VR means that there were numerous occasions where we expected gyroscopic aiming to be present and instinctively attempted to aim using it.

It can be a little cumbersome to use the analogue stick for more precise movements to, for example, pick up hidden coloured babies or to grab and throw objects. This is also another Unreal Engine 4 game suffering from frustratingly small text sizes at times, a common issue amongst games this generation. Some adjustments to aid readability from a distance would be greatly appreciated, especially when the dynamic resolution can affect the text at times in handheld mode.

Trover Saves the Universe is a surprisingly fun little game. The humour will not be to everybody’s tastes, and while the core gameplay is extremely strong by itself, your appreciation for their style of comedy will ultimately determine whether or not you see this one through to the end. But for us, this was a hilarious twist on the puzzle-platformer genre which we can highly recommend for anybody looking for something a bit more weird and twisted.