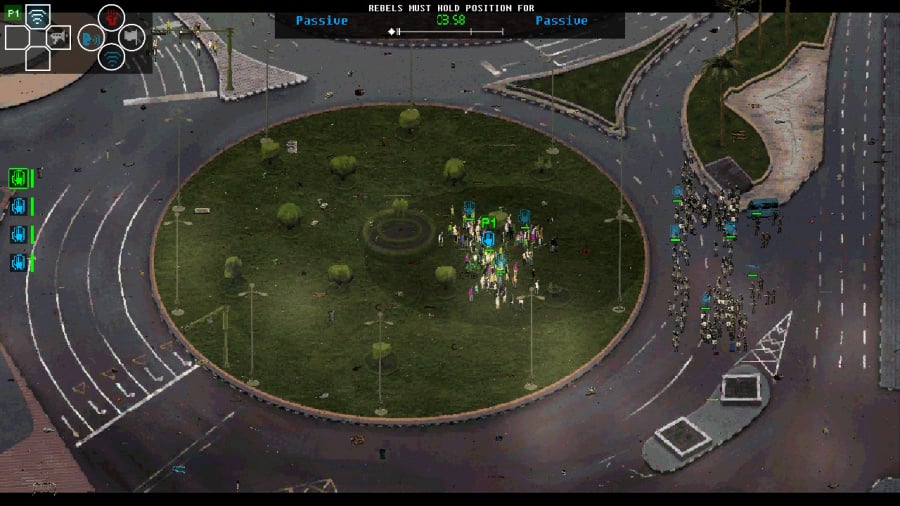 Ah, the strategy game. Once a stalwart of the PC gaming scene, the genre has bloomed on console in recent years as developers re-approach the genre in new and exciting ways. And it’s those titles that break away from the traditional military concept that’s gripped its mechanics for so long, taking the principles of an RTS and applying them in ways we’ve never seen. RIOT – Civil Unrest does just that, but while its pixel art revolutions look the part, the game itself simplifies itself too far and loses some of the control that makes an RTS so exciting to play.

On paper, the concept is certainly bursting with potential. Based on real-life riots and incidents of civil unrest that occurred across the world in recent years, you’ll either choose the side of the mob or the police. Whichever side you choose, you’ll need to meet a key objective or set of challenges before a timer runs out. Both sides differ in their options, making for some oddly uneven encounters. The police are usually smaller in number, but have key divisions for use in certain scenarios. Some have shields for driving back protesters, others have batons for when things get tasty or tear gas for quick crowd dispersion. 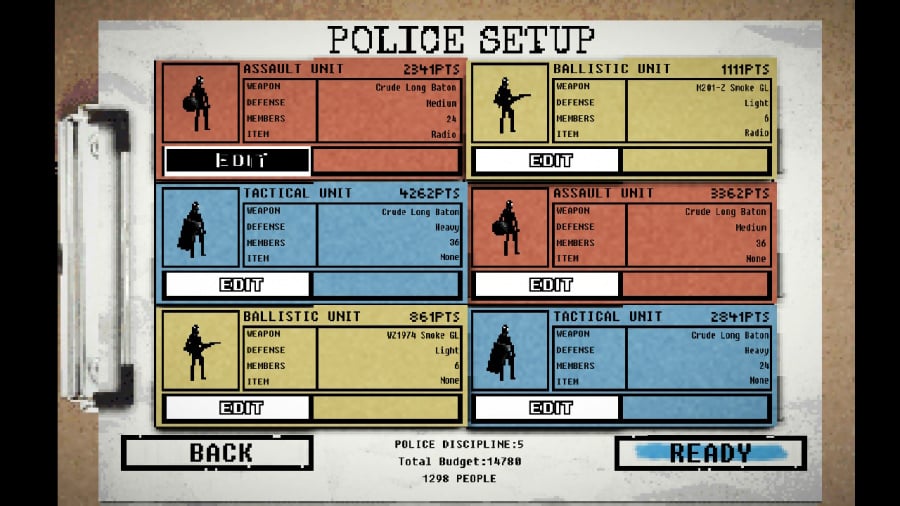 The mob, on the other hand, doesn’t have as many clearly defined roles. Instead, you get to control a much larger mass of human defiance divided into smaller manageable groups. More often than not, success while playing as the side of protest usually boils down to micromanaging each group so a large enough number of people are hindering the progress of the police. For instance, to protect a series of tents from being smashed to pieces, you’ll need to use each group to systematically force the fuzz into a tiny retreat. Each scenario is very much a to-and-fro affair, with gains and losses being constantly traded.

Preparation between the two sides also differs. For the police, choosing to equip certain units with particular gear will affect their usefulness in the field; for instance, giving heavy shield-toting coppers a radio (for gathering all available units to their location) is a far better fit than a gas canister. However, on the flip-side, the things you choose to take into a protest could potentially affect how many people actually turn out to join you. If you start packing weapons and other aggressive forms of expression, then the potential for violence will likely put some passive protesters off. It’s the little aspects such as these that show, however frustratingly, just how rich in potential RIOT really is. 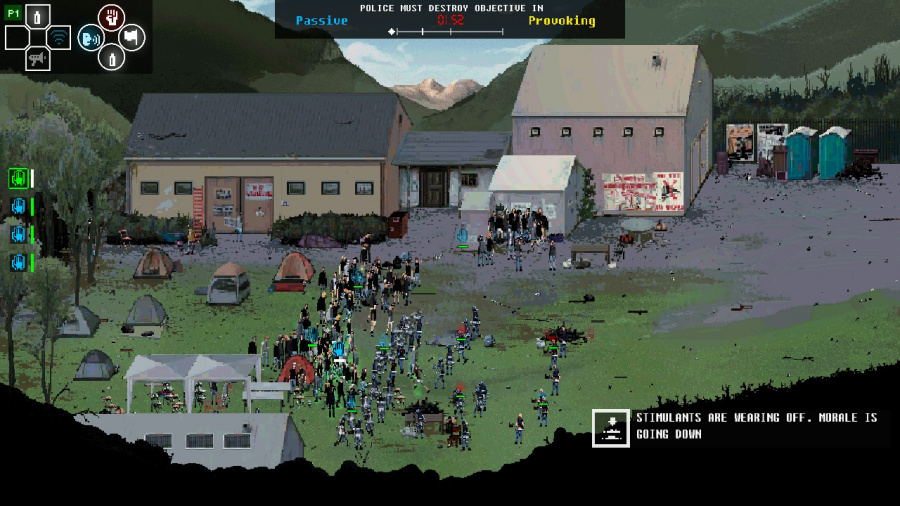 The problem comes in the execution. Whichever of the three modes on offer you choose to play – Global (a setup that compares your performance in each scenario and adds into a leaderboard for both protesters and police), Story (specific missions based on real-life events) and Versus (two-player, split-Joy-Con affair using missions unlocked in Story mode) – you soon start to see how RIOT’s execution struggles to live up to its concept.

The lack of precise control is central to the issue. Yes, a mob of protesters – whether passive or aggressive – is meant to be unruly and nebulous by design, but there’s no attempt to mesh this with the precise tactical agency one associates with an RTS. You can cycle between defined units by pressing ‘L’ and ‘R’, then use the left analog stick to pull them in a particular direction. Movement is sluggish and too often our groups broke apart (even without coming into contact with a unit from the other side). Without support for touchscreen controls – something that would have suited the top-down unit dragging mechanics – managing your protest/police response never truly feels responsive, and that goes a long way to undoing the developer’s good work. 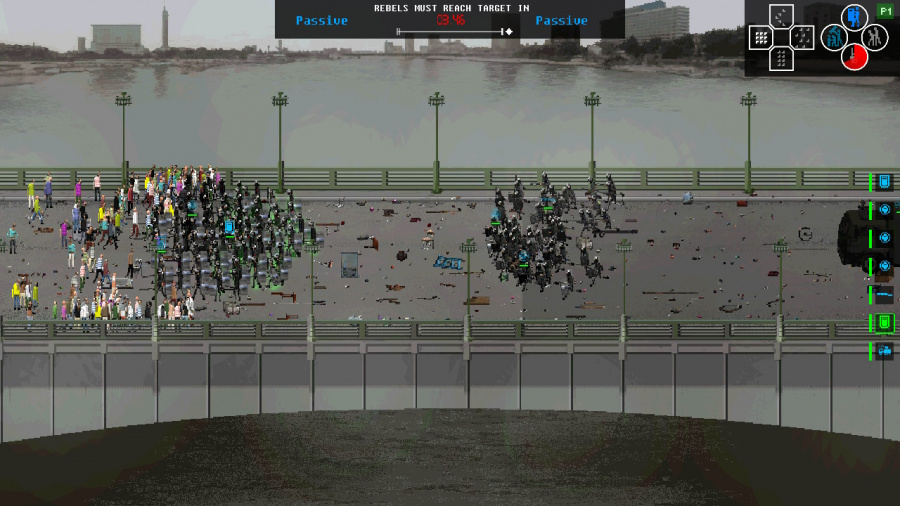 The variety of challenges and objectives in a given scenario to help add a little spice to proceedings – such as keeping protesters from controlling a key area or forcing your way past armed officers on a narrow bridge. Little messages pop up on-screen occasionally to add a little extra drama to proceedings, which is in turn reflected in the mood of either side. Start arresting too many protesters while they’re being passive yet pushy and you could send them into a full-on riot, for example. All of these systems have so much potential, but much of it never does enough with that potential to create something truly unique in the RTS genre.

The lack of a proper tutorial is another black mark against the game; while it’s just about possible to muddle through if you’re familiar with the RTS genre, a clearly defined mode which explains RIOT’s many systems and mechanics would make things easier to stomach – even if it wouldn’t necessarily solve the title’s other problems.

RIOT – Civil Unrest could have been something special, but its move to Nintendo Switch from other platforms hasn’t seen that potential embraced any further. The lack of touchscreen support and the absence of a proper tutorial mode are odd decisions considering how difficult it can be to follow the action when playing in handheld/tabletop mode. Even its use of real-life clashes between protesters and police fails to bring anything insightful or interesting to the table. Sadly, this riot is already fizzling out.