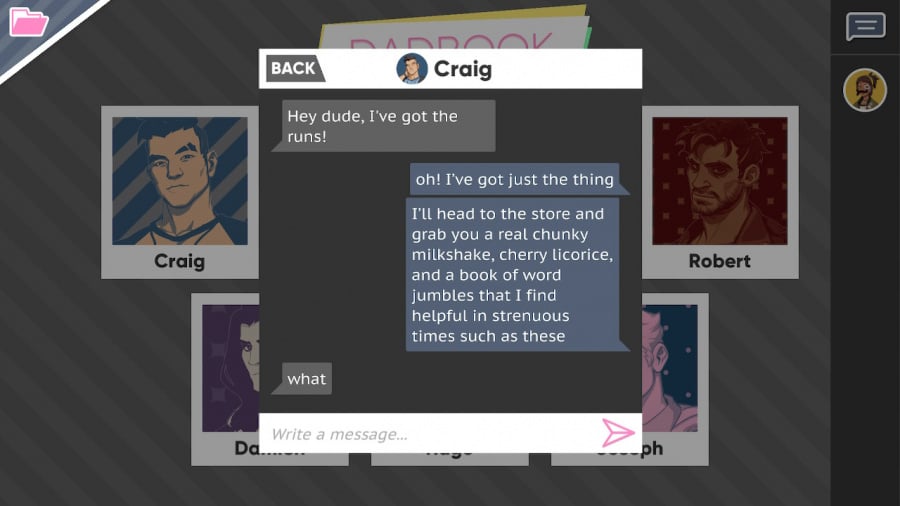 Coming from the Game Grumps’ development studio, you play a single dad moving to a new neighbourhood on the other side of the city. While packing you reminisce over some old pictures with your daughter, Amanda (and fill in some background details with a few dialogue choices). The banter between you and the 18-year-old quickly sets the scene and from the very beginning the writing is brilliant; dialogue is recognisable real, peppered with wit and an easy-going charm that whips up an instant rapport that carries through the entire game. 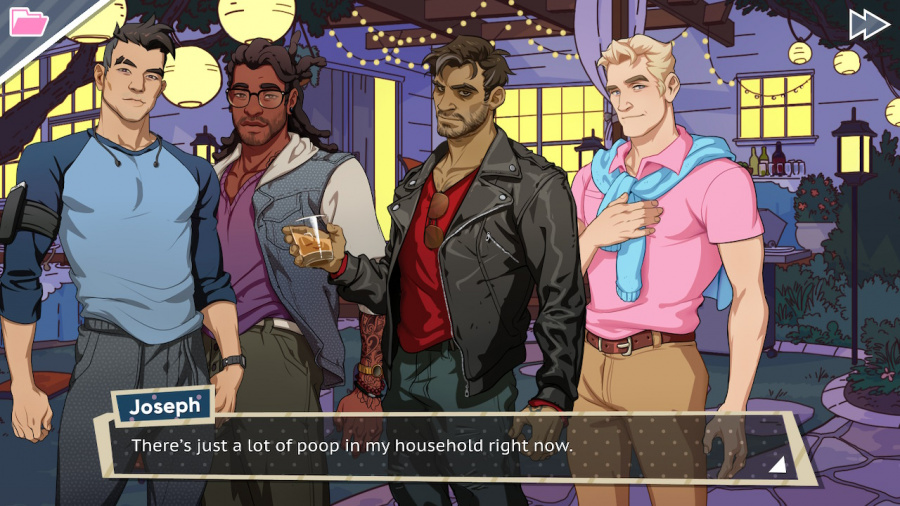 You create and name your dad in an editor – a receding blonde hairline stuck out on the ‘Hair’ tab, so we crafted a Simon Pegg-alike named Tim. You play a loving father endearingly close to being cool, although hapless when it comes to technology. You’re a strictly ‘punk-and-prog-rock’ analogue kind of guy, so while your easy-going fatherly skills mean you have a great relationship with your daughter, you’re clueless when it comes to the digital age, social networks, memes and the like.

Upon arriving at your new place, you bump into a handful of neighbours, all (coincidentally) hot dads. All the residents of the cul de sac keep in touch on Dadbook, a dads-only social network where fathers share interests, advice and chat about dad things (cheapest places to fill up the tank, Top 5 Sean Connery films – stuff like that). After Amanda gives you a hand filling out your profile, you’re free to message the dads you want to hang out with.

Throughout the game, you go on three ‘dates’, although these encounters usually involve other people and take place at various venues at all times of the day. They’re not all ‘romantic’, per se, and often involve simply hanging out and chatting. Dialogue options enable you to shape the conversation but they’re not as regular or intrusive as you might expect and you’ll spend a lot of time simply tapping through text boxes. While that might sound like a negative, the writing makes it an utter joy and we happily read through reams of text. A fast-forward button on ‘R’ enables you to skip to the end, but to do so would be to miss the point of the game. 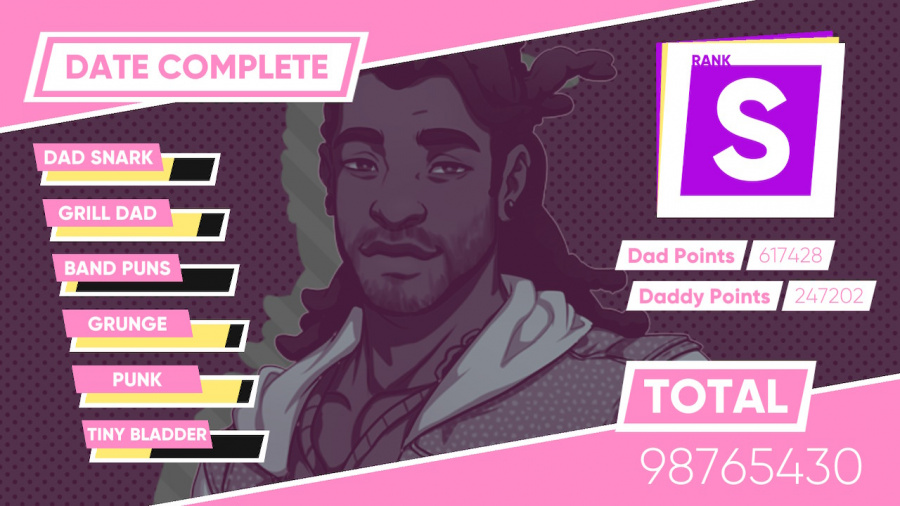 And the writing is the point of the game. Romancing hot dads and adding notches to the bedpost might seem to be the point from the outside, but Dream Daddy is really about the father-daughter relationship and how being a parent impacts the lives of each and every one of the ‘daddies’. Yes, the romance options are there, but anyone expecting a salacious male-only dating sim may be disappointed by its good-naturedness and universal human themes.

The dads are a varied bunch – bad boy, teacher, barista, gym freak, theatrical – and they’ve got a varied skillset: Joseph, local youth minister, is the envy of the cul de sac thanks to his impeccable BBQ-skills; Robert’s stony poker face is equally coveted by the group. They all have hidden depths, though, and there’s lots to uncover about them beyond dad puns and stereotypes. Cool, music-loving dad Mat confesses to being deeply insecure and unsure of himself in company. Hugo, Amanda’s teacher, struggles to balance the authoritarian position imposed by fatherhood (and his profession) with being close to his difficult son. Where other games might bolt these themes onto their stories with a heavy hand, here they’re deftly weaved into the narrative, cropping up naturally in dialogue and never feeling contrived or obvious. 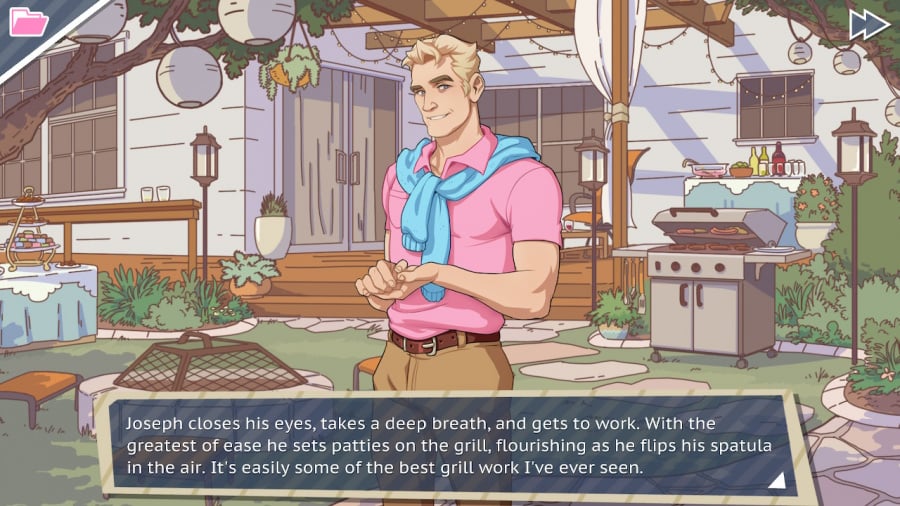 You may not realise it at first, you’re being pseudo-graded on your responses – the game will show you a score screen when a ‘date’ is complete. Just as in real life, you’re going in blind on these dates, unsure what the other dads will respond to. Favourable responses elicit hearts, and if things go well and you continue meeting up with the same dad, you’ll unlock romantic possibilities and achievements.

Short and sweet minigames crop up occasionally (replayable via the main menu once you complete the game). The first we encountered was a Pokémon pastiche as you battle another dad in a game of braggery and daughter-praising one-upmanship. Others have you dodging Youths at a concert while attempting to navigate through a crowd or jogging through a Wuhu Island-esque digital environment on a treadmill at the gym.

With all the dads available, plus the responses and options that you didn’t take, there’s plenty of replayability in Dream Daddy, too. Our first run involved browsing the latest releases at the local record store (Vinyl Fantasy VII, pun fans) with cool dad Mat, but the writing is good enough to warrant at least a second run through. There’ll obviously be repetition outside of the ‘date’ content, but that’s where the fast-forward button comes in handy – you can skip directly to the fresh stuff. 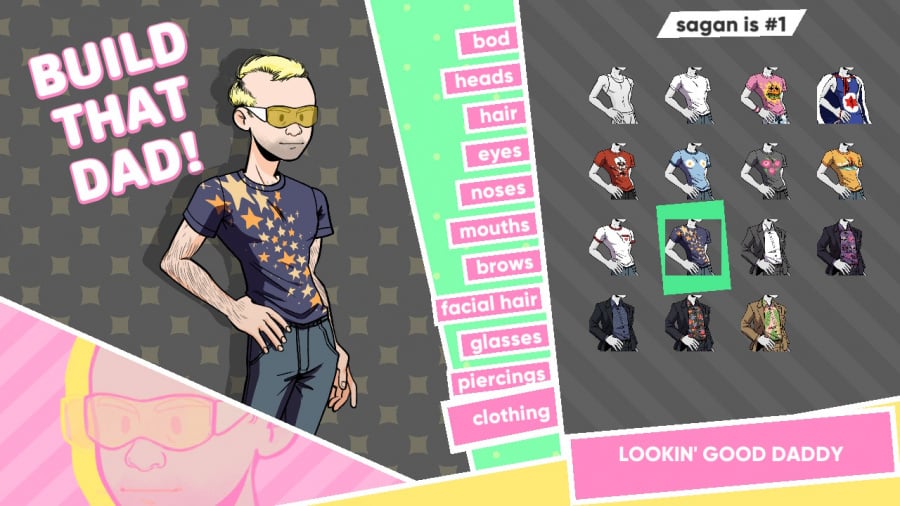 This ‘Dadrector’s Cut’ adds in some side quests and cut content, plus a new minigame. Unfortunately, this Switch version doesn’t include touchscreen support, which feels like a sizeable omission for a visual novel. The game’s clean art style looks fantastic; the portraits and expressions drawn are spot-on and everything really pops on the big (or small) screen.

‘Dad Tips’ pop up during loads and offer a variety of life lessons which had us reaching for the capture button, ranging from general observations (Tip #39: They really stepped up the production value in Episode V) to sound advice (#79: Don’t trust gas station egg sandwiches). Overall, they typify the careful balance the writers strike in Dream Daddy – tapping into the stereotypes and puns of Fatherdom, but also providing an encouraging, life-affirming outlook which permeates the whole experience. Despite the labels, we’re all humans trying to get by the best we can and, as Dad Tip #85 reminds us, we should be generous and kind to everyone.

Heartwarming; that’s the word to describe Dream Daddy. It’s a feelgood game, from its tongue-in-cheek Dream Weaver-esque theme tune to its message of acceptance and generally being excellent to one another. The entire game lives on its writing, which is universally excellent and works on multiple levels whether you’re a parent or the child of one. On the surface it’s a hot dad dating game – the swirly logo font and colourful presentation lean into that – but there’s real heart to the stories here, with textured characters dealing with a multitude of situations life throws at them. If you’re after rock-hard anime abs and mechanics that promise ‘innovative’ use of HD rumble, you may be disappointed with Dream Daddy. For everyone else, it’s a good-natured, good-humoured visual novel with themes of acceptance and love that’ll warm the cockles of the coldest heart.