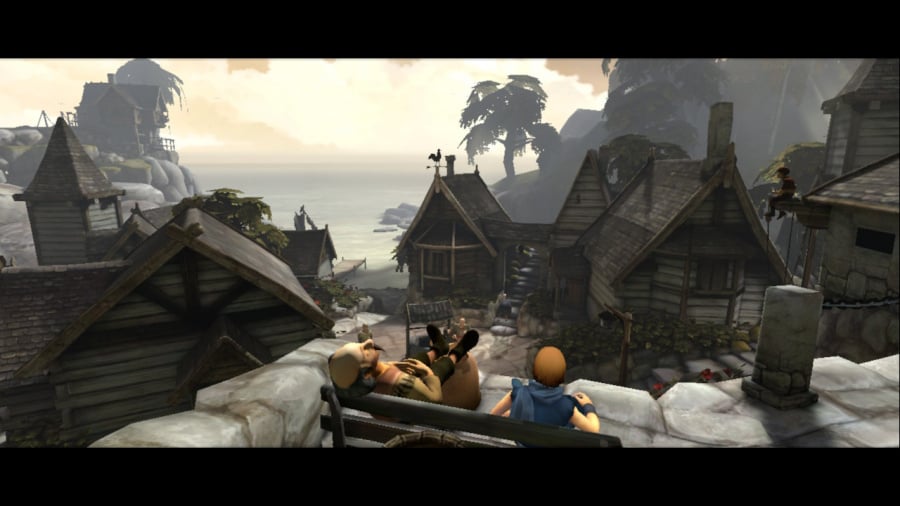 When Brothers: A Tale of Two Sons first wandered onto Xbox 360’s wonderfully indie-centric marketplace in 2013, it brought with a new meaning to the term ‘co-op’. With a new generation of consoles mere months away, Payday 2 developer Starbreeze Studios captured the imaginations of critics and players alike. It was a co-op game for people who don’t actually like sharing space and responsibilities with another person, with both of its titular siblings controlled with either joystick on the same pad. Frustratingly short but utterly beguiling, Brothers has remained one of the previous gen’s most beloved curios. 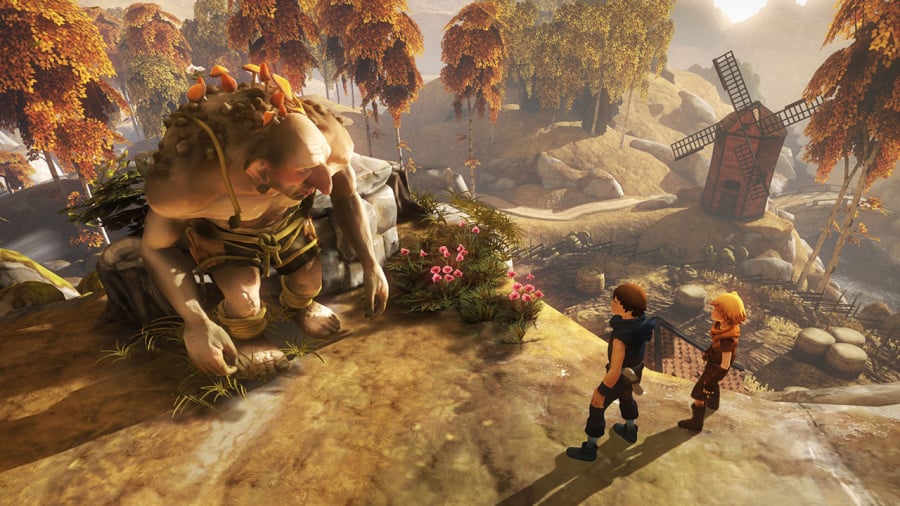 It’s been years since Starbreeze sold the rights to Brothers off to Italian publisher 505 Games – and a fair few since outspoken director Josef Fares moved off to form a new studio and produce the enjoyable (and very similar) A Way Out for EA – but Brothers, like so many other games of yesteryear, has been revived for current tech, and that includes some fundamental new changes to the version that’s wandered onto Nintendo Switch. Now it’s a both a single-player co-op game and a traditional two-player experience.

For many, Brothers’ unusual approach to agency was either a stroke of mechanical genius – each brother’s movement is mapped to one of the sticks, with that respective trigger button serving as their contextual action button – or an impenetrable concept that conjured more frustration that satisfying magic. So, 505 Games has made the most of Switch’s heavy support for local multiplayer games by simply dividing control between players. The solo format is still there for those that want to experience Brothers in its original form (you can even swap between the two at will via the pause menu), but the decision to include a more traditional co-op experience does take away some of the game’s original appeal. 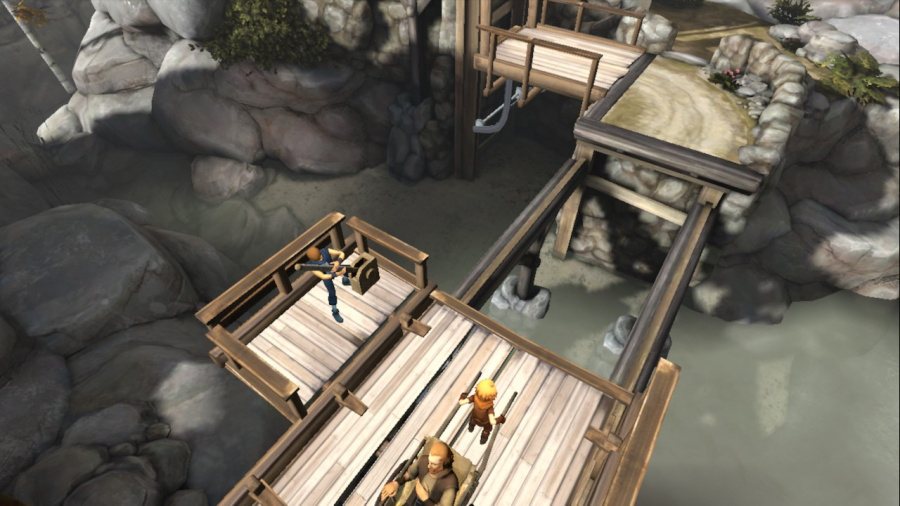 Nearly six years on from its original release on Xbox Live Arcade, Brothers’ control scheme can still be a little confusing – even for players who have finished it on other platforms. Regardless of where each sibling is on screen, the stick that controls them remains the same, so learning to remember that Naiee is on the right stick, and Naia on the left can be a brain-boggling experience – especially when they’re now on the opposite side of the screen. Luckily, a hour or so in and the setup soon becomes second nature, but it will feel very alien to begin with.

There are no such problems when you’re playing in co-op and you’ve split the Joy-Cons between you, but by introducing a second player Brothers does lose the plate-spinning challenge that helped make it such a unique solo adventure. Environmental puzzles, stealth sections and boss encounters simply aren’t quite as difficult when playing with a friend and the game’s final twist somehow loses some of its impact when you experience it as a team. It’s still an engrossing story, but making it traditionally co-op in nature does tear apart its most notable USP.

Thankfully, it isn’t just the control scheme that’s helped Brothers carve out a cult status, but the experiences that the excitable Naiee and his prickly brother Naia experience throughout their ‘tale’. From the opening shot of its menu screen where Naiee kneels by the cliff-side grave of deceased mother to the final section of the game – which we won’t spoil only to say it’ll stay with you long after the credits roll – Brothers is a kaleidoscope of emotion. Opting to avoid intelligible dialogue, Fares and his team craft a believable bond between to young siblings. One full of exuberance for the adventure to come, the other slowly being forged by the premature responsibilities of adulthood, Naiee and Naia squabble and bond in equal measure in a way that feels natural and believable. 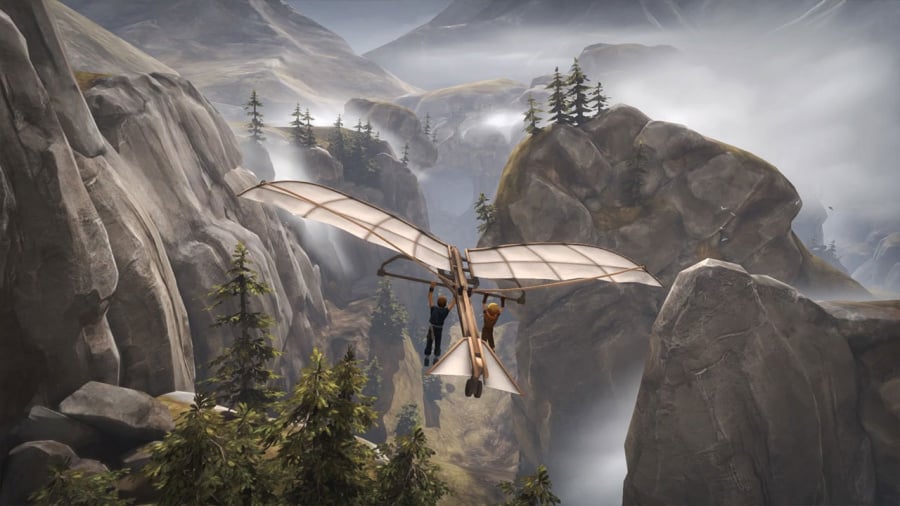 One of many things that makes Brothers so beloved is how well it weaves the story of other characters into its narrative. You might be on an adventure to find a remedy for your ailing father’s health, but along the way you’ll make music to help ease someone’s grief, reunite a pair of love birds and so many more. While linear in its design, it’s still easy to miss these little moments, so extra playthroughs will certainly add more stories to your memories of Brothers. Even seeking out all the benches – which enable the duo to take a moment’s respite and enjoy countless panoramic vistas – is a rewarding side-quest in itself.

This ‘remastered’ version comes with a set of achievements (based off the original achievements for the Xbox 360 versions) so Switch players can at least get some of the satisfaction of seeing a notification pop on screen, even if it isn’t contributing to an overall gamerscore. There’s also a ‘Director’s Commentary’ track. Unfortunately, this track isn’t interspersed throughout the game in the same manner as Gone Home or Firewatch, but instead its a 50-plus minute video found in the menus. It’s a little low quality, and while it is a genuinely interesting watch (including trivia on how the game was made), it’s strange 505 Games didn’t find a more intuitive way to share this existing footage. 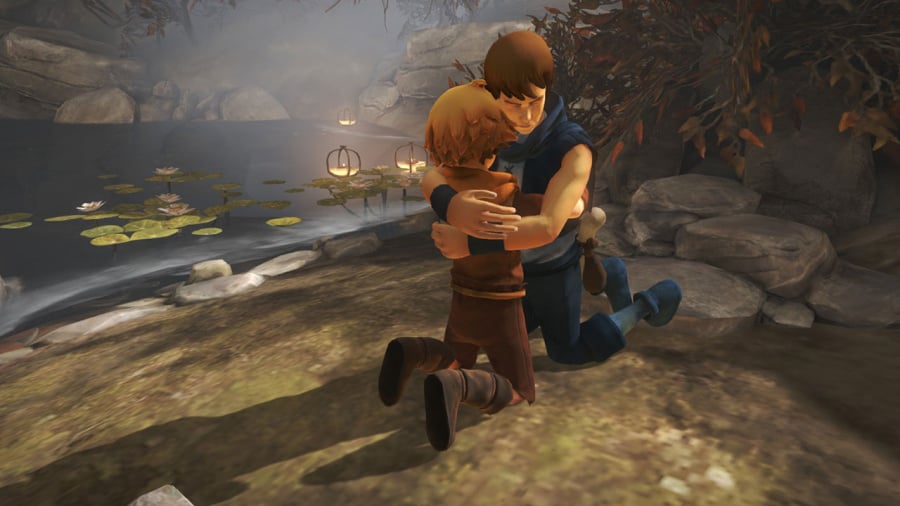 Technically, the Switch port of Brothers is nearly identical to the one released on PS4 and Xbox One almost four years ago. All the extras are the same (a concept art gallery, access to the entire soundtrack and the aforementioned commentary video) with only the co-op mode serving as an actual exclusive at this point. From a technical perspective, it runs nice and smoothly. There are occasional moments where a certain texture looks a little too washed out, or where shadows stand out a little too much against their background, but overall it’s another solid port on Nintendo’s latest hardware.

As poignant, heartbreaking and memorable as it was back in 2013, Brothers: A Tale of Two Sons hasn’t lost any of its emotional impact in those intervening years. With a captivating soundtrack, an aesthetic design evocative of Fable and a genuinely clever take on co-op, you can really see why it’s held in such high regard. The new traditional co-op mode does offer a new way to play, but it also robs the game of one of its most challenging and rewarding features. While there’s not much here to coax back players who have already experienced Brothers, those that enjoyed Unravel Two will certainly revel in its co-operative charms.